More than a century after his death, the Missourian is still the “exemplary American" in Deutschland 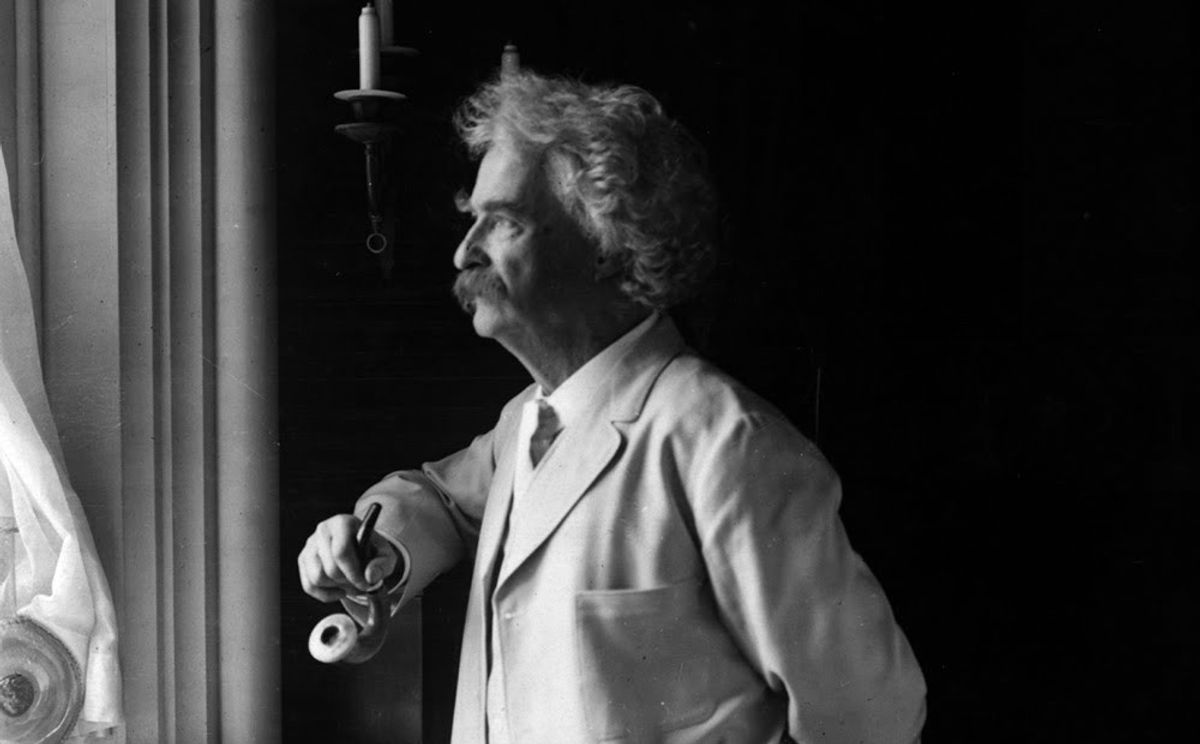 BERLIN, Germany — At the end of the newest children’s film in Germany, a man with a white mustache, wild hair and twinkle in his eyes makes an appearance.

Carefully removing a bullet from the side of a runaway slave named Jim, he sits down to light his pipe. A red-headed boy with bright eyes and ragged clothes asks if he’s a doctor.

The boy puts out his hand. “I’m Huck,” he says. “Huckleberry Finn.”

Most German viewers of “The Adventures of Huck Finn” will have already known that. Director Hermine Huntgeburth says she added Twain to give the story’s end a “peaceful quality.” But it also introduces a figure who’s arguably better known in Germany than the characters he created.

Winfried Fluck, a professor at the John F. Kennedy Institute for North American Studies at Berlin’s Free University, says Twain is often the first person to come to mind when Germans think of Americans.

“He’s the exemplary American for us,” he said. “It’s the combination of two worlds we associate with America — he’s authentic and entertaining. And that’s rare.”

Mark Twain — the pen name of Missourian Samuel Clemens — was published in Germany early on and became popular after his travel book A Tramp Abroad detailed the months he spent living in southwestern Heidelberg in 1878.

More than 130 years on, there appears to be no end in sight to his status, with the new film, an illustrated version of his novel The Mysterious Stranger and the translation of his autobiography being released here within months. And in what Twain described as “the awful German language.”

Twain came here to escape his growing popularity in the United States and concentrate on writing a new book. He wanted to find "some German village where nobody knows my name,” he wrote a friend, according to Twain expert Holger Kersten.

In A Tramp Abroad, Twain describes looking down at the city and the Neckar River from Heidelberg Castle, saying he “never enjoyed a view which had such a serene and satisfying charm about it as this one gives.”

German critics saw the book as a compliment to the country, said Kersten, a professor at the Otto-von-Guericke University of Magdeburg. In the 1930s, articles called Twain a “loyal friend of Germany.”

Visitors to Heidelberg today can take a tour that describes Twain’s impressions. Although it’s available in many languages, it’s most often booked in German, says one of the guides, Charlotte Frey.

“Mark Twain is always an adventure, and he was such an in-depth person,” she said.

Twain also wrote about Berlin, where he briefly lived during the early 1890s and which he described as the German Chicago.

He detailed his frustrations with the German language in his essay “The Awful German Language.” First published as an appendix to A Tramp Abroad, the essay is available separately in German bookstores.

“A person who has not studied German can form no idea of what a perplexing language it is,” he wrote. “Surely there is not another language that is so slipshod and system-less, and so slippery and elusive to the grasp.”

Twain was one of the few Western writers also to be widely read in communist East Germany, where the authorities permitted his works because of their social commentary on American life and criticism of U.S. imperialism in some of his later writing.

A contemporary German artist known as ATAK illustrated the new version of Twain’s The Mysterious Stranger, his unfinished, posthumounsly published novel set in an Austrian town in the Middle Ages. Born in the eastern German city of Frankfurt an der Oder, ATAK said at a recent presentation that the book had a great impact on his adolescence.

The artist included illustrations of images from modern history, such as a Wehrmacht soldier shooting a kneeling concentration camp inmate.

For some experts, the most striking aspect of the ongoing interest in Twain is the popularity of volume 1 of Twain’s Autobiography.

Helmbrecht Breinig, a professor at the Friedrich-Alexander University in Erlangen-Nuremberg, says Germans still find his observations relevant because he identified American shortcomings.

“If they read his autobiography and see his opinions, they can say: ‘It is still the same — America is still trying to dominate the world,’” he said.

Boris Schoenfelder, who produced the recent Huck Finn movie and “Tom Sawyer” before it, says the stories also made a large impression on him as a child.

“Tom Sawyer” has been sold to more than 20 countries since its release, although not the United States, Schoenfelder said.

“I guess there was kind of a reluctant approach to our film [in Hollywood] because they didn’t know why Europeans would want to do such an American story,” he said. “But for us it became quite natural.”

Not all of “Huck Finn” translates well into German, however. Film director Huntgeburth said viewers unfamiliar with 19th-century American history needed to be given some context. She said she included a voiceover with historical background after realizing young viewers in test audiences didn’t understand a word central to the story: slavery.