My year without makeup

Tired of being a slave to my appearance, I gave up all the trappings of beauty -- and ended up discovering myself 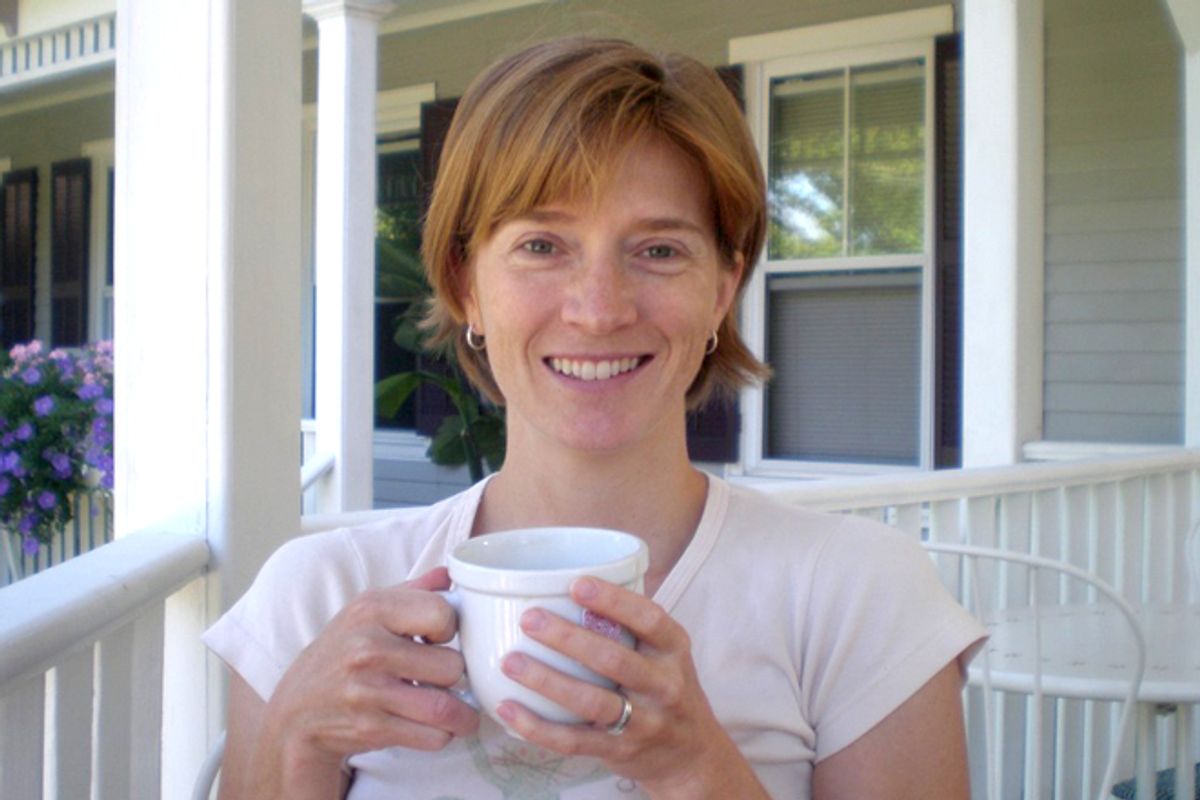 The following is adapted and excerpted from "The Beauty Experiment: How I Skipped Lipstick, Ditched Fashion, Faced the World Without Concealer, and Learned to Love the Real Me."

This is who I am: a woman. I’m a daughter, a sister, a friend, a wife, and a mother. At age seven, I was a girl with braids and rainbow hair clips, and at thirteen, I became a teenager with acne, orthodontics, and teased bangs. At nineteen, I was a college student battling her freshman twenty-five, then a new graduate with a discount poly-blend office wardrobe. For nearly a decade after that, I was an independent young woman in confusing relationships who paired thrift-store finds with designer shoes. At twenty-eight, I became an overjoyed fiancée with a shiny new ring, then an anxious newlywed with a new mortgage. When I was thirty-one, I swelled up into a pregnant goddess with superlative melons, then collapsed, nine months later, into a zombie with magenta undereye bags. Then that happened again. Today, at thirty-seven, I am a busy work-at-home parent and spouse. On most days, I wear jeans, and shoes with traction. I have a yoga membership I probably won’t use up. On Fridays, I drink a beer in front of the television and fall asleep before ten.

Despite this remarkably average female chronology, I feel I have one small, hard-won feature that is extraordinary. It is this: When I look in the mirror, I don’t see wrinkles, anxiety, zits, or exhaustion, although they are all there. Instead, I see a face, a person, a personality, a life. If someone asked me if I felt beautiful, I would have to answer honestly: yes.

I didn’t start out this way. Some might call me “low maintenance,” but in the three-and-a-half decades of my life, I’ve done hundreds of ridiculous, bizarre, and embarrassing things in beauty’s name. I constipated myself with chocolate diet shakes the summer I was fifteen. I broke in a pair of punishingly uncomfortable high heels by wearing them with hiking socks and jogging laps around a parking lot. I was caught kickboxing in my room wearing three sweaters and a raincoat in hopes of dropping weight before a college formal. Convinced of the powers of exfoliation, I tried to scrub the cystic acne off my back with a foot pumice. I once paid a great deal of money for a bikini wax that left me polka-dotted with blood from the crotch down, and another time, I mutely obeyed a teenage beauty technician who barked “Lie still” while caustic eyelash-dying solution burned under my lids. I felt perversely thrilled, afterward, that the treatment had only fogged my peripheral vision. I had not actually gone blind.

In college, I was an anthropology major, trained to recognize ritualistic, illogical, and masochistic behaviors in other cultures. But when it came to my own beauty craziness, and the insistent voice in my head that drove me to it, I simply didn’t care to question. This crap seemed trivial, and I had so many other, better, things to think about: my professional aspirations, my love life, and the world around me. Sure, my own lack of physical beauty and constant need for personal correction and enhancement were often foremost in my mind—usually when I wished they weren’t—but I assumed that one day I’d simply outgrow the freaky diets, the wardrobe crises, and the occasional substitution of prettiness for poise. For thirty-two years, I lived with the enigma of my female beauty craziness the way I lived with the Bermuda Triangle: it was weird and creepy in its persistence, but not my problem to solve.

Things changed in late 2005—or began changing then. I was living in San Francisco with my husband, John, my best friend and the great love of my life, when he was transferred to Hong Kong by his company. This was something we’d both long been hoping for: John is a Chinese American who was born in Taiwan, and this move would give him a chance to reconnect with the Chinese culture and language as an adult. As an avid overseas traveler, I was thrilled to be going abroad for more than a few weeks. We’d been in San Francisco only a few months anyway—I had yet to establish a professional or social network and figured I could write anywhere. My employment opportunities in Hong Kong were less clear, but in the weeks before the move, I fixated on another joyful development: I’d just become pregnant with our first child. John worried about having our baby so far from family, but I brushed these concerns off. This was adventure! This was life!

Our flight to Hong Kong was my first business-class seat ever, and we were met the day after our arrival by a team of relocation specialists—both Chinese and European—in silk scarves, bejeweled shoes, blowouts, and Chanel suits. (They might have been knockoff Chanel suits—but how would I know? Forty-eight hours earlier, I’d been munching spirulina bars from the Rainbow grocery and selling engineered socks to female triathletes in Noe Valley.) These relocation specialists came with advice for a wide-eyed and inexperienced expatriate, and I listened up. At their recommendations, we picked a private hospital and a safe, convenient address (with a pool!), and I joined a women’s club. I went to some events and started making lunch dates. Hong Kong, like many other cosmopolitan cities outside America, is a place where street shoes vastly outnumber sneakers, and since it seemed the thing to do, I started dressing up for those lunch dates. I began wearing foundation to the grocery store and drifting into shops to sample hundred-dollar cosmetics. When I went to the hospital to have our baby, I took mascara along for those all-important first pictures and postpartum visits—all from people I’d known only a few months.

When the baby weight didn’t come off as fast as online forums promised, I tried to counteract my hideous rib cage spreading by wearing a spandex corset five hours a day. I bought thicker makeup and brighter lipstick to disguise the haggard face I met in the mirror. Weekly, sometimes daily, I found myself digging through bins at a street-side sample warehouse near our apartment, believing something at the bottom of the bin would have the power to make me happy, or satisfied, or sexy, or whatever it was that suddenly, inexplicably, I wasn’t.

In February 2007, I threw up the white flag of surrender. I had become a nervous, critical, angry, insecure woman. I was not the woman or the role model I wanted to be, especially in front of a big-eyed baby daughter. I was at war with the world around me and at war with myself—the only self I had. And so I swore off Beauty and all her trappings: makeup, new clothes, salon haircuts, jewelry, the works. I told very few people what I was doing, took detailed but sporadic notes, and had only a vague sense of a goal: something needed to change for the better.

Technically, my beauty experiment lasted for a little more than a year. It was a strange, uncomfortable thirteen months, and while I’d like to report that it magically cured me of beauty craziness, it did not. What happened was more like what happens when you stare at those poster-size optical illusions, the ones that look like a chaos of computer-generated black dots—at first. If you look at the dots long enough, though, unfocusing your eyes and relaxing your brain, a scene emerges in the chaos. A happy dolphin swims through a hoop; fish flicker behind stalks of kelp. The picture becomes startlingly clear, and you can’t believe you ever missed it. It was these kinds of shapes and patterns I noticed during the year of my experiment. They were often surprising, sometimes confusing, and usually didn’t reflect well on me. Some were so elemental they seemed impossible to change. The woman I was at the end of my beauty experiment differed from the woman who started it, but I was still making journal entries filled with questions, not answers.

Since then, I returned to the U.S. and had a second baby while the first began to confront the world of shopping malls and miniature plastic-glitter high heels. I made new friends but had familiar conversations about beauty craziness. I did research and read books and discovered a world beyond my own experience where culture, gender, and economic identities are as jumbled up as junk in a messy purse. And I came to understand that beauty is a lens through which to read many aspects of female experience.

I’ve changed since my experiment, but you might not know it to look at me. Imagine a set of makeover shots, only the before and after don’t look so different— same face, same body, same wardrobe, more or less, just a few years further into life. The difference is that the woman in the “before” shot is forever looked at.

In the after shot, the woman in the picture is the one seeing.

Phoebe Baker Hyde has written for a variety of publications including the journal Confrontation and The Los Angeles Times Magazine. She lives in Boston with her husband and two children. She is the author of "The Beauty Experiment," from which this essay is excerpted.