"Silver Linings'" — and "Argo's" and "Lincoln's"— playbook on winning an Oscar

With nine films vying for best picture, studios are clamoring for voters. Here are some suggested talking points 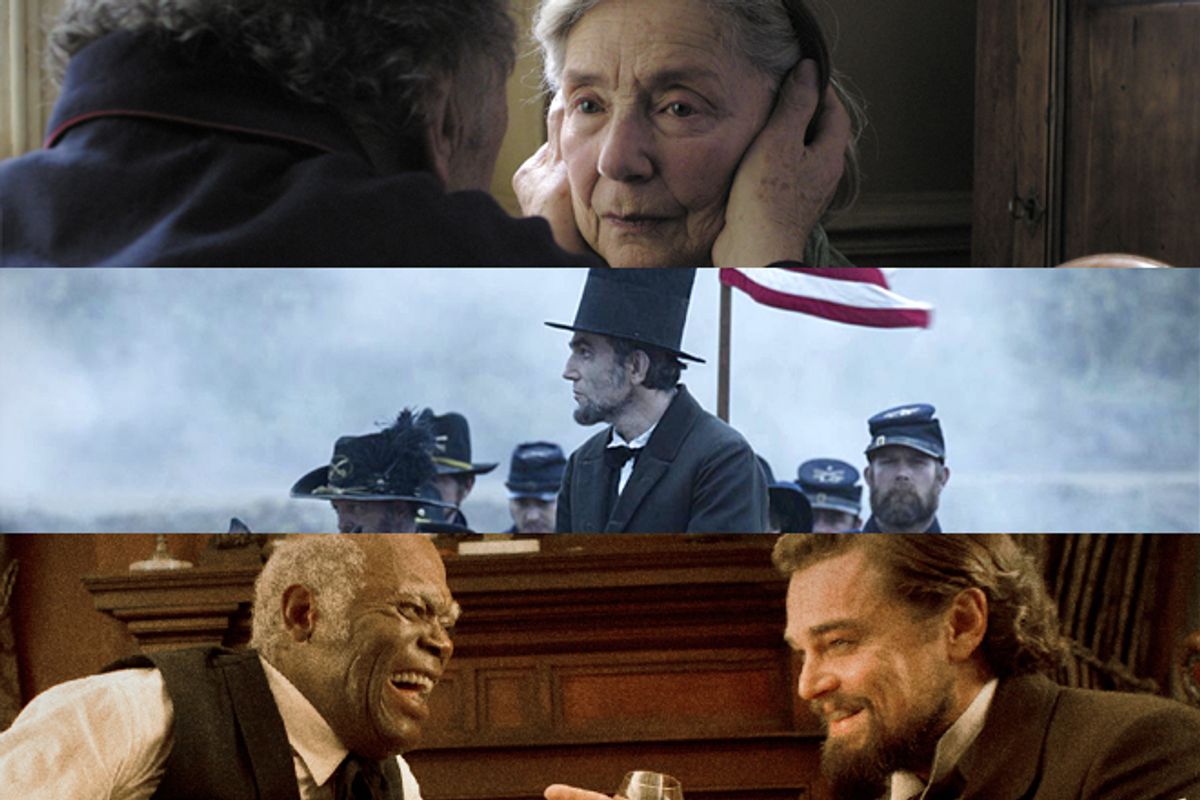 The most unpredictable Oscar race in years got a bit more clarity today, as the best picture field was winnowed to a slightly more manageable nine (the same big number as last year) and a surprising five auteurs got the best director tap. Among them were expected nominees Ang Lee for "Life of Pi," Steven Spielberg for"Lincoln" — and then three moderate surprises in Michael Haneke for "Amour," David O. Russell for "Silver Linings Playbook," and Benh Zeitlin for "Beasts of the Southern Wild" (his first feature film). That means no Ben Affleck for "Argo," no Tom Hooper for "Les Misérables," and, in the biggest upset of all, no Kathryn Bigelow for "Zero Dark Thirty," throwing the race into disarray. Here's the path forward for a few best picture nominees, with the talking points that their teams may well be hitting hard as the voting period begins.

Getting a best picture win without a best director nomination is rare, but not impossible: "Driving Miss Daisy" pulled it off in 1989. And "Daisy" had the same big, broad-strokes approach to social ills that "Les Miz," with its Occupy-friendly themes of rectifying systematic inequality, boldly displays. (We may very shortly see ads in Variety, the Hollywood Reporter, and online citing the film's relevance.) The film is one of only two films (more on the other one later) to get support from every precursor-awards body for which they were eligible, and has two nominated actors, Anne Hathaway and Hugh Jackman, who are both charismatic and press-friendly.

The film that looked to be far out of the race — a slight comedy in a year of heavy-hitters — suddenly looks more relevant than ever. It's the first film to get picture, director, lead actor and actress, and writing nominations since "Million Dollar Baby" and the first film to get nominations in all four acting categories since — are you sitting down? — "Reds." Expect a lot of touting of this broad level of support, making the modest box-office draw look like the front-runner it may indeed be. Jennifer Lawrence's ubiquity (on magazine covers, on the next "Saturday Night Live") will likely be matched by her three costars' in the weeks ahead, as producer Harvey Weinstein knows that the actors' branch is the most powerful in Oscar voting, and actors clearly love the film.

Though it didn't nab any acting nominations, "Life of Pi" is more about its technical accomplishment; it's looking to do what "Hugo" and "Avatar" couldn't and be the first 3-D best picture. Expect trade publication ads touting just how difficult it was for Ang Lee (a universally admired director who's done very well in precursor award nominations) to pull off the CGI tiger and the huge sea, and congratulating him on the biggest financial hit of his career.

Don't cry for Ben Affleck: He's still a best picture nominee as producer of "Argo," and one well-timed crack at the Golden Globes could get him back in the race. For a film that failed to crack the director shortlist, "Argo's" support is surprisingly broad, including best film editing, a very difficult category for a best picture winner to bypass. (The last time a best picture winner wasn't among the top five best edited? "Ordinary People," in 1980.) The film is expanding its theater count this weekend.

Also expanding this weekend — opening nationally for the first time — is a film that looks precarious. The controversial "Zero Dark Thirty's" weak level of support is indicated by, for instance, the one sound nomination the film picked up. (No more a technical marvel, Kathryn Bigelow's previous film, "The Hurt Locker," won both sound awards.) Bigelow, despite her lack of a best director nomination, is a widely respected figure, and her comments at the recent New York Film Critics Circle Awards indicate that her new press strategy is to be aggressive and outspoken about how her film depicts torture.

That relevance argument comes into play once more with "Lincoln," which gets to say it's about a president who healed rampant partisanship, making "Silver Linings Playbook" look small-bore by (perhaps unfair) comparison. With 12 nominations (the most) and as the only film other than "Les Misérables" to get hailed by every precursor group, it's looking pretty secure and needs only to come to seem so inevitable that voting against it would be futile. Like its subject, it needs to unite a fractious and factionalized body.