Why does anyone take Sam Harris seriously? 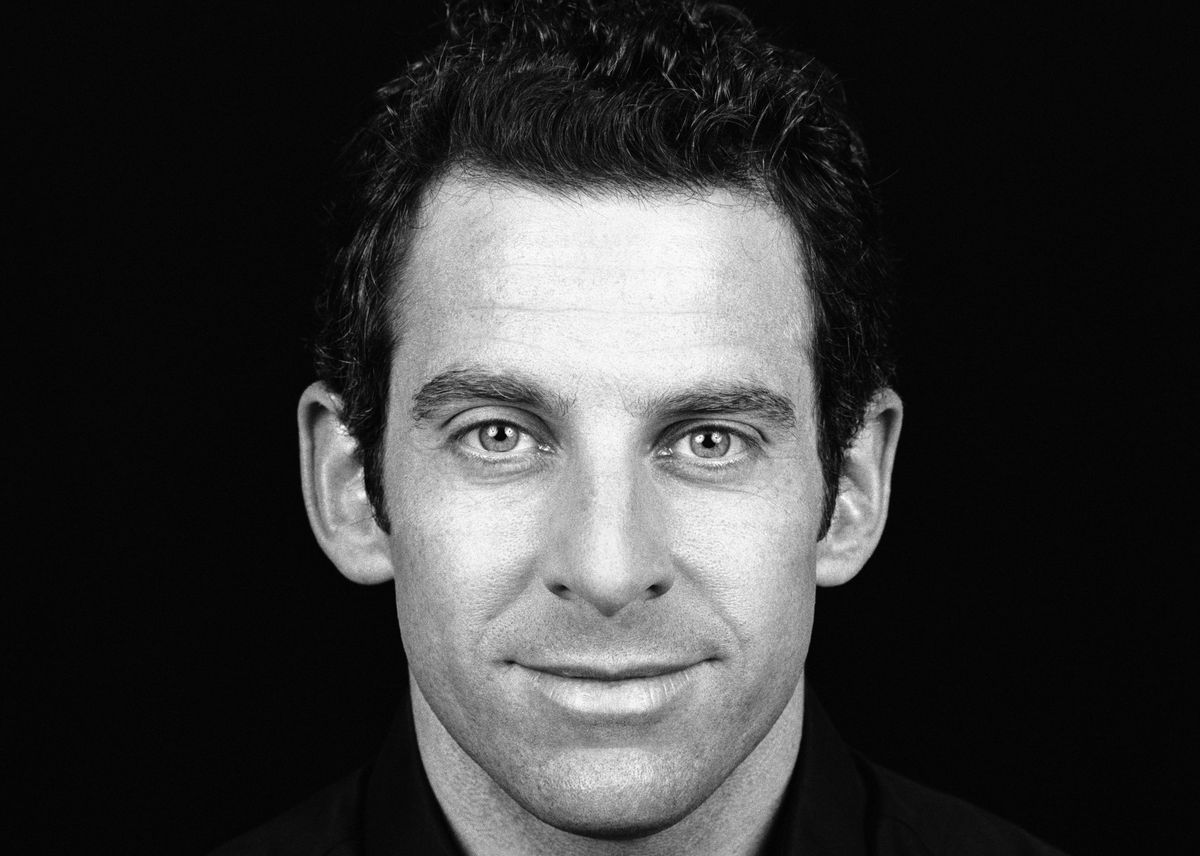 There are many mysteries posed by this world for which science offers no answer: Why are we here? What is the meaning of life? Who let the dogs out? And, perhaps most confounding, why does anyone take atheist pundit Sam Harris seriously?

In response to the Sandy Hook massacre, Harris stopped sputtering about Muslims long enough to weigh in with a post Sandy Hook essay, "The Riddle of the Gun." Unlike the above mysteries, however, the gun is no riddle. As the NRA recently reminded us, firearms are merely a tool. They can be used as a sturdy hammer, a nifty paperweight, a handsome tie clip, a rather crap spaghetti strainer, and, in a desperate pinch, as a convenient murder weapon! Guns are as far from a riddle as one can get. The numbers are brutally simple. According to this Harvard study, and the least bit of common sense, more guns = more gun homicides. And expounding on this topic, without accepting that fact as the moral epicenter of your argument, is tantamount to protecting gun rights over the lives of innocents. Harris, in his continuing quest to overcome the vicious stereotype that atheists are typically rational people, takes a page from NRA President Wayne LaPierre's handbook of douchebaggery, and suggests the answer to the "riddle" of guns should be, in fact, more guns. Only a corporate shill or a professional philosopher could arrive at this position without realizing (or admitting) how utterly full of shit they are.

Sure, we'd all prefer for this to be a "don't feed the troll" type situation, but as of this writing Harris's gushing paean to gun violence (and considering the research cited above, describing it as anything other would be incredibly disingenuous) has received 44,000 Facebook likes, so perhaps it's best to feed this unwitting troll the fatal poison for which he has apparently no natural immunity: logic! And, after nearly a decade of ostensibly sincere intellectual sewage, Harris is straining Poe's Law with introductions like this: "Fantasists and zealots can be found on both sides of the debate over guns in America." Ah, yes, all those awful zealots with their fanatical designs on protecting small children from senseless, preventable gun-murder -- based on the simple truth that guns cause death. Tell us more, o convoluted one!

"On the one hand, many gun-rights advocates reject even the most sensible restrictions on the sale of weapons to the public. On the other, proponents of stricter gun laws often seem unable to understand why a good person would ever want ready access to a loaded firearm."

The lesson here is that Sam Harris has two hands. Two extremist and falsely equivalent hands. And he can count them both! But rest assured, good reader:

"Between these two extremes we must find grounds for a rational discussion about the problem of gun violence."

Phew! I was beginning to think this was going to be yet another one of Harris's patented fake-smart-for-dumb-people routines wherein he constructs a series of strawmen then proceeds to knock them down. Oh wait. That's exactly what this is. Harris fails spectacularly to provide the advertised rational discussion.

Before delving further into this NRA wet-dream of an essay, let us reflect on an important facet of Harris's personality. The common thread running through all of Harris's logic-abortions, the key to understanding how a purported "intellectual" can be so consistently wrong and so morally repugnant, is his unbridled cowardice -- both of the intellectual variety and an all-pervasive, crapping-his-pants fear that manifests itself in the form of  sophistry and a brazen disregard for following the available evidence to its logical conclusion.

Harris's fears, like much of his "philosophy," are arbitrary and logically inconsistent. After several column inches of rock-hard gun-boner, wherein he confesses a deep and abiding love for his own weapons, the setup for this ode to American gun-rights madness is to claim that firearms are the only reasonable answer to hypothetical knife-wielding lunatics:

"A world without guns is one in which the most aggressive men can do more or less anything they want. It is a world in which a man with a knife can rape and murder a woman in the presence of a dozen witnesses, and none will find the courage to intervene."

Guns level the killing field. Got it? Or were you too busy raping someone at knife-point, you disgusting liberal zealot?! Of course, a world with guns growing on trees would leave us all subject to the whims of the most aggressive, and heavily armed, gun owners. This is a point Harris doesn't quite realize he makes further on in the essay when describing the futility of the Second Amendment to protect the individual citizen (or militia) against a tyrannical federal government in possession of fleets of Predator drones armed with Hellfire missiles.

Harris displays a true talent for contradicting himself. In addition to the above paragraph, he writes that well-trained, "good" people need guns to protect themselves against dangers they may encounter outside of their homes, yet, "[l]ike many gun-control advocates, [he has] serious concerns about letting ordinary citizens walk around armed." But I guess this is the nature of the riddle, the enigma; the dogmatic asshole masquerading as a reasonable arbiter.

In an attempt to calm presumably unwarranted hysteria over mass shootings, Harris offers "some facts about guns":

"Fifty-five million kids went to school on the day that 20 were massacred at Sandy Hook Elementary in Newtown, Connecticut. Even in the United States, therefore, the chances of a child’s dying in a school shooting are remote. As my friend Steven Pinker demonstrates in his monumental study of human violence, The Better Angels of Our Nature, our perception of danger is easily distorted by rare events."

Ha. HA! HAAAAAAAAA! Excuse my vulgar Chris Matthews-esque guffaws, but anyone familiar with Harris's rise to prominence as a post-9/11 fearmonger, torture apologist, and war-hawk can surely forgive me this slobber-mouthed transgression. HAAAAAA! Jesus Muhammad Nugent! It's as if the man lacks any self-awareness whatsoever.

Americans are far more likely to die at the hands of a--usually--white, gun-totting maniac than they are to be murdered by an Islamic terrorist, so Harris's "calming" statistics only serve to demonstrate his own epic hypocrisy.

"We still have more guns and more gun violence than any other developed country, but the correlation between guns and violence in the United States is far from straightforward. Thirty percent of urban households have at least one firearm. This figure increases to 42 percent in the suburbs and 60 percent in the countryside. As one moves away from cities, therefore, the rate of gun ownership doubles. And yet gun violence is primarily a problem in cities. It is the people of Detroit, Oakland, Memphis, Little Rock, and Stockton who are at the greatest risk of being killed by guns."

The obvious connection between crime-related gun violence, or the asymetrical form of warfare known as "terrorism" (because the Iraq War wasn't terrorism!), and socioeconomic status is totally lost on Harris. No surprise. Harris goes on with a "I'm not saying X, but I am saying X, so what the hell's my point?" form of masturbatory argumentation. Knives can be just as dangerous as guns, as evidenced by a recent slew of attacks in Chinese schools, except they're really not as deadly, and--yet again--guns are the only real defense against knife-wielding maniacs. Then there's some more fake-sagacious obfuscation, like considering the astounding number of people who die of infection each year because hospital employees don't wash their hands well enough, followed by the immediate admission they're not the same problem, nor does contrasting the two phenomenon offer any insight whatsoever. So aside from learning that Sam Harris has two hands, one of which is made of straw, we see that he could benefit from an editor--or maybe just shutting the fuck up, rather than subjecting his readers to pointless circumlocution.

Here's where we reach the most telling paragraph--a glimpse into Harris's stunning intellectual cowardice:

"In the vast majority of murders committed with firearms—even most mass killings— the weapon used is a handgun. Unless we outlaw and begin confiscating handguns, the weapons best suited for being carried undetected into a classroom, movie theater, restaurant, or shopping mall for the purpose of committing mass murder will remain readily available in the United States. But no one is seriously proposing that we address the problem on this level. In fact, the Supreme Court has recently ruled, twice (in 2008 and 2010), that banning handguns would be unconstitutional."

No one is seriously addressing the problem on this level. No one. What, did you read someone doing that? Well, they must not have been serious. All those liberal zealots who've heard calling for a ban similar to the one the United Kingdom put in place after a similar school massacre in '96--a ban that, despite the statistical spin your favorite radio fascist has put on it, has reduced gun violence there in the long-term--were engaged in parody. And you thought they were serious, you dumb bastard. That's always been a transparent tool in Harris's kit of intellectual dishonesty--if you don't agree with Sam Harris, whether you have good reason or not, you and your ideas are just not serious enough for Sam Harris banning handguns? "[T]hat's not going to happen," says Harris. Due to the two very recent Supreme Court cases he cites, in the short-term, he's quite correct. Clarence Thomas is not going to suddenly reverse his position. Antonin Scalia won't have an epiphany regarding his unconscionable perversion of "strict constructionism" (militias ≠ individuals, per the English language).

But knowing what we know (or in Harris's case, choose to ignore or subvert), that more guns = more gun homicide, it's the responsibility of non-assholes to quite seriously propose addressing the problem on that level. Harris shrugs off this responsibility in the same cowardly way thousands of conventional-wisdom-worshipping, status-quo-peddlers have done throughout history. Abolition of slavery? That's not going to happen. Women's suffrage? Not going to happen. Civil Rights? No way.

While any random selection of Harris's essay is worthy of derision, I'm going to start wrapping this up, though I encourage you (especially my fellow atheists) to read his nonsense in its entirety and vent in an appropriate fashion. Before signing off, however, I have two remaining tasks: addressing Harris's aforementioned egregious lack of self-awareness, and issuing a sort-of challenge to my fellow atheists. As promised, the offending passage:

"But again, any law that allows us to commit or imprison people on the basis of a mere perception of risk would guarantee that large numbers of innocent people will be held against their will."

Those familiar with Harris's record will have already spotted the logical inconsistency. For those blissfully unaware of his many crimes against thinking, the uncharacteristically sound reason Harris gives above for not imprisoning all mentally unstable people is precisely the "common sense" reason he'd previously used to justify a policy of Muslim profiling at airports. (For the satisfaction of reading security expert Bruce Schneier deliver Harris a much-deserved drubbing, see here.) Granted, committing people to a cuckoo's nest is a great deal more severe than subjecting them to airport screenings, but there's probably a folksy aphorism I can conjure to make this work--apples and oranges are both fruit, if you get my drift. Yeah. That'll do the trick, just like a junebug in May, or Dan Rather in a Texas teapot.

The ultimate tragedy of Harris's article is that he touches on the answer to "the riddle of the gun" only to dismiss that answer as existing beyond the parameters of debate. Unlike god or gods, that's one of those things that's true if you say it's true, and false if you say it's false. Harris is, confoundingly, a popular figure, capable of shifting the frame of acceptable discourse. Why doesn't he give it a go? Well, that may be the biggest mystery of all.