Whether fulminating on rape or trying to defund Planned Parenthood, the GOP returns to its pre-election playbook 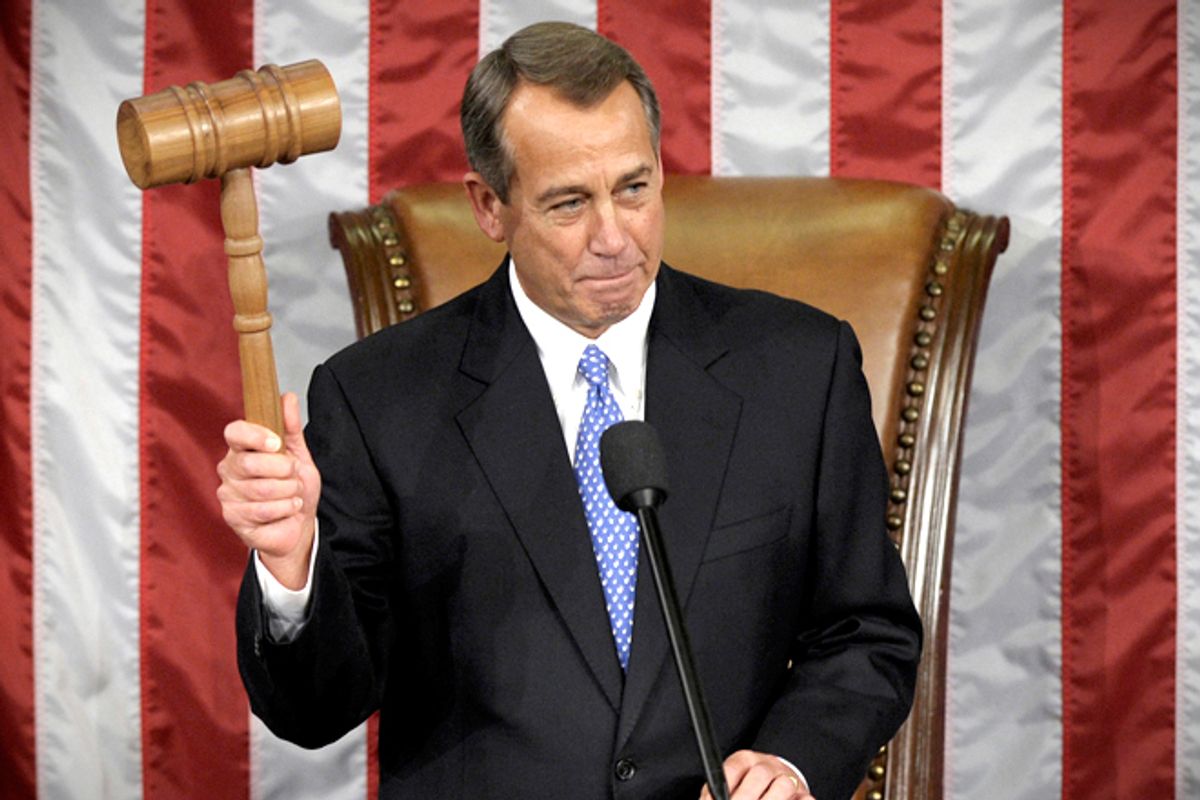 Last year, Republicans spouted off on women lying about rape and our bodies shutting down pregnancy. Republican state legislators contemplated draconian abortion restrictions, and the Republican-controlled U.S. House of Representatives kicked off the legislative session by trying to defund Planned Parenthood.

This year, only a few days into 2013, a Republican has spouted off about women lying about rape and our bodies shutting down pregnancy. States are at it again, and the House has kicked off the legislative session by trying to defund Planned Parenthood.

Happy new year, everyone: The  GOP soul-searching is over, and Republicans are back to square one on reproductive rights.

Today's congressman seeing to add his name to the illustrious rape-explaining pantheon is Georgia Republican Phil Gingrey, one of several antiabortion gynecologists serving in the House. “Part of the reason the Dems still control the Senate is because of comments made in Missouri by Todd Akin and Indiana by Mourdock were considered a little bit over the top,” Gingrey explained at a recent breakfast.

But, he said, Akin had simply been misunderstood: "What he meant by legitimate rape was just, look, someone can say I was raped: a scared-to-death 15-year-old that becomes impregnated by her boyfriend and then has to tell her parents, that’s pretty tough and might on some occasion say, ‘Hey, I was raped.’ That’s what he meant when he said legitimate rape versus non-legitimate rape. I don’t find anything so horrible about that. But then he went on and said that in a situation of rape, of a legitimate rape, a woman’s body has a way of shutting down so the pregnancy would not occur. He’s partly right on that."

Gingrey has clearly done Akin a favor by reminding everyone that what he meant was not that some rapes are legitimate, but that some women are liars, and thus don't deserve a visit from the abortion fairy.

As for bodies shutting things down, Gingrey said he often told infertile couples that the woman just needed to relax. "So he was partially right, wasn't he?" In theory, for those "lucky" rape victims who get advance directives of their assault -- though habitually abused people get pregnant all the time. Gingrey went on, “But the fact that a woman may have already ovulated 12 hours before she is raped, you’re not going to prevent a pregnancy there by a woman’s body shutting anything down because the horse has already left the barn, so to speak. And yet the media took that and tore it apart.”

Gingrey, an alleged defender of science, would like you to know that it is so unfair that a then-member of the House Committee for Science, Space and Technology got "torn apart" for promulgating false science in the interest of public policy.

In the meantime, two Republican members of Congress have introduced competing bills stripping Planned Parenthood of funds it gets for family planning and sexual health services that do not include abortion. The only innovation on this front from last year's measures -- which nearly shut down Congress -- is that they were introduced by two women, Diane Black and Marsha Blackburn, because the man who introduced such measures last year is out of Congress. Meanwhile, numerous lawsuits against the contraceptive coverage brought by conservative institutions are still moving through court. As Planned Parenthood president Cecile Richards told the Huffington Post, "They apparently learned nothing from the results of the last election, when Americans said overwhelmingly that they do not want politicians dictating women’s access to health care."

Most of the action is still in the states, as it has been for the past few years, given a pro-choice president and Senate and the fact that so many federal judges are inclined to let Roe-chipping restrictions stand. The Virginia Legislature is again roiled by a series of abortion-related bills. In Texas, Rick Perry remains on the warpath against Planned Parenthood, with low-income women's healthcare hanging in the balance. In Mississippi, the governor who couldn't get Personhood passed is now praising the same "Heartbeat Bill" (which would ban abortion at the detection of a fetal heartbeat -- before many women even know they're pregnant) that Ohio scuttled last year, and the state's sole clinic is fighting to stay open. State legislatures have barely gotten underway, but the Guttmacher Institute's Elizabeth Nash told RH Reality Check, "It still looks like we will see the same issues that were in play in 2012 such as 20-week bans, restrictions on medication abortion, clinic regulations and abortion coverage restrictions, along with counseling, waiting periods and ultrasound provisions."

Why the repetitive loop? Well, national elections aside, Republicans still have a pretty similar coalition as they did last year, including narrowly drawn districts of social conservatives who haven't changed their positions on sexuality and reproductive rights just because commentators declared them out of vogue. Many of these restrictions are being couched as sensible curbs on an "abortion regime" allegedly gone wild, rather than outright bans, and antiabortion activists have been clear that they'll try to bring the debate back to more-graphic depictions of more-developed fetuses.

In other words, last year's election results are no reason for people who support access to abortion and birth control to rest on their laurels. Time for another round.