Alisa Valdes' book "Feminist and the Cowboy" is about a man who taught her to "submit." Now she says he abused her 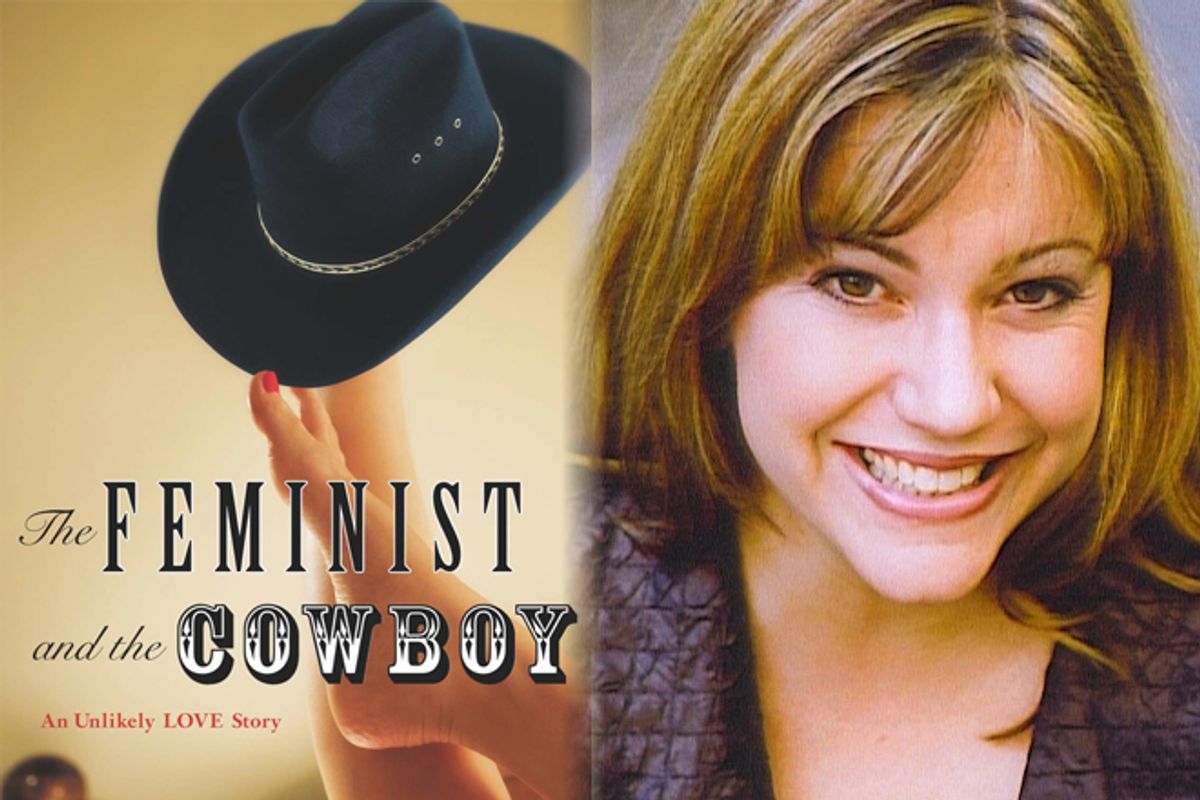 It's a romance-memoir about a hardcore feminist who falls in love with a cowboy who teaches her to reconnect with her "femininity" — and to never talk back, open her own car door or walk on the street side of the sidewalk. The book, which features a cover image of a woman's bare legs tossed high with a cowboy hat perched atop one foot, has been heavily marketed to the anti-feminist crowd, even earning a plug from Christina Hoff Sommers, who called it a "riveting tale about how a brilliant, strong-minded woman liberated herself from a dreary, male-bashing, reality-denying feminism."

But now the author, Alisa Valdes, a prolific romance novelist, alleges that the man who taught her to "submit," and to enjoy it, turned out — after she wrote this love letter of a book about him — to be an abuser.

Yesterday, Valdes published a blog post claiming that after she turned in the manuscript for "The Feminist and the Cowboy: An Unlikely Love Story," said cowboy became emotionally and physically abusive, and during one fight "simply dragged me down the hall to the bedroom, bent me over, and took me, telling me as he did so that I must never forget who was in charge."

Come this morning, the post was gone. In an email, Valdes tells me that, although she doesn't dispute the truth of what she originally wrote in the post, she removed it at the request of her publisher. (Update: Valdes now says the request came from her agent.) Speaking of her publisher, in the blog post in question, a cached version of which is still searchable online, she claims that her publisher has "essentially shunned" her as a result of the inconvenient real-world demise of her written fairy tale and writes, "I am deeply wounded by the stonewalling from my editor, as wounded as I ever was when the cowboy did it to me." (I have yet to get a response from her publicist at Gotham Books to an email request for comment.)

The deleted blog post is an excruciatingly painful read. It tells of an unplanned pregnancy that causes the cowboy to leave her, a miscarriage and then a reconciliation. What follows are several scenes of brutal violence, including one in which she allegedly jumps from the cowboy's moving truck because she's afraid he will kill her ("he'd hinted at it"). Valdes writes:

I landed facedown on a bunch of rocks, nearly crushed under the back tires, dislocating my shoulder, badly cut and bruised everywhere, my hip filling with blood. I screamed. He stopped the truck, walked over, looked at me on the ground as I begged him to call an ambulance. “Only you would be stupid enough to jump out of a moving truck,” he told me. He did not help me, or come near me. Instead, he said he was going to the hunting lodge to get some witnesses, in case I tried to tell the police he had done this to me.

Then she says she ran for the hills and hid in the bushes before walking 16 miles back to her own car. Valdes says she's never seen him again. "[W]hile I set out to write a memoir that was a love letter to a man I was deeply in love with, a man who challenged me in myriad ways, a man who changed my life profoundly, a man I respected and honored greatly at the time, what I actually wrote was a handbook for women on how to fall in love with a manipulative, controlling, abusive narcissist," she writes. And now Valdes says she's trying to set the record straight about a memoir that has been roundly criticized in the past week, with some reviewers explicitly suggesting that the relationship sounds abusive.

In an email, she tells me, "The relationship with the cowboy was rocky for most of 2012, with moments of great beauty and talk of marriage, to moments of tremendous and painful conflict." She describes it as "on-again, off-again," but it finally ended in September of last year. "I do think the relationship continued longer than it should have in part because I wanted to make it at least to the publication date," she explains. "I eventually had to recognize that this was not a good reason to force something that didn't work."

It's not that she's entirely changed her mind, though. She considers herself a "Difference Feminist" (i.e., she sees men and women as having equal worth but as "not being necessarily the same or having the same abilities in all things"), and maintains that the cowboy helped her "to embrace my own female-ness in a way I had been trained to subsume." She ended the email with a nod to her alleged abuser, "As the cowboy often said, there is the way things are, and there is the way we would like for things to be," she tells me. "The only one that matters, ultimately, is how things are. We might not like it, and it might not be fair, but that doesn't make any of it less true." She has a new boyfriend now and, she says, he "wrote the cowboy a thank you note, for having 'tamed' me and made me a better woman, which I totally agree with."