Amid a groundswell of support for the Al-Khawaja family to win the Nobel Prize, daughter Maryam ends her exile 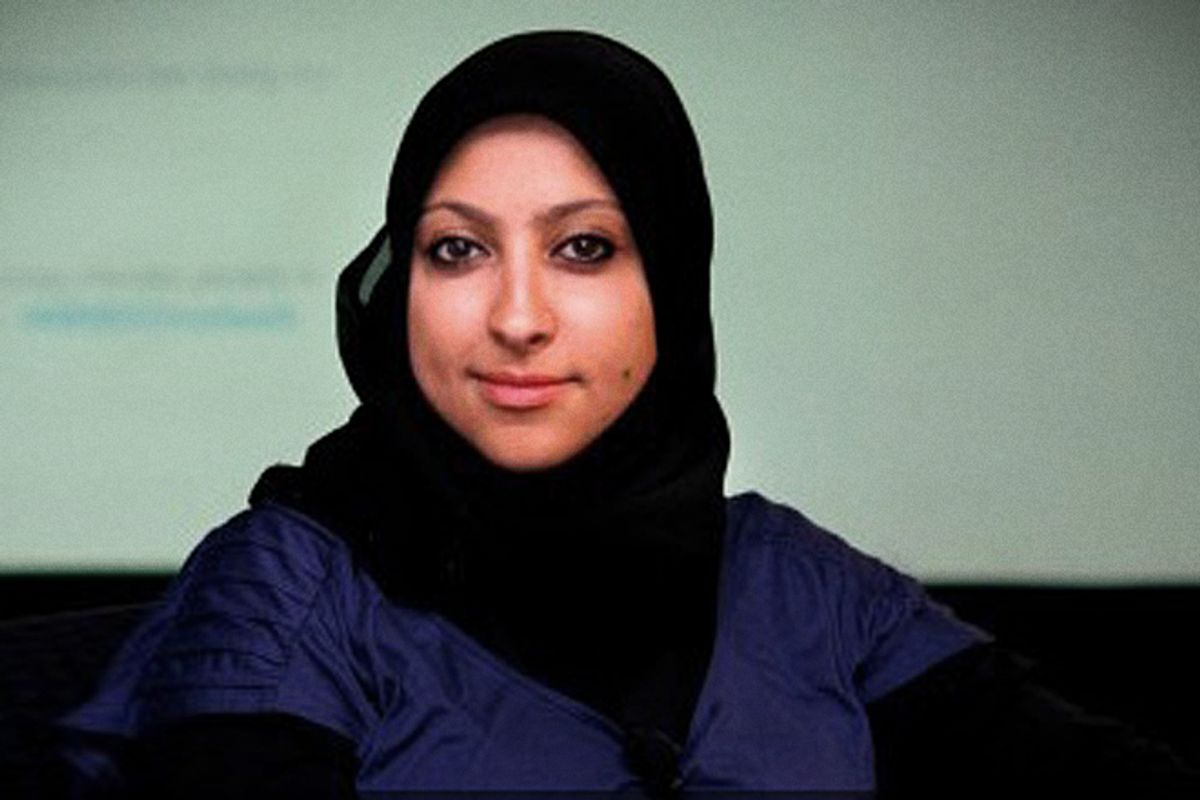 The remarkable Al-Khawaja family continue to bedevil the dictatorial royal regime of Bahrain in ever more confounding ways.

On Thursday I reported on a growing worldwide groundswell of support behind the notion of the entire family’s being considered for this coming year’s Nobel Peace Prize. I described, among other things, the 52-year-old father Abdulhadi’s longtime commitment to nonviolent resistance in support of democratic civil society and against the profoundly repressive regime of the Al Khalafa royal family (local allies, alas, of the United States, which stations its Fifth Fleet there in Bahrain).  I described his brutal arrest following the suppression (largely by the neighboring Saudi army) of the short-lived Pearl Revolution in early 2011; the farcical trial that ensued with its apparently predetermined life sentence; the repudiation of that trial (and others like it) by the regime’s own hand-selected International Commission; the refusal of the regime to recognize its own commission’s recommendations in that regard; the 110-day hunger strike that Abdulhadi launched in early 2012 (Feb. 8 through May 29) in response to the regime’s failure to honor those recommendations; his eventual suspension of the hunger strike amid regime assertions that the their own judiciary would be embarking on a good-faith review of all those sentences; and the final court’s blithe verdict earlier this week, reconfirming Abdulhadi’s ridiculous life sentence, and those of all his colleagues in the civil society movement.

I also described the ongoing brave activism of other members of Abdulhadi’s family — his wife, two sons-in-law, and especially his two daughters, 29-year-old Zainab (mother of a toddler) in country (who has been arrested no less than seven times in the past two years for undertaking demonstrations both alone by herself and at the head of peaceful throngs, as a result enduring countless months in prison herself); and 25-year-old Maryam on the outside, where, taking advantage of her Danish citizenship (attained back in the '90s when the family had attained political asylum in the country), she has been tirelessly advocating on behalf of her father and the cause of Bahraini and more generally Gulf democracy in her role as the acting president of the Bahrain Center for Human Rights (BCHR).

Well, no sooner had we closed the piece Thursday  than we received the following press release from the BCHR:

The primary purpose of Maryam Al-Khawaja’s trip to Bahrain will be to visit her father and uncle in prison as well as to see family members. Additionally, she will be observing the human rights situation on the ground as her colleagues Nabeel Rajab and Sayed Yousif AlMuhafdhah remain in prison.

She will arrive in Bahrain at 8pm Bahrain time on Friday and will be staying there for approximately two weeks. Al-Khawaja will be traveling with her Danish passport, getting a visa at the Bahraini airport, due to the expiration of her Bahraini passport.

Maryam Al-Khawaja had previously chosen to remain in self-imposed exile due to the necessity of being abroad for her work and for safety and security reasons. While the same security and safety concerns are still valid, Al-Khawaja found it necessary to conduct this trip for the reasons mentioned above.

Maryam’s decision to return was particularly brazen, given the regime’s repeated denunciations of her activism abroad — and it definitely put hard-liners in the country in a bind: Should they just allow the return (given the activist’s remarkable effectiveness and the further attention her return could bring to her family’s cause), or should they stop her at the airport, refusing admittance to the country (thereby only adding to her stature and fanning the flames of the international campaign on the family’s and its movement’s behalf)?

In the event, we all sat glued to Twitter as the time of her scheduled arrival a few hours ago approached.  Remarkable, incidentally, the way social media once again is serving to breach authoritarian control of the media, as her supporters monitored events there at the Manama airport minute by minute:

Maryam Alkhawaja is off the plane and will now head to Passport Control.

Maryam Alkhawaja sees female police agent as she gets off the plane.

Maryam Alkhawaja is third in line

Maryam Alkhawaja is now next in line.

Maryam Alkhawaja is now processing her Bahraini visa entry forms as she will be entering the country with her Danish passport.

And then, from her sister Zainab’s own twitter feed:

Following which there was a sudden flood of photographs of the two sisters embracing and flashing the peace sign: It will be heartening, in the days ahead, to imagine the coming reunion, however brief, of the imprisoned father with this daughter who has so effectively been keeping his case alive abroad.  And it will be entertaining, to say the least, to observe the regime’s discomfiture as the Al-Khawajas mount their latest challenge to its authority. A Bahraini human rights activist who asked not to be named just told the BBC he was fearful that Maryam could find herself serving a lengthy jail term. "She could be charged over her tweets against the king and serve five years under a new law that was passed in December," he said.  But would the regime dare arrest her?  And if it did, would such an act have any other effect than simply to add to the luster of the Al-Khawaja family’s brightening authority?