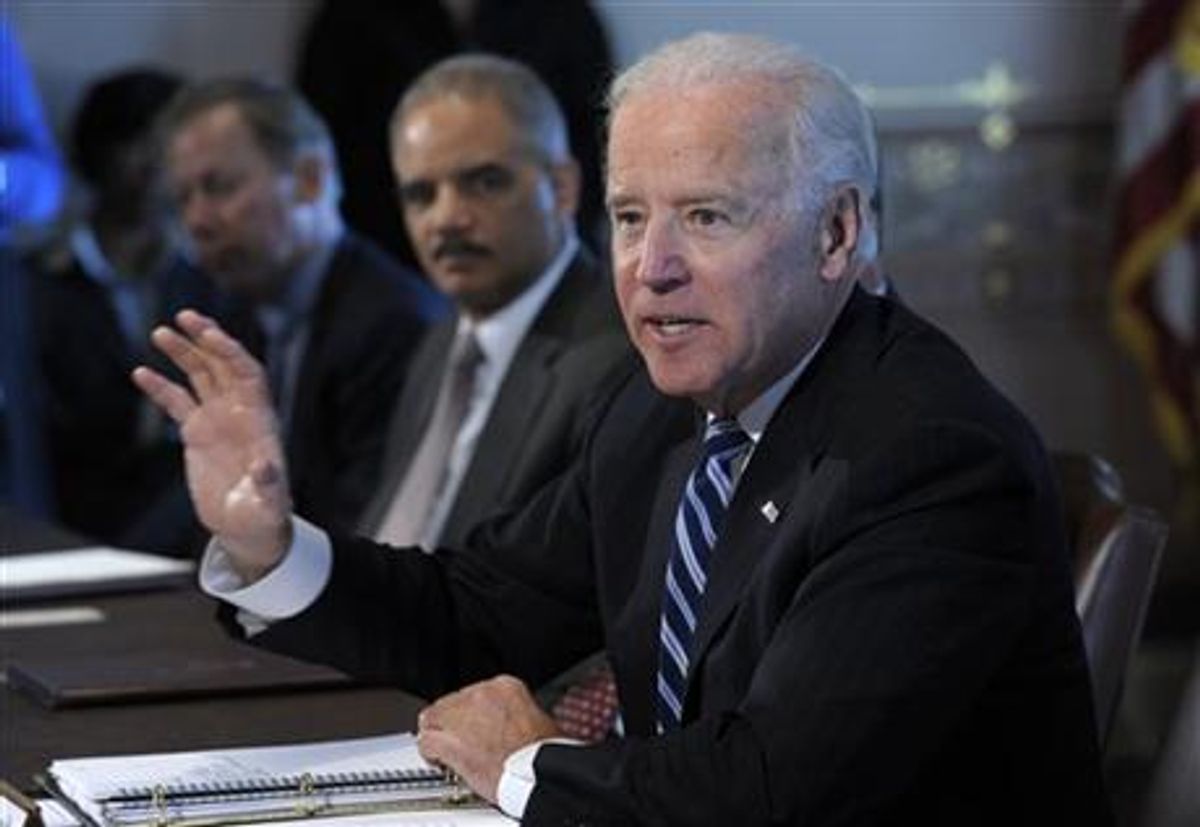 WASHINGTON (AP) — The video game industry, blamed by some for fostering a culture of violence, defended its practices Friday at a White House meeting exploring how to prevent horrific shootings like the recent Connecticut elementary school massacre.

Vice President Joe Biden, wrapping up three days of wide-ranging talks on gun violence prevention, said the meeting was an effort to understand whether the U.S. was undergoing a "coarsening of our culture."

"I come to this meeting with no judgment. You all know the judgments other people have made," Biden said at the opening of a two-hour discussion. "We're looking for help."

The gaming industry says that violent crime, particularly among the young, has fallen since the early 1990s while video games have increased in popularity.

There are conflicting studies on the impact of video games and other screen violence. Some conclude that video games can desensitize people to real-world violence or temporarily quiet part of the brain that governs impulse control. Other studies have concluded there is no lasting effect.

Biden is expected to suggest ways to address violence in video games, movies and on television when he sends President Barack Obama a package of recommendations for curbing gun violence Tuesday. The proposals are expected to include calls for universal background checks and bans on assault weapons and high-capacity ammunition magazines.

Gun-safety activists were coalescing around expanded background checks as a key goal for the vice president's task force. Some advocates said it may be more politically realistic — and even more effective as policy — than reinstating a ban on assault weapons.

The Brady Campaign to Prevent Gun Violence said some 40 percent of gun sales happen with no background checks, such as at gun shows and by private sellers over the Internet or through classified ads.

"Our top policy priority is closing the massive hole in the background check system," the group said.

While not backing off support for an assault weapons ban, some advocates said there could be broader political support for increasing background checks, in part because that could actually increase business for retailers and licensed gun dealers who have access to the federal background check system.

"The truth is that an assault weapons ban is a very important part of the solution — and it is also much tougher to pass," said Mark Glaze, director of Mayors Against Illegal Guns.

Restrictions on high-capacity ammunition magazines are also seen by some as an easier lift politically than banning assault weapons.

The National Rifle Association adamantly opposes universal background checks, as well as bans on assault weapons and high-capacity magazines — all measures that would require congressional approval. The NRA and other pro-gun groups contend that a culture that glamorizes violence bears more responsibility for mass shootings than access to a wide range of weapons and ammunition.

In a 2009 report, the American Academy of Pediatrics declared, "The evidence is now clear and convincing: Media violence is one of the causal factors of real-life violence and aggression."

The report focused on all types of media violence. But for video games in particular, the pediatricians cited studies that found high exposure to violent ones increased physical aggression at least in the short term, and warned that they allow people to rehearse violent acts. On the other hand, it said friendly video games could promote good behavior.

A wide spectrum of the video game industry was represented at the meeting with the vice president, including the makers of violent war video games like "Call of Duty" and "Medal of Honor" and a representative from the Entertainment Software Ratings Board, which sets age ratings that on every video game package released in the United States.

The vice president met Thursday with representatives from the entertainment industry, including Motion Picture Association of America and the National Cable & Telecommunications Association. In a joint statement after the meeting, a half-dozen said they "look forward to doing our part to seek meaningful solutions" but offered no specifics.

Biden, hinting at other possible recommendations to the president, said he is interested in technology that would keep a gun from being fired by anyone other than the person who bought it. He said such technology may have curtailed what happened last month in Connecticut, where the shooter used guns purchased by his mother.

The vice president has also discussed making gun trafficking a felony, a step Obama can take through executive action. And he is expected to make recommendations for improving mental health care and school safety.

"We know this is a complex problem," Biden said. "We know there's no single answer."

The president plans to push for the new measures in his State of the Union address, scheduled for Feb. 12.