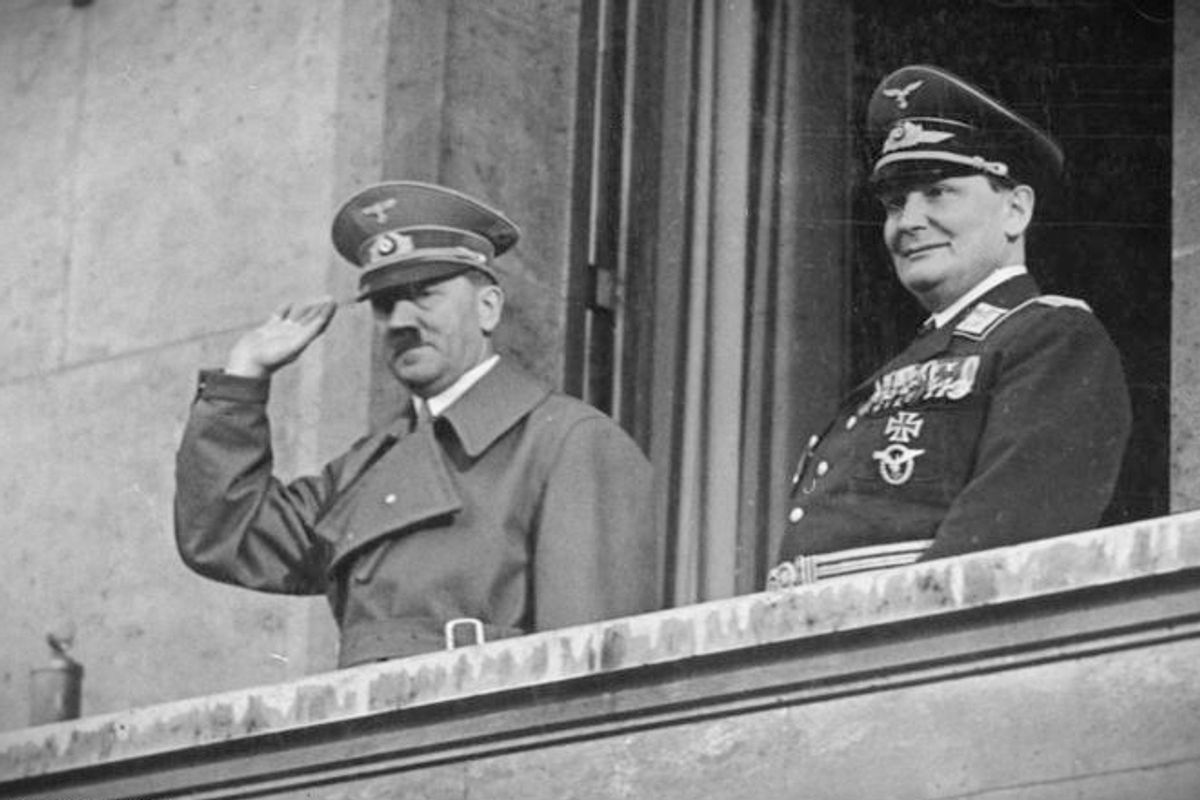 This week, people were shocked when the Drudge Report posted a giant picture of Hitler over a headline speculating that the White House will proceed with executive orders to limit access to firearms. The proposed orders are exceedingly tame, but Drudge’s reaction is actually a common conservative response to any invocation of gun control.

The NRA, Fox News, Fox News (again), Alex Jones, email chains, Joe “the Plumber” Wurzelbacher, Gun Owners of America, etc., all agree that gun control was critical to Hitler’s rise to power. Jews for the Preservation of Firearms Ownership ("America's most aggressive defender of firearms ownership") is built almost exclusively around this notion, popularizing posters of Hitler giving the Nazi salute next to the text: “All in favor of ‘gun control’ raise your right hand.”

In his 1994 book, NRA head Wayne LaPierre dwelled on the Hitler meme at length, writing: “In Germany, Jewish extermination began with the Nazi Weapon Law of 1938, signed by Adolf Hitler.”

And it makes a certain amount of intuitive sense: If you’re going to impose a brutal authoritarian regime on your populace, better to disarm them first so they can’t fight back.

Unfortunately for LaPierre et al., the notion that Hitler confiscated everyone’s guns is mostly bogus. And the ancillary claim that Jews could have stopped the Holocaust with more guns doesn't make any sense at all if you think about it for more than a minute.

University of Chicago law professor Bernard Harcourt explored this myth in depth in a 2004 article published in the Fordham Law Review. As it turns out, the Weimar Republic, the German government that immediately preceded Hitler’s, actually had tougher gun laws than the Nazi regime. After its defeat in World War I, and agreeing to the harsh surrender terms laid out in the Treaty of Versailles, the German legislature in 1919 passed a law that effectively banned all private firearm possession, leading the government to confiscate guns already in circulation. In 1928, the Reichstag relaxed the regulation a bit, but put in place a strict registration regime that required citizens to acquire separate permits to own guns, sell them or carry them.

The 1938 law signed by Hitler that LaPierre mentions in his book basically does the opposite of what he says it did. "The 1938 revisions completely deregulated the acquisition and transfer of rifles and shotguns, as well as ammunition,” Harcourt wrote. Meanwhile, many more categories of people, including Nazi party members, were exempted from gun ownership regulations altogether, while the legal age of purchase was lowered from 20 to 18, and permit lengths were extended from one year to three years.

The law did prohibit Jews and other persecuted classes from owning guns, but this should not be an indictment of gun control in general. Does the fact that Nazis forced Jews into horrendous ghettos indict urban planning? Should we eliminate all police officers because the Nazis used police officers to oppress and kill the Jews? What about public works -- Hitler loved public works projects? Of course not. These are merely implements that can be used for good or ill, much as gun advocates like to argue about guns themselves. If guns don't kill people, then neither does gun control cause genocide (genocidal regimes cause genocide).

Besides, Omer Bartov, a historian at Brown University who studies the Third Reich, notes that the Jews probably wouldn’t have had much success fighting back. “Just imagine the Jews of Germany exercising the right to bear arms and fighting the SA, SS and the Wehrmacht. The [Russian] Red Army lost 7 million men fighting the Wehrmacht, despite its tanks and planes and artillery. The Jews with pistols and shotguns would have done better?” he told Salon.

Proponents of the theory sometimes point to the 1943 Warsaw Ghetto Uprising as evidence that, as Fox News’ Judge Andrew Napolitano put it, “those able to hold onto their arms and their basic right to self-defense were much more successful in resisting the Nazi genocide.” But as the Tablet’s Michael Moynihan points out, Napolitano’s history (curiously based on a citation of work by French Holocaust denier Robert Faurisson) is a bit off. In reality, only about 20 Germans were killed, while some 13,000 Jews were massacred. The remaining 50,000 who survived were promptly sent off to concentration camps.

Robert Spitzer, a political scientist who studies gun politics and chairs the political science department at SUNY Cortland, told Mother Jones’ Gavin Aronsen that the prohibition on Jewish gun ownership was merely a symptom, not the problem itself. "[It] wasn't the defining moment that marked the beginning of the end for Jewish people in Germany. It was because they were persecuted, were deprived of all of their rights, and they were a minority group,” he explained.

Meanwhile, much of the Hitler myth is based on an infamous quote falsely attributed to the Fuhrer, which extols the virtue of gun control:

This year will go down in history! For the first time, a civilized nation has full gun registration! Our streets will be safer, our police more efficient, and the world will follow our lead into the future!

The quote has been widely reproduced in blog posts and opinion columns about gun control, but it’s “probably a fraud and was likely never uttered,” according to Harcourt. “This quotation, often seen without any date or citation at all, suffers from several credibility problems, the most significant of which is that the date often given [1935] has no correlation with any legislative effort by the Nazis for gun registration, nor would there have been any need for the Nazis to pass such a law, since gun registration laws passed by the Weimar government were already in effect,” researchers at the useful website GunCite note.

“As for Stalin,” Bartov continued, “the very idea of either gun control or the freedom to bear arms would have been absurd to him. His regime used violence on a vast scale, provided arms to thugs of all descriptions, and stripped not guns but any human image from those it declared to be its enemies. And then, when it needed them, as in WWII, it took millions of men out of the Gulags, trained and armed them and sent them to fight Hitler, only to send back the few survivors into the camps if they uttered any criticism of the regime.”

Bartov added that this misreading of history is not only intellectually dishonest, but also dangerous.  “I happen to have been a combat soldier and officer in the Israeli Defense Forces and I know what these assault rifles can do,” he said in an email.

He continued: "Their assertion that they need these guns to protect themselves from the government -- as supposedly the Jews would have done against the Hitler regime -- means not only that they are innocent of any knowledge and understanding of the past, but also that they are consciously or not imbued with the type of fascist or Bolshevik thinking that they can turn against a democratically elected government, indeed turn their guns on it, just because they don't like its policies, its ideology, or the color, race and origin of its leaders.”