Time has changed David Bowie: He can trace time

The icon's first song in a decade reflects on his prolific, multifaceted career — and confronts his mortality 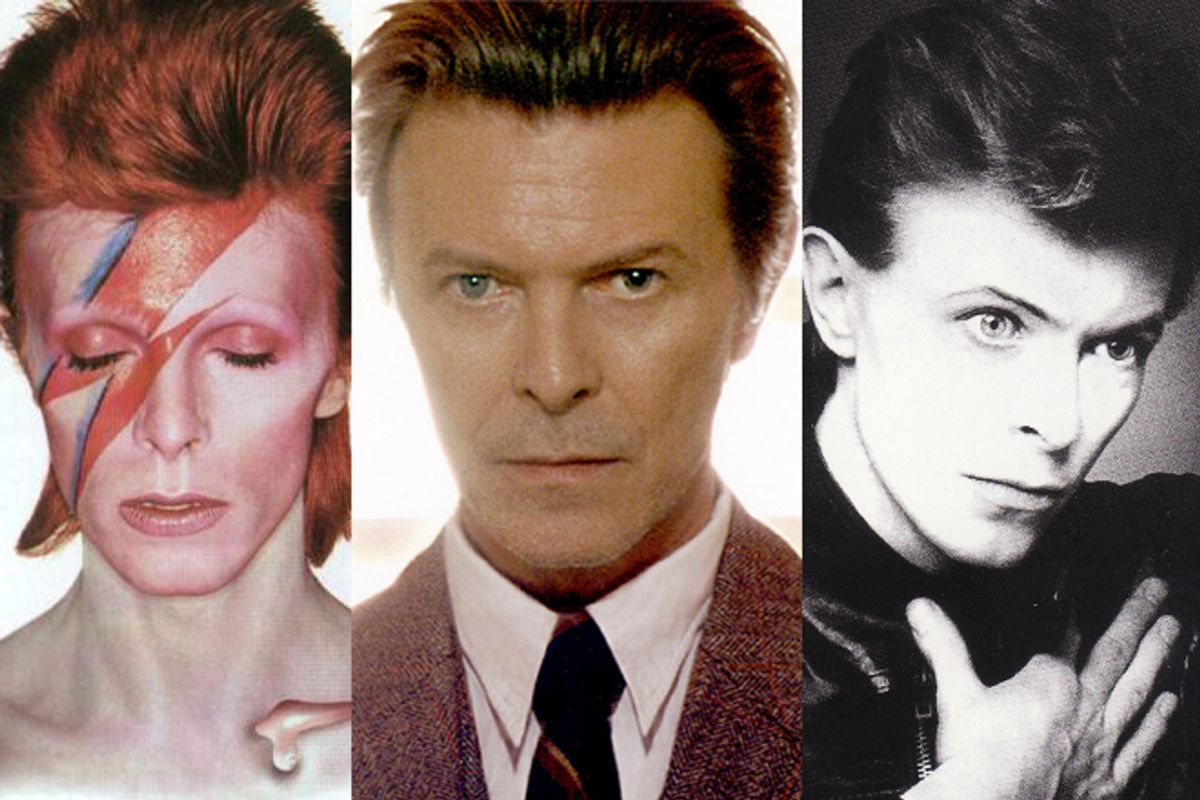 "Time may change me/ But I can't trace time," sang David Bowie in the closing lines of one of his most famous songs, "Changes." But more than 40 years later, tracing time is exactly what he's doing. Earlier this week on his 66th birthday, the man born David Robert Jones released his first new single in nearly 10 years – the elegiac ballad "Where Are We Now?" – and in so doing, confounded expectations with his most surprising stunt in years: He finally looked back.

Bowie being Bowie, it isn't just the (very good) song itself that has people talking. Along with the new track, he also unveiled cover art that was immediately received with skepticism, bemusement and confusion by fans. No, the image was nothing like the emaciated, sexually ambiguous "Diamond Dogs" gatefold, or a return to his neo-fascistic mid-'70s period. It wasn't even akin to the dapper, tweed-zombie from 2002's underrated, "Heathen." Instead, the cover in question shows a repurposed image from "Heroes" with the iconic photo obscured by a blank square with the album title printed in stark sans-serif font:

To complete the effect, the original title is crossed out (but still easily readable). It's an image that recalls both contemporary Internet culture (e.g., the text plastered over cat pictures on the message board Reddit), and a modernist absurdism that Andy Warhol would have appreciated. While this combination of flippancy and nostalgia is certainly worth discussing, there's something deeper, darker and, perhaps, sadder behind the pieces.

And then there's the bizarre video that accompanies the track. With images of Berlin that play like a badly edited Hi8 home movie, and a balloon-faced Bowie sitting next to a spooky woman (video director Tony Oursler's wife, painter Jacqueline Humphries), the effect is somewhere between a Terry Gilliam film and public access television. Were it any other artist, we might think he had created these as an afterthought or gag ("That will turn up in the top 10 worst album covers of all time lists," said a commenter on the Guardian), but with Bowie, aesthetic is never tossed off. If he were to be chasing hip rather than defining it, that would surely be heartbreaking, but to interpret "The Next Day" in such a way would be a mistake.

After the initial response, Jonathan Barnbrook, the artist behind the album art, felt the need to explain himself on his website: "The 'Heroes' cover obscured by the white square is about the spirit of great pop or rock music which is 'of the moment,' forgetting or obliterating the past." When paired with a song like "Where Are We Now?," though, that blank square seems like it's as much about remember the past as destroying it. For an artist who created and defined the new more than anyone, the coolest thing he could is the exact opposite.

From the beginning of his career, Bowie has always been equal parts provocateur and musician. His most famous phases  – glam rock ("Space Oddity," "Hunky Dory"), Ziggy Stardust ("The Rise and Fall of Ziggy Stardust and the Spiders From Mars"), the Thin White Duke ("Station to Station," "The Man Who Fell to Earth"), and the Berlin era ("Low," "Heroes," "Lodger") — have all been about embodiments of characters.  On a televised interview from 1974 when he was headlong into his Thin White Duke period (and the mountains of cocaine that went with it), Dick Cavett hit the nail on the nose, "To me you seem like a working actor," he said.  The snuffly but charmingly shy guest agreed: "I'm not really an academic but I [flit] from one thing to another a lot."

"Where Are We Now?" feels particularly weighty, though, precisely because Bowie isn't playing a character this time around. "Sitting in the dschungel/ On Nuernberger Strasse/ A man lost in time/ Near KaDeWe," he sings, returning to the streets of East Berlin that defined the best albums of his career. (The track is produced by frequent collaborator Tony Visconti, who also worked on "Heroes.") Is Bowie heartbroken to return to the city he once gained inspiration from, only to see it changed? Perhaps he's preparing for a final goodbye.

Seeing Bowie as an introspective old man is even more shocking when we look at his contemporaries, particularly the Rolling Stones. As Bowie reveals himself nakedly to the public for the first time, Jagger, Richards & Co. continue playing stadium after stadium with the same catalog they've recycled for more than three decades. This isn't to say that the Stones still can't bring it live, but they also serve as poster children for a boomer generation that refuses to grapple with the age of their idols, while mythologizing themselves into oblivion. A better analog for "The Next Day" may be Paul Simon, whose 2011 album "So Beautiful or So What" (released four months before Simon's 70th birthday) spent time grappling with mortality and the trappings of age. Even so, Bowie's outward exploration and specific reference to his past work is fairly unprecedented.

It's probably best to look at "Where Are We Now?" allegorically. The tone is unmistakably funereal, and Bowie sings with a rough voice far removed from the ropey tenor he used in his prime. Instead, the croaking, quavering baritone suggests someone who has seen all he needs to. "Just walking the dead," he repeats throughout the song, as if that's all there is to do.

Last year, psyche-pop band the Flaming Lips – themselves notorious provocateurs – made headlines with a new track titled "Is David Bowie Dying?" While I'm not suggesting that he is, rumors about his health have been dogging him on both sides of the Atlantic for the past decade. In 2004, Bowie had a heart attack while performing in Germany, and had an angioplasty, and what few public appearances he had scheduled in past years have been canceled. During that same tour, Bowie suffered a bizarre injury when he was struck in the eye by a far-flung lollipop  – an incident that feels so undignified, no one would have blamed him for hanging it up right then.

Then there's the question of whether we even want to hear artists revisit their former, better selves. With the Stones, Bob Dylan and the Who (or what remains of them), our culture seems to have an insatiable desire for reliving the past. We've heard it all before, but still want to hear it again. How many times can a former Beatle cover Rolling Stone magazine while plugging some lackluster solo project that will be forgotten in a few months (or worse, remembered as a complete disaster, like the recent McCartney/Nirvana chimera). Bowie, on the other hand, has shown little of himself, and refused to capitalize on the nostalgia-for-cash machine. He's the rare pop star who gives off the impression that he never sold out (even when he did, if briefly, in the '80s, when he decidedly became more commercial with huge hit albums like "Let's Dance" and "Tonight").

For a man who has been defined by his mercurial persona, it's fascinating to see that this latest (and possibly last) left turn is not some radical new evolution. Until now, at least, his many masks were still securely attached, while a half-century of hipsters desperately wanted to peek behind them. Everyone has a favorite Bowie persona or era, and they all want to know more about his creator. "Where Are We Now?," even with its quirky presentation, gives us a slightly more intimate behind the scenes. There's another line that hangs in the air, surrounded by spindly guitar, that may be the most heartbreaking of all. "The moment you know, you know, you know," he says. What has Bowie learned about himself? What is he telling us? There are still riddles, but they are intimate little ones, without pomp or circumstance. When "Heroes" was released in 1977, it was already Bowie's 12th record, a number that sounded prolific even then. This March, when "The Next Day" goes on sale, it will be his 24th. For the lifelong futurist, remembering the past is its own quiet revolution.

Nathan Reese is a contributing music editor at Refinery29, and writes regularly for Interview Magazine, AdHoc.fm, among other publications. Follow him on Twitter @nathanreese.