Democratic grandmothers spy on their neighbors

Forget knocking on doors. The "Grandma Brigade" in Minnesota gathers public info about other voters 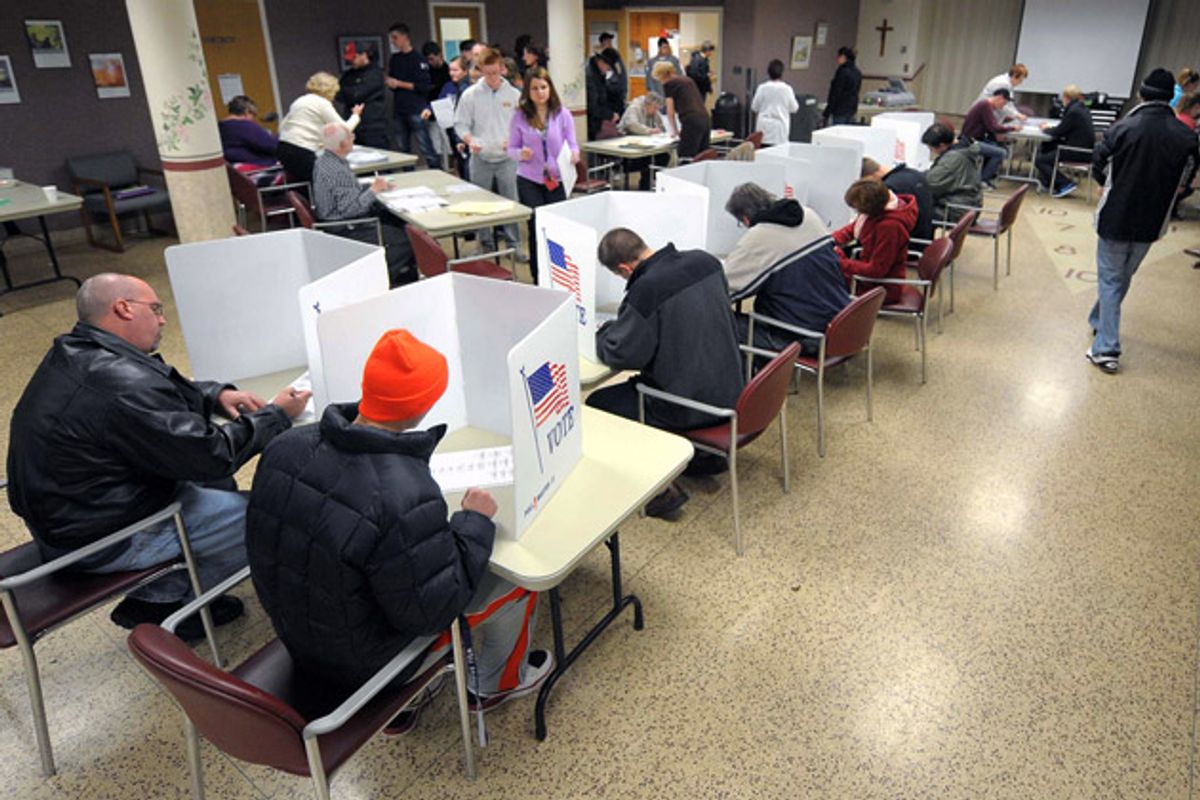 In Minnesota, Democratic volunteers scour their local newspapers each morning for letters to the editor with a political slant. They pay attention to the names of callers on radio shows. They drive through their neighborhoods and jot down the addresses of campaign lawn signs.

Then they feed the information into a state Democratic Party database that includes nearly every voter in Minnesota.

Some of the states' few dozen data volunteers are so devoted that they log into the party database daily from their home computers. Deb Pitzrick, 61, of Eden Prairie, convinced a group of her friends to form the "Grandma Brigade." These women, in their 50s, 60s and 70s, no longer want to knock on doors for the Democrats. Instead, they support the party by gathering public information about other voters.

Much of the data the Grandma Brigade collects is prosaic: records of campaign donations or voters who have recently died. But a few volunteers see free information everywhere. They browse the listings of names on Tea Party websites. They might add a record of what was said around the family Thanksgiving table — Uncle Mitch voted for Bachmann, cousin Alice supports gay marriage.

One data volunteer even joked about holding "rat out your neighbor parties," where friends would be encouraged to add notes about the political views of other people on their block.

Once information about individual people is entered into the state party's database, it doesn't stay in Minnesota. Almost all the information collected by local volunteers like the Grandma Brigade also ends up in the party's central database in Washington.

Few places have data volunteers as dedicated as the ones in Minnesota, which has been held up as a model for other state Democratic parties. Both Democrats and Republicans have centralized databases that, among other things, track opinions you share with local campaign volunteers.

Each piece of information the parties have stored about you might not be too interesting on its own. But taken together, they're incredibly powerful. Political campaigns are using this voter data to predict voters' behavior in increasingly sophisticated ways.

"People say that campaigns are more art than science. They're wrong," said Ken Martin, the chair of Minnesota's Democratic-Farmer-Labor Party.

"We're pretty sure, when we pull you up on a file, which way you're going to vote," he said. "It's a little scary. A little big brother."

Voters themselves have no way to know what data politicians have collected about them, or how campaigns are using or sharing that information. Indeed, the same politicians who are pushing for more transparency about the workings of the commercial data industry — including President Barack Obama — have said nothing about the information that political campaigns collect.

Both political parties treat their data operations as closely guarded secrets and will not even reveal exactly what kinds of information about voters are stored in their databases.

At times, politicians are assembling data that has no obvious application. With technology evolving, this information could be valuable in the future.

"A lot of it you just have to collect in good faith that later there will be some place it will apply," said Sarah Black, the Minnesota DFL voter file manager.

The Grandma Brigade's Pitzrick said she doesn't think the publicly available data that she and other volunteers are collecting raises privacy concerns.

"Is it any different than having Best Buy have it for you?" she asked. "It's out there."

Political parties can use the data they collect to look at how individual voters' opinions and loyalties change over time.

In Virginia, a typical profile in the Democratic Party's database includes notes from the dozens of times campaigns have contacted a given voter since 2001, including which candidates the voter has supported over the years, and whether they were Democrats or Republicans, according to Brenner Tobe, the party's director of information and technology.

By the 2016 presidential race, Virginia Democrats will have recorded 15 years' worth of interactions with some voters.

Minnesota's data goes back even further, thanks to an early investment in a computerized data system in the 1980s.

"The pool of people we don't know something about gets smaller and smaller," Black, the voter file manager, said.

During this past election cycle, Democratic volunteers in Minnesota had one million new conversations with voters, which translated into at least one million new pieces of information about individual voters, Black said.

Democrats in Virginia and Minnesota collect a lot of data out of necessity, since voters in those states do not publicly register with a political party. There's no easy way to tell Democratic voters from Republican voters unless the party saves information about them.

A Democratic data firm showed last summer that the party was able to clearly distinguish supporters from opponents despite having no information about voters' party registration.

The amount of information politicians have about individual voters varies state-by-state. Each state party makes its own data rules, and some local candidates are more willing to share their information than others. Swing states — which see a regular influx of national money and volunteers — tend to have more information than safe states.

Both the Democratic and Republican parties have pushed hard over the last decade to train volunteers to use their party's databases. A decade ago, the Republican National Committee was sending staffers with crates of laptops to Republican events across the country, with the goal of training local activists to use the party's "Voter Vault" database, according to interviews with former RNC staffers. Volunteers were encouraged to bring in their address books, look up their friends in the database, and update their contact information, said Serenety Hanley, who worked on the project.

Much of the coverage of President Obama's big data effort focused on the high-level analysts and number crunchers working out of the campaign's offices in Chicago — and the Republicans advocating for their party to adopt similar data-focused strategies.

But Democratic insiders say that their party's data advantage comes from their strong network of on-the-ground volunteers — something that may be harder to replicate than hiring an office of data scientists.

Pitzrick, the founder of Minnesota's Grandma Brigade, came to political activism in 2003 from a background in marketing, and was shocked at the poor quality of the Democratic Party's information. One local volunteer she knew went to interview a voter on her list, only to find his family holding a wake.

So, Pitzrick started flipping to the newspaper obituary page over her morning cup of coffee, and updating the voter database in her local state senate district. These days, she said, she finds it more efficient to open up local entries on Legacy.com.

One of Pitzrick's friends, 76-year-old Fran Merriman, a former high school American history and government teacher, tracks the public records of voters moving in and out of the area — something that's a lot of fun, she quips, for a "nosy old lady."

"Every time we send out mailers and it comes back, we've wasted 44 cents," Merriman said. Updating the database, she said, is "like contributing money" to the party.

"I'm sure some place across the country there are a lot of other seniors citizens who could do this kind of work," she said.

The Federal Trade Commission recently asked nine large data companies to clarify what commercial data companies do with individuals' information — and whether consumers have the right to opt-out. Earlier this year, several members of Congress asked data companies similar questions.

President Barack Obama himself released a Consumer Privacy Bill of Rights, focused on online data collection, last February, which suggested that consumers "have a right to exercise control over what personal data companies collect from them and how they use it." The president said he would push for legislation to back up consumers' privacy rights.

But the administration has been silent on what if any rights voters should have regarding the data gathered about them.

Asked about this issue last year, a White House spokesperson would only say that the Privacy Bill of Rights "applies to how businesses handle consumers' personal data online, and will impact all organizations using personal information collected through commercial means," including campaigns.

The White House did not respond to a request for comment.