The brutal truth about how childhood determines your economic destiny

The British class system looks frighteningly rigid in "56 Up." But is America any better? 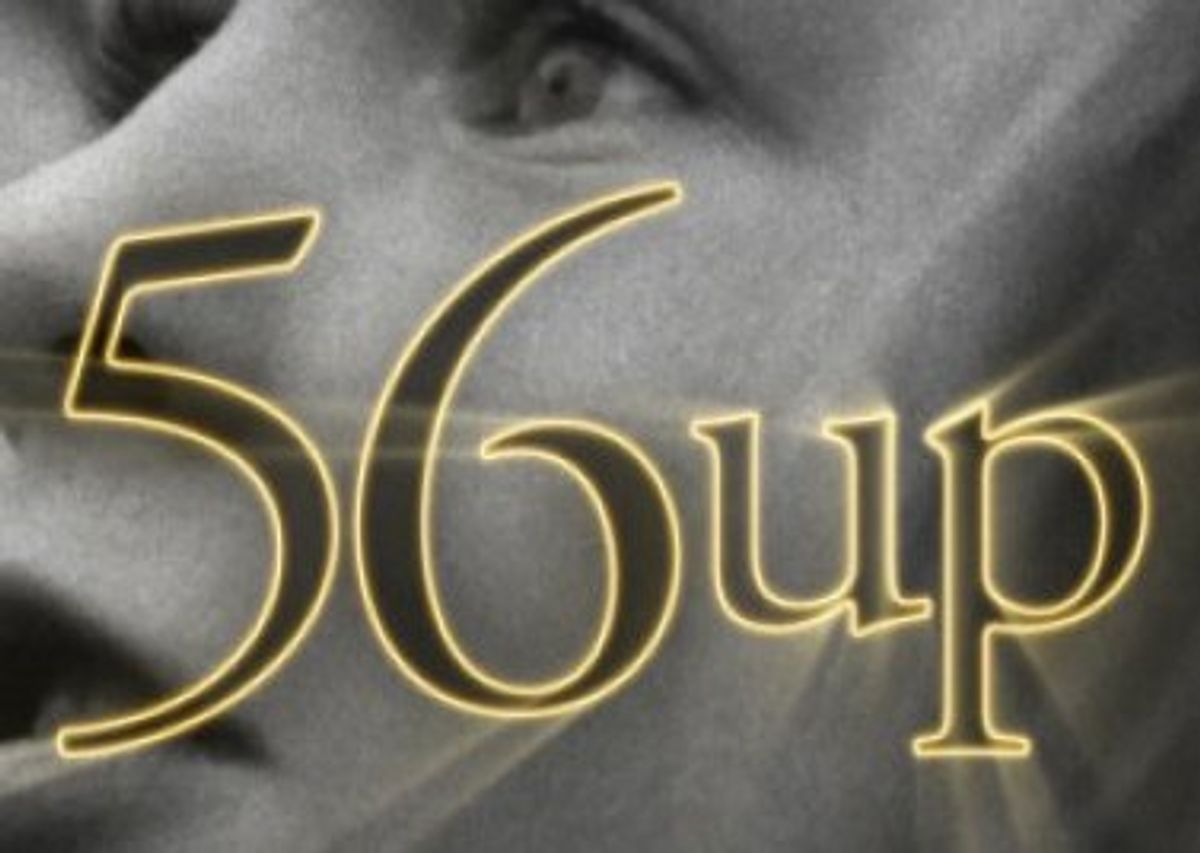 "Give me the child until he is seven," the old Jesuit teachers say, "and I will give you the man."

Back in 1964, filmmaker Paul Almond set out to test that theory by documenting the lives of a group of seven-year-old British children. Some were born to the manor; others grew up in charity homes. There were tykes from both the countryside and the city. Almond wanted to know if the destiny of the children had already been scripted by the circumstances of their birth -- particularly those of class. His film Seven Up! has grown into a series spanning over five decades. Every seven years, like the cycle in some mythological saga, Michael Apted, the assistant on the original project, has returned to these children as they have morphed before our eyes into awkward adolescents, tentative adults, and now, the paunchy survivors of late middle-age.

As bright-eyed children, participants like Jackie Bassett, the product of a working-class neighborhood, or Andrew Brackfield, who attends a posh prep school, are already miles apart in attitude and habits. Tellingly, the children speak very differently about what they see in their future. Those from the higher ranks already know which universities they’ll attend, while Paul Kligarman, who lives at the charity home, asks plaintively, “What’s a university?”

As an American watching the film, you probably have a strong urge to see the youngsters launched on stormy seas overcome their disadvantages. (You may also harbor a sneaking desire to see one or two of the most privileged children, like smug little John Brisby, receive some sort of comeuppance in life.)

It doesn’t go quite like that. When the first film in the series was released in the ‘60s, many believed that postwar affluence had translated into increased mobility and opportunity in Britain. Yet with few exceptions, the Up series shows that the children of cabbies tend to grow up to be cabbies and have children who do much the same. Likewise, the children of barristers grow up to be barristers and bequeath their legacies to future masters of the universe. The truth of the Jesuit adage stares starkly from the screen in the eyes of these real human beings.

Class is a touchy, complicated subject. Is it about money? Education? Tastes? Occupation? Above all, class is about social structure. In the UK the old hierarchical structure based on property in the form of land has stubbornly persisted, reinforced by the banking system. Certainly a variety of factors influence destiny that are not directly connected to that system. We don’t learn much about race in the Up series as just a single participant, one of the charity home boys, is of mixed ethnicity. But we do see that gender wields a mighty influence over fate. The lives of the less wealthy girls appear to be more precarious than those of boys with similar backgrounds. Individual circumstances can twist fate this way or that. The moderately comfortable childhood of Liverpudlian Neil Hughes does not prepare him for the ravages of adult-onset mental illness. Even so, he is able to cling to at least a semblance of middle-class existence as a local politician in Scotland.

Several of the participants in this unique documentary project are visibly uncomfortable with the project's implied commentary on the class system. The less affluent tend to blame themselves for not working hard enough in school to make it to university. John Brisby, speaking for the upper class, attributes his success to personal merit as much as birthright, pointing out the hardship of a parent’s death that caused some financial upheaval for his family. But it’s clear that large socio-economic forces can easily wipe out the individual efforts of the working-class folks. Jackie’s rheumatoid arthritis has crippled her so badly she can hardly button her shirt, and yet the austerity-crazed British government has just reviewed her disability benefits and deemed her able to work. So she relies on the support of her sons to keep food on the table. Her childhood friend Lynn Johnson has lost her job as librarian due to budget cuts, and the pain of falling from security to insecurity burns from her gaze.

The wealthy participants in 56 Up are hardly fazed by the global recession. They live in a world where life is stable and protected from the vicissitudes that can instantly turn a working-class mom who is making it into a pauper who can barely keep the roof over her head. Something is clearly rotten in the Britain. But what of America?

The American Dream is woven with promises of mobility: if you roll up your sleeves and work hard, you can succeed against any odds. A 2009 poll found that even after the body blow of the Great Recession, nearly two-thirds of Americans continued to believe that you can start out poor and still achieve wealth through individual effort. As Americans, we look at figures like Oprah Winfrey, a child of poverty in the rural South, as evidence that anyone can reach the top of the class pyramid with enough hard work and persistence. If she had children, Winfrey could send them to most any posh boarding school in the country. We look at the hierarchies and snobberies that still exist in the UK and consider our system superior.

We feel this way partly because of our history. Our founders made much of having left behind the rigid hierarchies of Europe. Property is certainly a decisive factor in determining class, and in America, a land-based aristocracy only really existed in the South -- and that was pretty well smashed during and after the Civil War. But money is also a form of property, and having access to cash is what determines the hierarchical structure in capitalist systems like the one we find ourselves in today. If you can collect enough money, you can belong to the upper class in America.

But who has a chance to get the cash? Americans are aware of class, but they overestimate mobility, which, according to numerous studies, is going the way of the wooly mammoth. In fact, mobility in America is among the lowest in developed countries – just about on par with the UK. In the "land of opportunity," children from low-income families have only a 1 percent chance of reaching the top 5 percent of the income distribution. Children born in France, Germany, Canada, and the Scandinavian countries have a better chance of moving upward.

America’s children are facing a system that’s hardening with every budget cut and tax exemption for the rich. Forty-two percent of children born to parents in the bottom fifth of the economic distribution are stuck there as adults, while 39 percent of children born at the top remain there. The U.S. Census Bureau found in 2010 that 22 percent of American children were living in poverty, a number that has been steadily rising since the 1980s. The growth of the financial sector and the destruction of New Deal programs pushed by conservatives and now embraced even by many liberals has increased economic equality dramatically. More poor children means more poor adults.

Americans have long believed that economic inequality is OK as long as everybody has a chance to move from one rung of the ladder to the next. But the accelerating rise in inequality hasn’t meant more mobility, but less. What Americans are just beginning to grok is that we are pioneering a system that may be just as inflexible as the old system of landed classes. Our new system is based on access to mobile money, and it is spawning dynasties, creating closed social circles and birthing more devices for social exclusions that separate the well to do from the rest.

When we see the upper-class tykes in the Up series taking rigorous courses and subjected to rigid discipline, the grainy black-and-white film tells us that we are looking into the past. But it’s hard not to think of the children of America’s present elite pushed toward academic success and trained relentlessly for tests that secure entrance into top private schools. As the government recedes into the background, as austerity-minded politicians work to erode public services, hierarchies based on mobile money will further calcify.

Maybe what we need is an Up series focused on the United States. Although for many folks, Down would be a more suitable title.