Do memoirs have to be so unhappy? 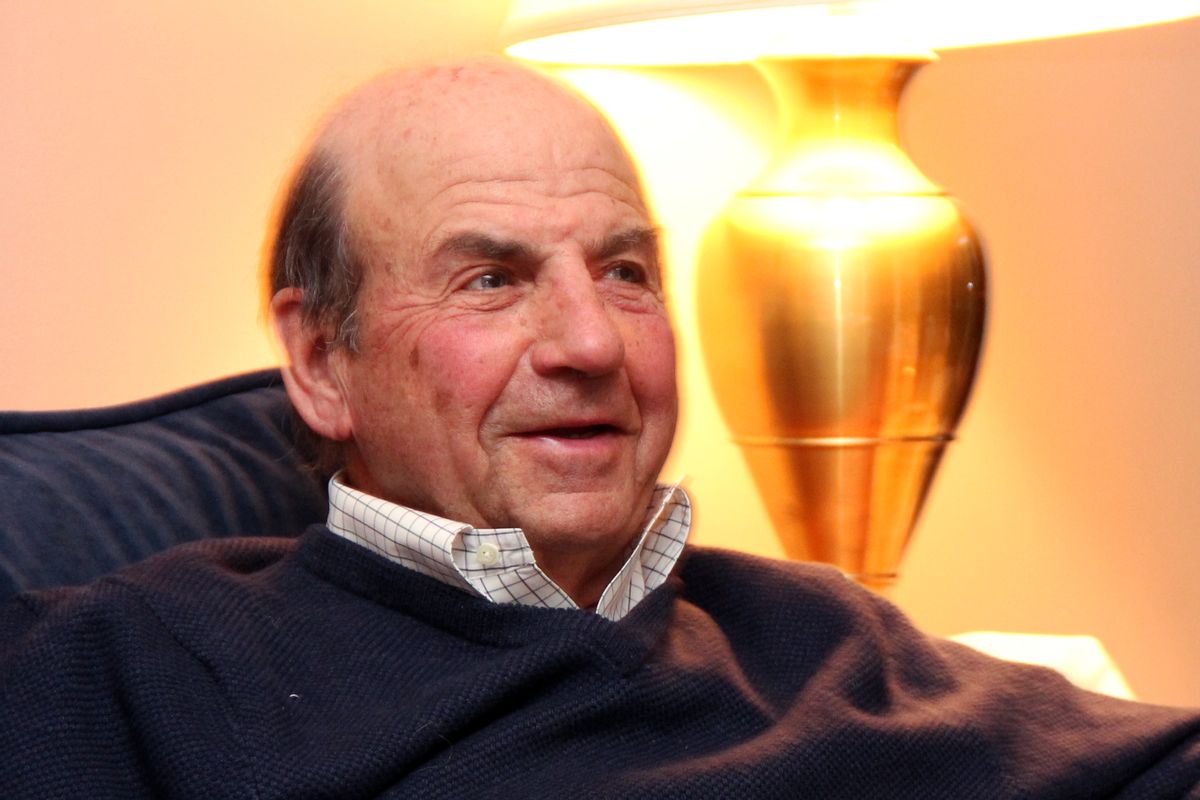 So your first pick is The Liars’ Club by Mary Karr. Why did you choose that to start with?

It’s one of my favourite memoirs. I think she manages to capture the city that she lived in, and its surroundings, beautifully – you can almost smell the oil refineries. I don’t believe she names the city, but it’s in that east Texas, Gulf Coast area where there are a lot of people who work on the rigs. So she captures that, and I felt it was an honest book. I give people a little leeway on memoirs. On regular non-fiction, I have orthodox views (or somewhere between Orthodox and Hasidic probably) – but when it comes to memoirs, I don’t really expect that the sentence that is being quoted from when the person was four years old, you can go to the bank with, but I feel it is their story. And I found hers essentially believable.

I’m not sure that’s true. There’s a book by one of the Mitford sisters, Jessica, calledHons and Rebels. That was written in the 1950s – so it’s a form that’s existed for a long time. What may be different about a lot of the recent memoirs is the writers are not necessarily well known. Mary Karr is a poet and poets in the United States, you don’t even have to say they are not well known because there aren’t any well-known poets. So I think that’s one difference between a memoir and an autobiography – the person doesn’t have to be a household name to write a memoir. Maybe Mary Karr’s book started that – the idea of somebody just having an interesting story.

Your next choice is John Mortimer’s Clinging to the Wreckage.

Oh I love that book! And that’s more than his childhood; he gets up to when he’s working for the BBC. I just thought it was a great example of graceful writing, not just the right words, but also the right number of words. He just picked out things from his life. And I know he wrote about this in several places, but I believe that was the first portrait of his father. I read it years ago, but the picture of his father is still in my mind.

Wasn’t he a bit of a rogue?

His father was a blind matrimonial lawyer.

I knew Mortimer slightly, I rather enjoyed him! I heard him speak once and I thought he was an enormously gifted speaker. He had a good memory of his childhood and he talked about leaving prep school. And the headmaster had all the leavers, the people who were ready to go out into the world at age 12 or 13, into his study at the end and said to them all: “You’ll have dreams! You’ll have dreams and you’ll wake up and say, ‘You rotter!’” I loved that. Mortimer was a very witty writer and I like almost everything he wrote.

And when you say it’s the right length, you mean it’s short?

Yes. He doesn’t tell you a lot of things. That’s one of the differences between memoirs and autobiography and particularly biography. Most memoirs are short, while recent biographers have felt that they have to take up the whole road so there’s no room for anybody else. So they write these biographies that are 600-800 pages long. I don’t know of anyone whose life is that interesting in detail. Then he got into fourth grade and so on. I find these huge doorstops just impossible. Picking out a few themes and writing about them is what I prefer to read.

As I say, I still have the picture of the father in my mind and I still remember the great title. The guy who told him in a bar that he had survived years of sailing by taking to heart the advice that if the boat ever overturned, what you should do is cling to the wreckage rather than swim to shore…

Your next choice is by the long-time New York Timescolumnist Russell Baker.

Yes, I thought Growing Up was a model memoir. I know he was sort of stuck on it for a while, and then he found these letters that his mother had exchanged during the Depression. And there was a lot of reporting in that book. I think if you take somebody like Baker, who has spent his life mainly as a reporter, he has a different approach to memoir, than someone who has spent her life, say, as a poet. In the first place, he is much more concerned with, “Hey, did that really happen or am I just making it happen?”

Also, it’s establishing place that I often find the most satisfying part of any book. Good mysteries, for instance, I don’t find interesting because of the puzzle of “Who did it?” Really good mystery writers establish a sense of place and Mary Karr did that with The Liars’ Club. And, in the same way, Russell Baker did that with the era he’s writing about in Growing Up. You really felt a time in America from reading that book.

That time being the Great Depression?

Yes, and the years after it. He really gave a sense of the era that you couldn’t get from just a history book. I thought it was a marvellous book.

Your next choice is This Boy’s Life by Tobias Wolff.

This is, in the first place, a fine memoir on its own. But then the other thing that really interested me is that Tobias Wolff and Geoffrey Wolff, his older brother, both fiction writers, wrote memoirs. Geoffrey’s memoir was more about their father, and was calledThe Duke of Deception. That was also a superb book. The father was sort of a con man, and the parents got divorced. Geoffrey grew up mainly with the father, and Tobias with the mother. So I really think it’s almost a package, those two books, and it’s fascinating to see the difference in the lives of two brothers, who I think barely knew each other during their childhood. They weren’t half brothers, they were brothers, but they grew up in completely different situations. Both somewhat harrowing. Geoffrey was supposedly much better off, he was at boarding school, but it was still a very tenuous situation, since his father was always right on the edge of being either broke or in jail.

Looking through your choices they all seem to be about dysfunctional childhoods.

Most memoirs in America seem to be about childhoods that are unpleasant at least, and maybe more than that. There’s been an unfortunate atrocity race in memoirs in the United States. You’re meant to reveal some hideous secret in your memoir if you expect it to go anywhere. Probably at least incest or bestiality or something like that. Which I think is unfortunate. And I think that was the problem with that book A Million Little Pieces [James Frey]. There he was, a middle class druggie. I can go outside and throw a rock and hit a middle class druggie. He doesn’t stand out. So there’s a kind of pressure to make things worse than they were.

But maybe it goes back to the Tolstoy thing about happy families and unhappy families. I always thought when I started writing memoir that I was at a hideous disadvantage because, well, I wouldn’t want to admit this in New York, or in more sophisticated circles, I actually had a happy childhood. It’s somewhat embarrassing. My parents never argued, they were very interested in my welfare. My sister took more than her half of the backseat sometimes, but that’s a small complaint. So happy childhood memoirs are, I think, unusual.

This is even more of a reporter’s memoir than Russell Baker’s. Joe Lelyveld was twice South Africa correspondent for the New York Times, and won a Pulitzer Prize for a book on South Africa. Again, the family was somewhat dysfunctional. For instance, when he was five or six years old, simply because his presence was inconvenient to his parents, who were off pursuing something, he was left for the summer with the maid’s family on a farm of either Jehovah’s Witnesses or Seventh Day Adventists, I can’t remember which. He doesn’t seem to be particularly mad about it. But I told him that if my mother had read that book, she would have said, “Jewish people? Jewish people leave their child on a farm with 7th Day Adventists? No!” And his father was a rabbi. Though he didn’t sound to me a very religious one, he was a rabbi.

The thing that really interested me is that he actually went and checked his memory. It’s a different approach to a memoir. When I wrote a book about my father I didn’t go back and make sure that the family stories were true, which in any case is difficult to do, particularly if you’re not the sort of family that makes the newspapers every day. But what Lelyveld did was to go back and say, “I remember this but in fact that couldn’t have been, because that happened…chronologically that must be wrong.” So I thought it was a good approach to memoir, and markedly different from the way most people would write memoir. He wanted to say not just, “This is what I remember,” but, “This is actually true.”

And it’s an interesting story?

Yes it is an interesting story. His book isn’t about any awful sort of poverty or abuse or anything like that, but it is about a family that seems detached from their children.

I know Joe Lelyveld. I guess I know, to a varying degree, all these people, some just barely and some fairly well. After reading his book, I felt I understood him better. Which means that there was something which really rang true about it.

So which one of these memoirs is the funniest? I presume the John Mortimer one?

I think it’s the funniest of these, though there are funny parts in Mary Karr’s book. And I could have named five or ten other memoirs, but these were the first that came to mind. There’s actually a book that’s just come out on the art of writing memoirs. It’s definitely something that in the States has grown in the last 15-20 years. And then occasionally one of them breaks through, like Angela’s Ashes, which I could have named as well. I love that book. And that book I didn’t read called, Eat, Love, Pray or something. It didn’t sound like my sort of thing. But some of those books have been enormous successes.

Is memoir your favourite form, do you think?

I like novels too. It depends on the book. But it’s an interesting form and I guess another thing about it is that people, because they have that stuff in their minds for a long time, they polish it over the years. So they’re often written in a way that you can see the person has given it a lot of thought. There was another one, I think it was The Glass Castle, that I really liked. About this woman who had this awful childhood in West Virginia, and it opens with her in a cab and seeing her mother looking for stuff in a dumpster…