Whether you back Jack Lew for Treasury or not, you can't deny his Wall Street record. Unless you're an MSNBC pundit 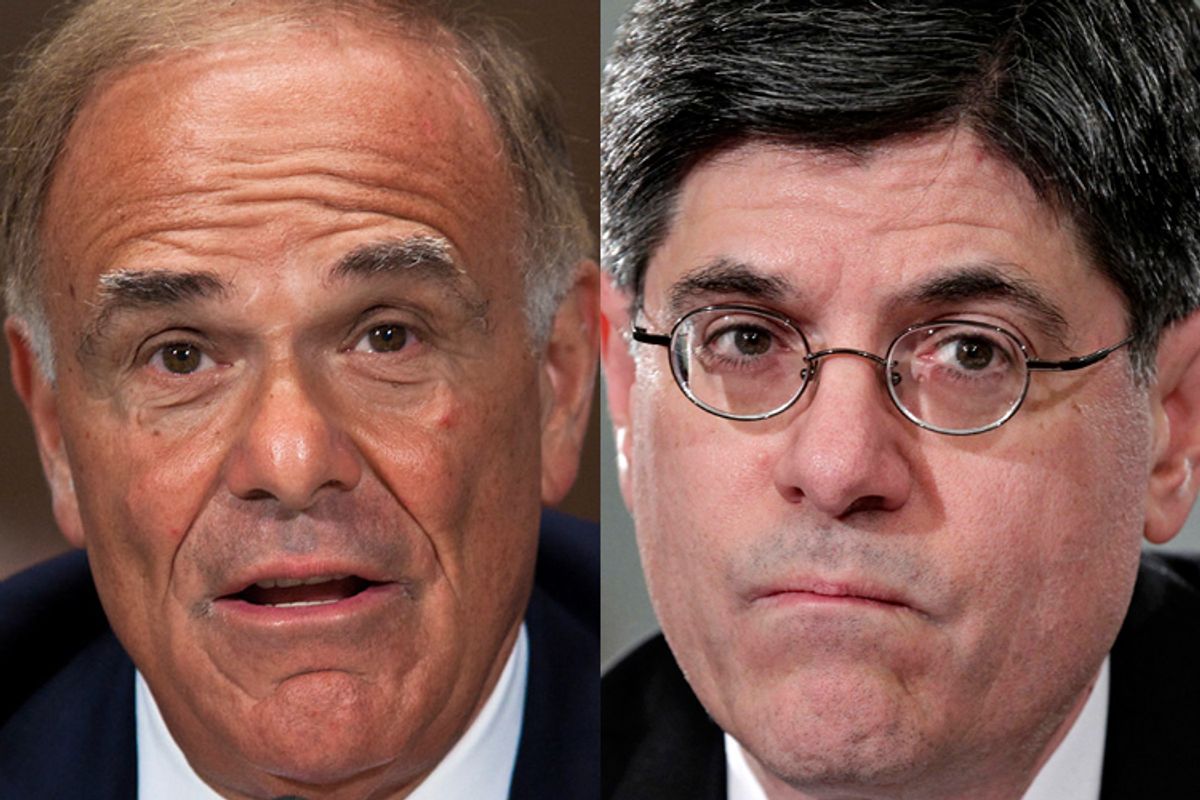 How do you define the term "liberal"? And how big do you think the progressive wing of the Democratic Party is these days? If you happened to flip on MSNBC on Friday, these questions may have bubbled through your mind during a powerfully revealing exchange over President Obama's nomination of Jack Lew to head the Treasury Department.

To appreciate exactly what was revealed, it's worth first reviewing the key parts of Lew's recent past.

As the Washington Post reports, from 2006 to 2008 the former corporate lobbyist and Clinton budget official "worked at Citigroup in two major roles, a notable line in his résumé given that as Treasury secretary, he would be charged with implementing new rules regulating Wall Street." Notable, indeed, as the Post notes "Lew did not have just any position at the bank" -- he was "a top executive in the Citigroup unit that housed many of the bank’s riskiest operations" that ultimately "helped drive Citigroup into the arms of the federal government's" $45 billion bailout (some of which was used to pay Lew's own eye-popping Citigroup bonus).

Soon after that debacle, Lew was rewarded with an offer to walk through the Wall Street-Washington revolving door and become President Obama's budget director. Not surprisingly, during his confirmation hearing, he loyally did the bidding of his pals in the banking industry by publicly insisting that the financial deregulation bills he once backed as a top official in the Clinton administration had nothing to do with the financial meltdown that pulverized the American economy at the end of President George W. Bush's term.

Once confirmed as Obama's budget director, it was much the same ideology from Lew.

He was Obama's budget Svengali when, as the Huffington Post recounted, the president agreed to extend the Bush tax cuts to the very wealthy and then, two months later, "proposed a spending plan to Congress that cuts funding to programs that assist the working poor, help the needy heat their homes, and expand access to graduate-level education." Channeling the ideology he championed at the Wall Street-funded Hamilton Project, Lew sculpted a budget blueprint to reduce the deficit by $1.1 trillion mostly through draconian cuts to spending rather than by returning to Clinton-era tax rates. Among those proposed cuts was a massive $400 billion cut to non-defense discretionary programs -- otherwise known as social safety net programs. Yes, that's right, in a nation where the rich are paying the lowest tax rates in decades, Lew spearheaded a plan whereby more than a third of deficit reduction would come through cuts to the tiny 10 percent of the budget devoted to discretionary social safety net programs.

Taken together, whether you like Lew or hate him, think his career is sterling or disgusting, believe his close relationship with Wall Street is great or awful, want him to be Treasury secretary or not, it's pretty clear his record is not one thing: liberal, progressive or, according to public opinion polls, representative of the views of most self-identified members of the Democratic Party.

That gets us, then, to the illustrative exchange on MSNBC on Friday about my old boss U.S. Sen. Bernie Sanders and his opposition to Lew's Treasury nomination on the grounds that Lew is too close to Wall Street to be an effective financial regulator.

While Sanders is still technically an independent, he caucuses with Democrats and, more important (as alluded to above), his views on such issues (and most others, by the way) are demonstrably representative of typical rank-and-file Democratic voters. Yet, despite that reality, when asked about Sanders' liberal critique of Lew, BuzzFeed reporter Ben Smith first called the Vermont lawmaker's opposition "crazy," declared that Lew's career proves "he is a liberal" and defended Lew as "a guy who spent his whole career on the left of the Democratic Party."

RENDELL: It's wrong to say that Bernie represents the entire left of the Democratic Party.

WAGNER: No, no, but I think (he represents) one wing of the very progressive left.

RENDELL (making a pinching motion with his fingers): A tiny wing.

BURTON: It's a small wing.

RENDELL: Bernie's a great guy, but it's a tiny little wing. It's probably a little feather.

BURTON: A feather on the wing.

Watch the video here to see for yourself how condescending the whole thing is (kudos to Wagner for staying on point and pressing the issue, by the way). Rendell and Burton are chuckling at Sanders and his position -- as if he's the funniest, fringe-iest thing in the world for daring to channel mainstream public opinion and question why a corporate lobbyist turned bank executive should be America's chief financial regulator.

Rendell, of course, may just be doing what Lew so loyally did as a Citigroup-suit-turned-government official: namely, parroting talking points from his financial-industry cronies. After all, though MSNBC did not identify the former governor as such, Philadelphia magazine notes that he is currently a "corporate consigliere Greenhill & Co investment bank" and the co-chair of "Fix the Debt" -- a "blue-chip cabal of 130-plus plutocrats who have anted up a $43 million kitty to fund a multimedia stealth campaign/public relations offensive" pushing to both preserve tax breaks for the wealthy and dismantle Social Security.

That said, regardless of Rendell's personal motivation, the revealing news in this MSNBC exchange should be obvious. Here you have two of the best-known and best-credentialed media spokespeople for the national Democratic Party -- one a former big-state governor and party chairman, the other a former mouthpiece for the sitting Democratic president -- agreeing that progressives who oppose Lew's nomination are not only "crazy," but at odds with what most of the Democratic Party stands for. As they insisted with condescending laughs, to voice opposition to a corporate lobbyist turned Wall Street executive turned conservative budget cutter as the next Treasury secretary is to supposedly speak only for "a tiny wing" of the Democratic Party.

In my book "Hostile Takeover," I analyzed how language is used to frame political debates in ways that are favorable to moneyed interests. When that's done effectively, those interests don't have to buy congressional votes because the political conversation has already whittled the scope of potential legislation down to only the proposals they already want.

Looked at from this perspective, the MSNBC exchange shows political elites so totally immersed in a political world where corporate talking points dominate that they have become utterly out of touch with where public opinion on economic issues actually is. That, or these elites are consciously working to manufacture the dishonest propaganda themselves (certainly a possibility with Rendell, considering his financial ties).

Looked at another way, though, perhaps Rendell and Burton are being embarrassingly -- if, inadvertently -- honest about the disconnect between the Washington Democratic establishment and the party's rank-and-file voters. Being so utterly ensconced in the money-dominated world of Washington politics, they probably see Sanders' position as only representative of a tiny segment of that particular world. In that view, they aren't wrong -- legislators like Sanders who actually have a problem with the Washington-Wall Street revolving door are few and far between inside the Beltway. And if, like Rendell and Burton, you view the "Democratic Party" as a party that exists only inside that world, then it is true -- Sanders' views represent only a "tiny wing" of said party.

But, of course, that's not the whole -- or even most -- of the Democratic Party. That two party officials nonetheless seem to assume it is -- to the point of making condescending jokes on national television -- exposes a party leadership that too often sneers at its own voters.