What does the "Girls" star's casual nudity say about us -- and the Howard Sterns made so uncomfortable by it? 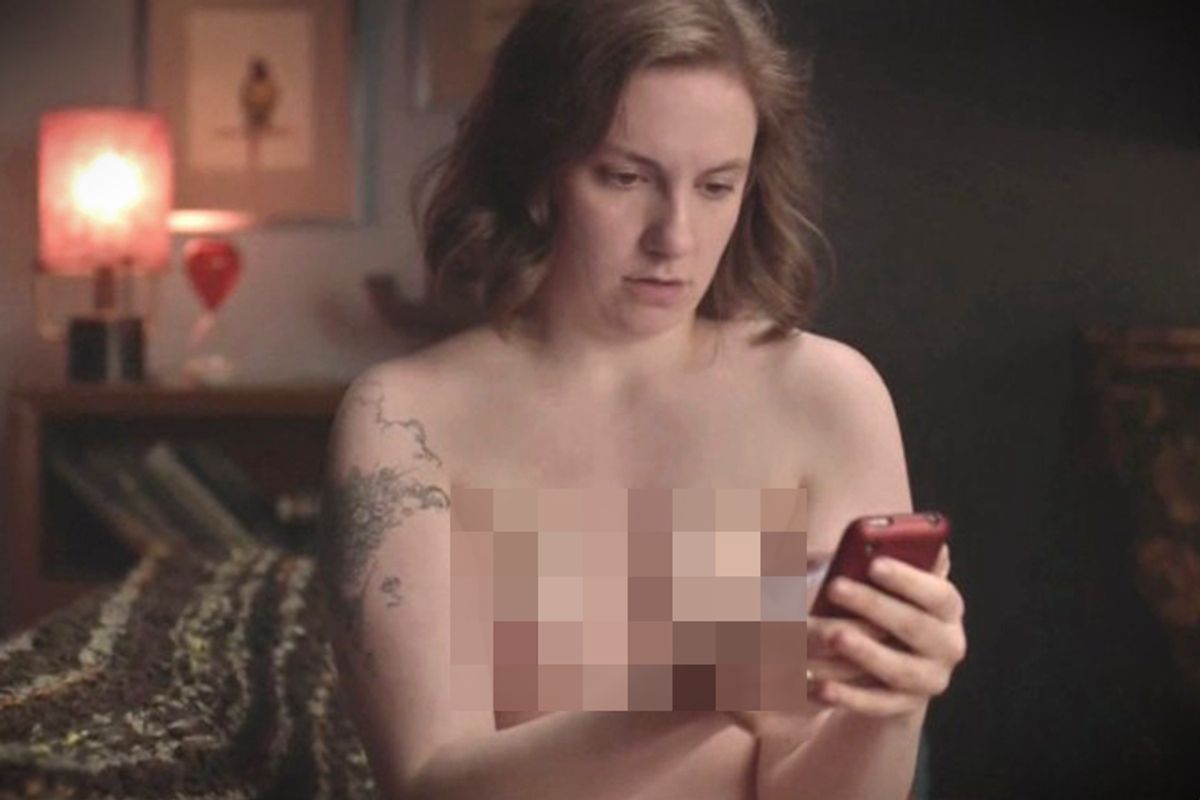 In the run-up to Sunday night’s “Girls” season premiere, the old repetitive war over the show’s content took on a new dimension: Radio shock jock Howard Stern attacked neither the youth nor the perceived entitlement of showrunner/star Lena Dunham, but her display of her body. Stern called Dunham “a little fat girl who kinda looks like Jonah Hill and she keeps taking her clothes off and it kind of feels like rape ... I don't want to see that.” New York Post TV critic Linda Stasi took a similar tack, calling Dunham “a woman with giant thighs, a sloppy backside and small breasts ... compelled to show it all.”

Anyone who saw the premiere knows that even by the standards of "Girls," there was a great deal of nudity in the 30-minute episode, which ended with Dunham’s character Hannah stripping down to her thong. An episode later in the season, teased in the season’s trailer, has Hannah baring her breasts in a revealing mesh top everywhere from a dance club to a pharmacy; when asked what she is, or isn’t, wearing, she nonchalantly replies, “Oh, a shirt!”

The real-life Dunham is equally unfazed by criticism. Appropriating Stern’s mocking terms, she told David Letterman: “It put me in the best mood! I just want to be like, my gravestone says, 'She was a little fat chick and she got it going.’”

We’re a long way from Sarah Jessica Parker demanding a no-nudity clause so that she could wear a bra while in bed with Mr. Big. Dunham’s audience, for whom issues of race and class have been far more contentious than those of her body, seems to accept her nudity as part of the story line.

“Not only does she look like them, but her matter-of-factness about her body is the way they feel,” said xoJane editor Jane Pratt of her writers in Dunham’s age group. Pratt ran an essay by a writer praising Dunham’s showing off a body “remarkable in its unremarkableness.”

Perhaps nudity of all sorts on air is coming to be, well, unremarkable too, rather like depictions of violence: something to which we’ve become desensitized. Said Pratt, “It’s very matter-of-fact -- and that’s one of the reasons it has made an impact. It’s not like she’s trying to make a statement. It’s just part of what she does. And the matter of factness of that — that’s the strongest statement.” She compared the series’ plot-driven use of nudity to those Dove ads that showed off the bodies of “real women,” as opposed to models. “What does that mean? It’s labeling, still, as opposed to just getting over it and stopping making a big deal out of what is absolutely normal diversity.”

In early “Girls” episodes, Dunham mocked Hannah’s body at times by having her wolf down cupcakes and buy ice cream cones after attempting to jog. This early into Season 2, though, her body shape is off the table as a matter of discussion. It’s the fact of her body, and what she does with it, that moves the plot forward.

Such arguments, prompted at last on the Internet by Dunham’s utter comfort and seeming lack of explicit political intent, have long been tropes of nudists and naturists. “Naturism gives women power or gives them the feeling of being empowered. It makes them feel, I’m in control here,” said Nicky Hoffman, the editor of the Naturist Society’s magazine, noting that accepting nudity necessarily means getting over micro-analysis of bodily quirks. While Dunham (obviously) isn’t affiliated with the pro-nudity movement, her fixing the lens on herself makes the issue of exploitation moot. (Even the male-gaze chop shop MrSkin.com, which publishes nude pictures of glamorous actresses repurposed from TV and movies, recognized the auteur in Dunham, praising her in a roundabout way for “direct[ing] herself to get nude.”)

“Nudity in our society is associated with sex, and a nude woman is automatically considered a ‘slut’ and someone who is asking to be disrespected or raped,” said Gypsy Taub, one of the activists fighting the recent ban on public nudity in San Francisco, where nudists had traditionally traversed the Castro.

The “entitlement” perceived by fans and detractors of “Girls” — Hannah feels no shame about expressing her needs for sex, for attention, for money from her parents — extends to pride in a body that’s neither model-thin nor traditionally “plus-size,” just hers. Said Christina DiEdoardo, the lawyer fighting the San Francisco nudity ban, “If I had a dollar for every time I saw a comment, like, ‘I’d be in favor of [ending the ban if the nudists] were hot chicks.' But it’s about the speech, not about who’s speaking. If it were attractive women in their early twenties, people would not be offended by this. But because they’re real people, men are offended by this.”

“Seeing nudity that’s not there for titillation and that represents different body types is still somehow shocking to people,” said Pratt, the editor, “or revolutionary, or horrifying to people, or considered something that should be Photoshopped. But her visibility right now and what she’s doing with showing herself and not making any big thing about it, it’s a super important moment in evolving body culture.”

And the culture’s being moved forward not merely by the show itself but by the discourse, often enraged, surrounding it. Pratt admitted that she hadn’t yet seen “Girls,” but had seen the coverage, both positive and negative. “I’m definitely aware of some people seem to be outraged by how much of her body Lena Dunham reveals on the show. It may not be that she’s driven to show us her body however that body looks. It may be that it’s just part of the story line.” Sometimes, a mesh shirt is just a mesh shirt.