A rich moderate group vows to focus on actual reform proposals, however nonsensical. Who are they kidding? 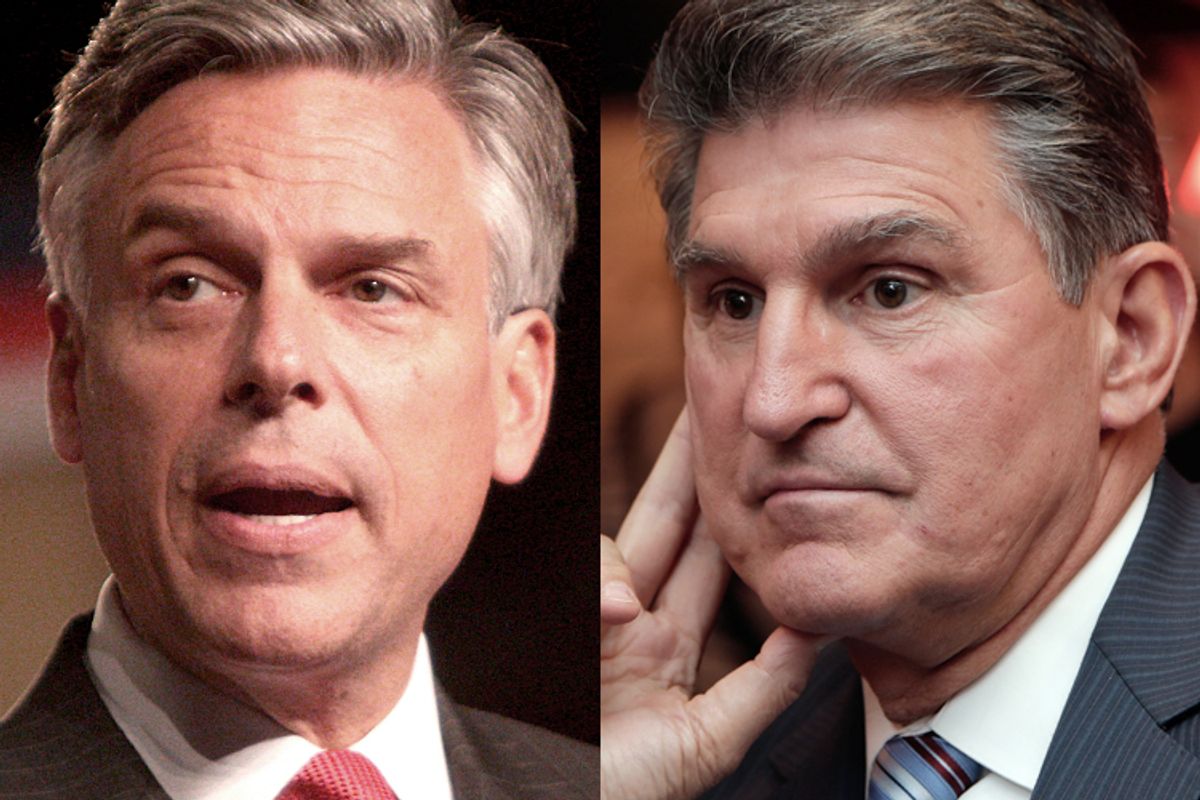 For two years, the nonprofit group "No Labels" has brought together some of the most respected and influential members of the New York and Washington political and business elite to publicly fight for a set of vague goals related to "civility" and "problem-solving." They have, so far, failed to advance their cause, because their cause is nonsense. But they keep trying, bless their hearts. Their newest rerelaunch is underway, with some sort of conference in New York today, and their new mascots are figures hated by everyone besides people who reflexively think angering your own party is self-evidently virtuous: Former Utah Gov. John Huntsman and current Sen. Joe Manchin, D-W. Va.

But No Labels says they've heard your complaints. They claim they're finished with promoting "centrism." Instead of imagining themselves the arbiters of the imaginary "middle," they will fight for real reforms that will end congressional dysfunction.

"We started off thinking there was a broad group in the middle, but quickly realized that wasn’t productive. People have very different notions of what the middle is,” said Mark McKinnon, a longtime adviser to former President George W. Bush and a No Labels founder. “So we grew beyond that, and now have strong conservative and strong liberal partisans who want to participate.”

"It’s not about centrism, it’s about a new attitude toward the realities we face. It’s about finding Democrats and Republicans who will check their egos at the door,” said Huntsman, whose decidedly centrist run for the 2012 Republican presidential nomination flamed out early in the primary process.

That is actually refreshing to hear, from these people. No Labels is learning! I have argued before that rich self-declared "moderates" should focus on specific procedural reforms instead of spending all their time crying about Tip O'Neill and begging for civility. Of course, instead of starting big money-wasting nonprofits, they could contribute to the various existing nonpartisan think tanks and advocacy organizations already fighting for electoral and congressional reform -- whoo, FairVote! -- but I guess there is always room at the party.

So what's first on the agenda? Nonpartisan redistricting? An end to the secret hold? Oh, no, it's this gimmicky budget thing again:

Both lawmakers acknowledged that the Problem Solvers’ group wasn’t ready to bridge the partisan divide over looming crises like the coming battle over raising the nation’s debt ceiling, not to mention longer-term challenges like the solvency of Medicare and Social Security.

But they’ve coalesced around issues pertaining to the way Congress functions, like “No Budget, No Pay” legislation pushed by No Labels that would bar lawmakers from receiving a salary without passing a federal budget.

This proposal to cut off congressional pay if they don't pass a budget has long been a cornerstone of the No Labels policy agenda. It neatly illustrates the ignorance that drives the entire campaign. "Passing a budget" is the goal, not "passing a good budget." A budget that increased military spending while cutting anti-poverty programs would, then, be preferable to a continuing resolution maintaining current spending levels. Furthermore, the penalty is mostly symbolic and arguably destructive: Congress is full of very rich people, and cutting off their salaries only harms the members of Congress with net worths closer to those of the average Americans they ostensibly represent. This is the sort of "reform" proposal that sounds very good when a caller proposes it on talk radio, until you think about it for 10 additional minutes.

No Labels simply can't bring themselves to end their love affair with deeply silly symbolic proposals that have nothing to do with the forces preventing Congress from "solving" real "problems." They are pushing for filibuster reform and straight up-and-down votes on appointments -- good! -- but they pair those goals with incredibly silly proposals like mandatory bipartisan seating. As long as the people who can command media attention waste their time on gimmicks, actually constructive reform campaigns will continue to be sidelined and dismissed.