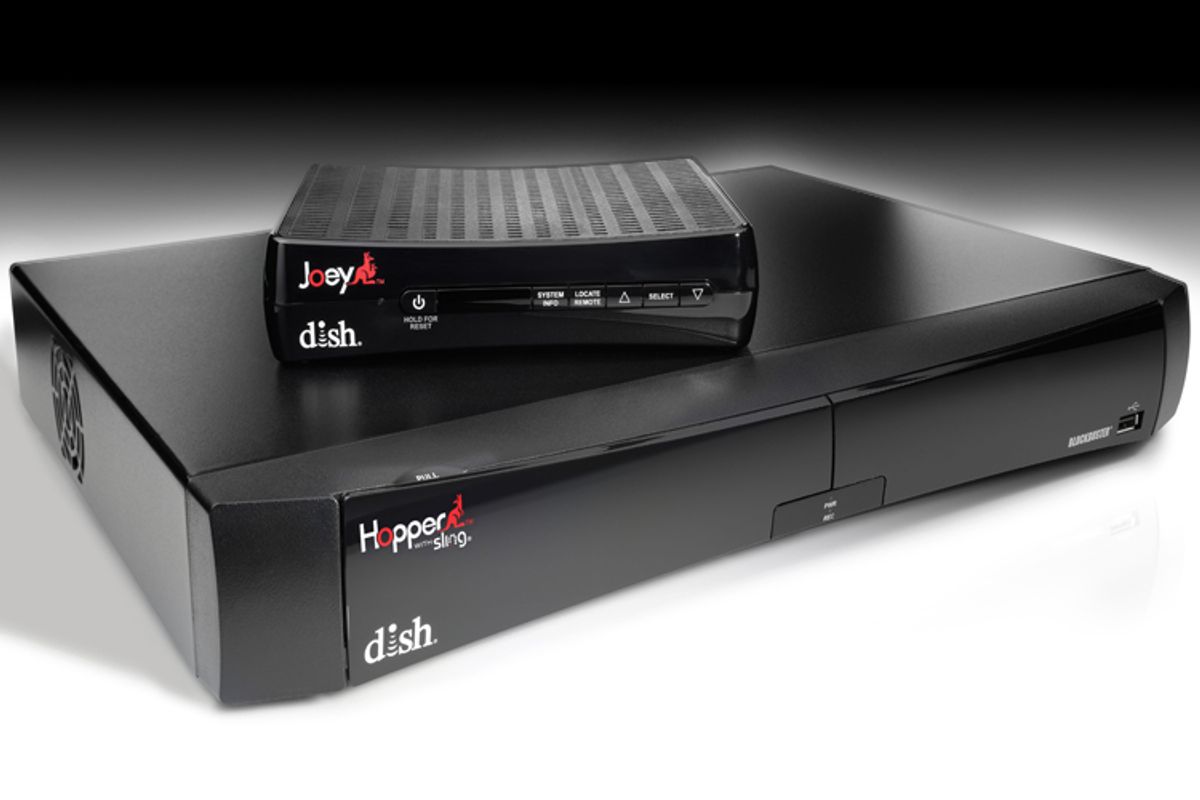 What did the online technology news network CNET get for sending a 90-strong legion of reporters, editors and other staff to the Consumer Electronics Show in Las Vegas? A big fat conflict-of-interest mess. Staffers are quitting in protest, executives at both CNET and its corporate parent, CBS, are coming off as craven tools, and a story that CNET should own -- the future of TV -- has turned around and bitten the network on its ass.

The Verge's Joshua Topolsky has the most details of a debacle that is both awful and kind of hilarious. Last week, 40 CNET staffers gathered together to vote on their official "Best of CES winner." The prize went to the Dish Hopper, an every-bell-and-whistle-possible DVR cooked up by the Dish Network that does all kinds of neat things, like stream shows to your iPad.

But there was a problem. CBS and three other television networks are currently engaged in litigation with the Dish Network over the Dish Hopper -- or, to be precise, a feature of the Dish Hopper that facilitates skipping commercials.

We're not talking about your run-of-the-mill 30-second skip button here. One of the most highly praised aspects of the Dish Hopper is its Primetime Anytime feature. The Dish Hopper can record all the prime-time shows on the four major broadcast networks for several days consecutively and store them for your viewing pleasure. The day afterward you can pick and choose what to watch -- without commercials, using the Dish Hopper's "Auto-Hop" feature.

Primetime Anywhere in conjunction with Auto Hop got the networks hopping mad. Fox News, not entirely without justification, declared that the Primetime Anytime feature "will ultimately destroy the advertising-supported ecosystem." Topolsky reports that CBS CEO Leslie Moonves told investors that "Hopper cannot exist ... if Hopper exists, we will not be in business with (Dish)."

But what happened next at CES was a fiasco. Top management at CBS ordered CNET to rescind its vote, and compounded that gross editorial intervention with an additional order to the effect that CNET wasn't allowed to explain exactly what had happened. On Monday, one of the longest-tenured reporting stars at CNET, Greg Sandoval, resigned, saying via Twitter that "I no longer have confidence that CBS is committed to editorial independence" and that "CNET wasn't honest about what occurred regarding Dish." Lindsey Turrentine, editor-in-chief of CNET Reviews, did herself no favors in her own account of the mess, saying that "maybe" she "should have quit" but that "If I had to face this dilemma again, I would not quit." Uh, what?

As a fellow journalist, I feel for colleagues put in an impossible position. CNET's brand just took a huge hit, and that sucks for everyone concerned. But there are some things I don't quite understand about this story.

Everyone who has covered the evolution of TV since TiVo launched the DVR age knows that ad-skipping technology is a sensitive topic for the broadcast networks. Understandably so -- that's how they pay their bills. For 40 employees of a company that is owned by a television network to get together and put their Best-of-Show-imprint on a device that takes dead aim at the business model of their owner is provocative, to say the least.

I'm not saying the device didn't deserve the honor; I'd certainly like to play with the Dish Hopper. But it amazes me that no one appeared to see the angry corporate reaction coming.

After the vote, we communicated the winners, as we always do, through normal channels. CNET immediately got down to the business of preparing for a massive stage show the following morning and preparing a press release.

Later that evening, we were alerted to the legal conflict for CBS. All night and through to morning, my managers up and down CNET fought for two things: To honor the original vote and -- when it became clear that CBS Corporate did not accept that answer -- to issue a transparent statement regarding the original vote.

CNET lost both battles. So here's the question: Did the CNET executives, not to mention the reviewers, not understand that singling out the Dish Hopper would raise CBS' hackles? If not, they look dumb -- it's their explicit job, after all, to cover such news as litigation between broadcast TV networks and satellite networks over the capabilities of new TV-watching hardware. Somewhere, alarm bells should have been going off.

And maybe they were. But if CNET was aware of the potential conflict-of-interest and went ahead anyway, it's almost worse for the company, because by acceding to CBS' demands to rescind the vote CNET ends up looking like it didn't have the courage of its convictions. That's picking a fight and then retiring from the ring before the bell has rung.

That said, it's hard to think of anybody who comes out of this looking worse than CBS. A network that built its reputation on the back of a phenomenal news-gathering operation has betrayed core journalistic principles. What would Edward Murrow say?

Maybe this: "We cannot make good news out of bad practice."