Undercover with the neo-Nazis 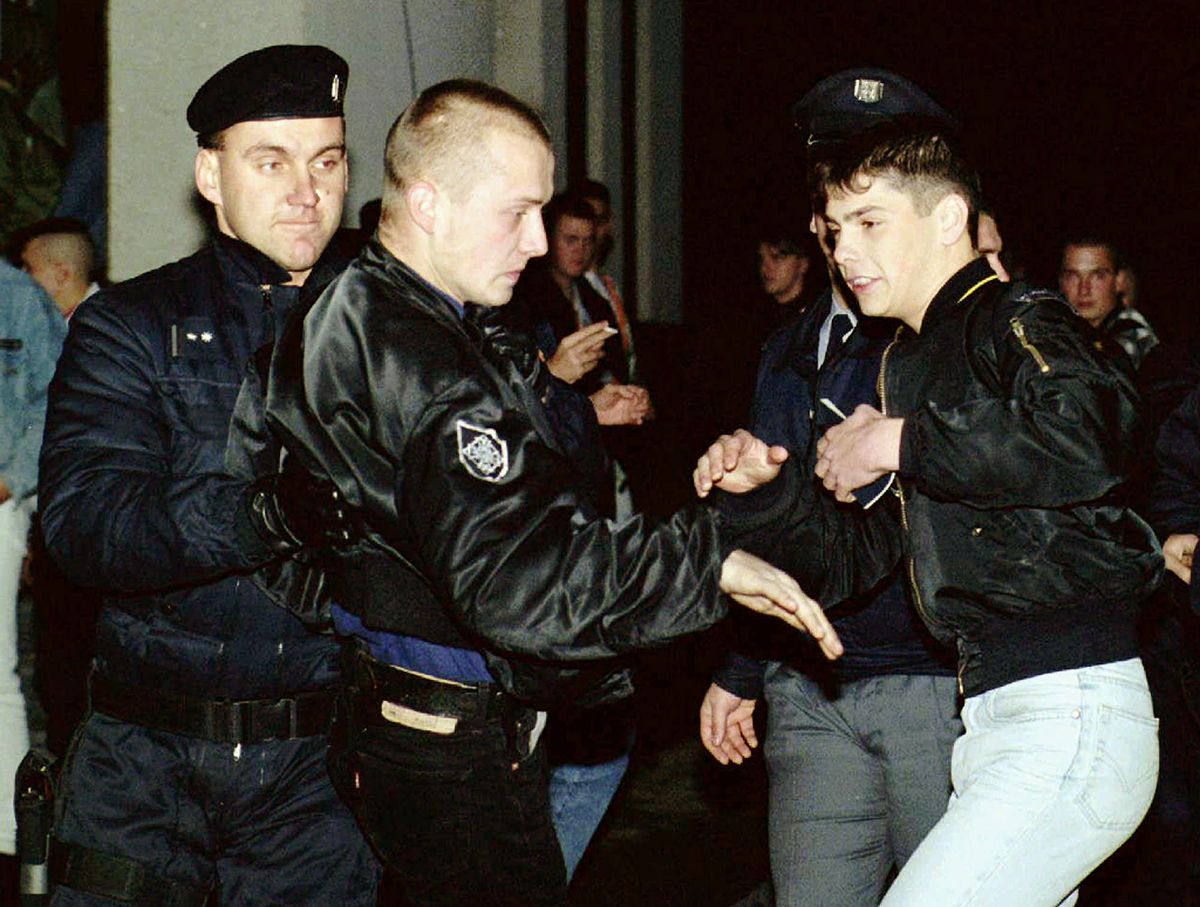 BERLIN, Germany — This time around, he wore dark glasses, a bushy blond beard and a black beanie pulled down low. It was only his latest disguise, used to greet foreign press at a conference in Berlin.

The man who goes by "Thomas Kuban" must at all costs keep his identity a secret — after all, Europe's neo-Nazis would kill to get their hands on him.

For 15 years, Kuban, now in his mid thirties, risked his life secretly filming neo-Nazi rock concerts, events he says are the conspiratorial heart of Europe's diverse and burgeoning neo-Nazi scene.

His camera rolling, Kuban has witnessed hundreds of fanatics venerating the perpetrators of Auschwitz and calling for Jews and foreigners to be murdered. He has watched dumbfounded as crowds of thousands raise their hands in the Hitler salute shouting, “Sieg Heil,” or as Austrian police shook hands with neo-Nazis.

“If I had been caught, the neo-Nazis would have beaten and kicked me — they might well have killed me,” he told GlobalPost.

“Mass crimes take place at every event and no one does anything,” he added, referring to the Hitler salutes that are illegal in Germany and Austria, and the banned, hate-filled songs sung under the noses of policemen.

“I am shocked at how weakly the security services deal with the neo-Nazis in Germany, allowing them a legal vacuum in which to operate.”

A six-year killing spree of foreigners by a small trio of far-right extremists came to light in November 2011. Outrage spread among Germans who felt that law enforcement overlooked far-right suspects.

Since then, Germany has taken steps to increase its monitoring efforts. Officials have set up a database of suspected right-wing threats and, in December, kick-started a renewed attempt to ban the far-right NPD, the National Democratic Party, with a final decision due in the coming months.

But Kuban is far from satisfied. He says there is no sign of anti-foreigner prejudice dying out in wider German society.

Reunified Germany has struggled to purge itself of violent far-right extremists, who have murdered at least 63 victims since 1990, according to government estimates. The real figure is widely believed to be far higher, says Kuban, and could be closer to 180.

Despite increased state efforts to monitor the scene, the group of potentially violent right-wing extremists continues to grow. In 2012, the German intelligence service identified some 10,100 violent neo-Nazis in the country, up from 9,500 two years ago. Many of these new recruits were drawn in by
fascist music, says Kuban.

“The music attracts many young people to the scene, it brings new blood,” he said.

Kuban's unusual mission began in the 1990s, after a colleague told him about secret neo-Nazi rock concerts happening nearby. Sneaking along that first time to watch from a safe distance as hundreds of neo-Nazis congregated to sing along in unison to the hate-filled lyrics of driving fascist punk rock, his curiosity was piqued.

That soon hardened into a resolve that would carry him for the next 15 years. “I couldn't believe that hundreds of neo-Nazis crept off to secret concerts that the police either didn't know about or only found out about very late,” he said. “I thought to myself: 'OK, there's something new to be uncovered here.' The idea of breaking down those conspiratorial structures awoke my journalistic ambition.”

“I think it's terrible for the people of [Germany] if undemocratic movements spread and grow like that. I wanted to give the public insights into this scene,” he added.

Kuban began devoting vast amounts of time and his own money to making inroads into the scene. He went to dozens of concerts and searched for hidden online extremist forums.

Given the flurry of activity he was uncovering, he was shocked to discover that the media wasn't interested in his work, even when he offered to risk his life smuggling cameras in to film neo-Nazi underground activities.

“Many of [the German public broadcasters] didn't even reply, others told me they weren't interested,” he said, adding that one editor told him he had seen it all before, referring to what Kuban says was worn-out, decade-old library footage.

In 2003, Kuban finally placed some of his work — German news magazines Spiegel and Stern said they would show his footage on their websites.

“The neo-Nazis were outraged because they realized that the times when only 10-year-old material made it out of the scene were over,” he said. “This bastion in which the neo-Nazis had felt completely safe at these secret concerts had been broken down.”

The first death threats against him appeared online soon after: “If we catch him at a concert then we'll get him up on stage and we'll do him in,” wrote one neo-Nazi. Another chimed in: “we'll solve this problem of filming at concerts with 'two-thirds fuel oil, one third petrol'” — shorthand for a Molotov cocktail.

Faced with the all-too-real prospect of a violent death if he was caught, Kuban knew his disguises and numerous fake online personas had to be watertight.

“The camera had to be well hidden and my false identity so elaborate that no suspicions would be raised ... otherwise the fear would have been too much and I wouldn't have been able to go in,” he said.

Traveling the length and breadth of Europe with his button-hole camera — from Hungary to Britain, Italy to Belgium — Kuban dressed as a neo-Nazi, chanted like a neo-Nazi, sang the racist songs like a neo-Nazi.

Over eight years, at nearly 50 gigs, he acted just like one of the fascists he was systematically trying to expose. For each event, Kuban grew different facial hair and wore different neo-Nazi-style clothes — typically boots, a black T-shirt, combat pants or jeans and a baseball cap — disguises he found surprisingly effective.

“Nobody was ever suspicious of me,” he said. “For the first few years, the neo-Nazis had no idea who it was. They thought it could be the [German secret service], or even Mossad [Israel's spy agency].”

Within 48 hours of Kuban's films appearing online for the first time, the neo-Nazis began tightening security. Body searches and metal detectors became the norm at every gig, he said.

“All the time they were looking for that camera,” he says. “I was almost caught out by a metal detector once, in Italy in 2006. There was a body search first, then you were allowed a few meters onto the site, and then there was a metal detector after that. I was scared, of course, I didn't know there'd be a metal detector and then suddenly I was facing one.”

Minimizing personal risk began to preoccupy Kuban. He let few people know about his secret mission. His parents repeatedly begged him to give it all up for a quieter life, though they stood by him and gave him money to continue when he was broke.

“My ethics are heavily influenced by my parents,” he told GlobalPost. “My mother and father are heavily engaged with the Christian church. I'm very religious, too — I live according to Christian values and beliefs.”

Growing up in West Germany in the 1980s, Kuban said he heard terrible stories from his father, who worked with asylum seekers as a welfare officer. One man stands out, an asylum seeker from Eritrea who had lost an arm when he drove over a landmine in his truck and came to Germany seeking shelter.

Kuban remembers defending foreigners from verbal attacks on the playground at age 8.

“The other kids would repeat what they heard at home, that the foreigners were only coming to Germany to exploit us and to take our jobs,” he recalled. “I remember arguing against that because I knew how much asylum seekers suffered and what terrible things had happened to them.”

Almost three decades on, interest in his work remained minimal. Kuban decided to make one last-ditch effort in 2007 to gain a wider audience for his footage, most of which had never been shown.

He agreed to work with documentary filmmaker Peter Ohlendorf on “Blood Must Flow: Undercover Among neo-Nazis.” The documentary, which premiered at the 2012 Berlinale film festival, forced him out of anonymity and into the limelight — and the pseudonym "Thomas Kuban" was born.

“I was used to a completely different role, of moving around anonymously in the crowd — that's what I did in the kind of research I was doing, which was also my passion,” he said. “But I had no choice but to play the central role in this film if I wanted to get my research out to a wider audience.”

But the documentary has only put him further in debt and German sales of his book, “Blut Muss Fliessen” (Blood Must Flow) remain disappointingly slow.

Defeated in his mission, Kuban said it is time to take off the disguise and return to a normal existence.
“It's over,” he said. “The neo-Nazis don't know who I am, I'm not in danger. I'll just disappear and live under my real name.”

“My only plan is to stop the whole thing as soon as possible ... I won't leave Germany, it'll just be that [I] will completely disappear from public view. Then I can live my normal life and no one will ever know that I was Thomas Kuban.”

But the decision to give up the disguise wasn't easy, he said. “It was the hardest decision I ever made ... It's clear to me that there's so much more to investigate.”