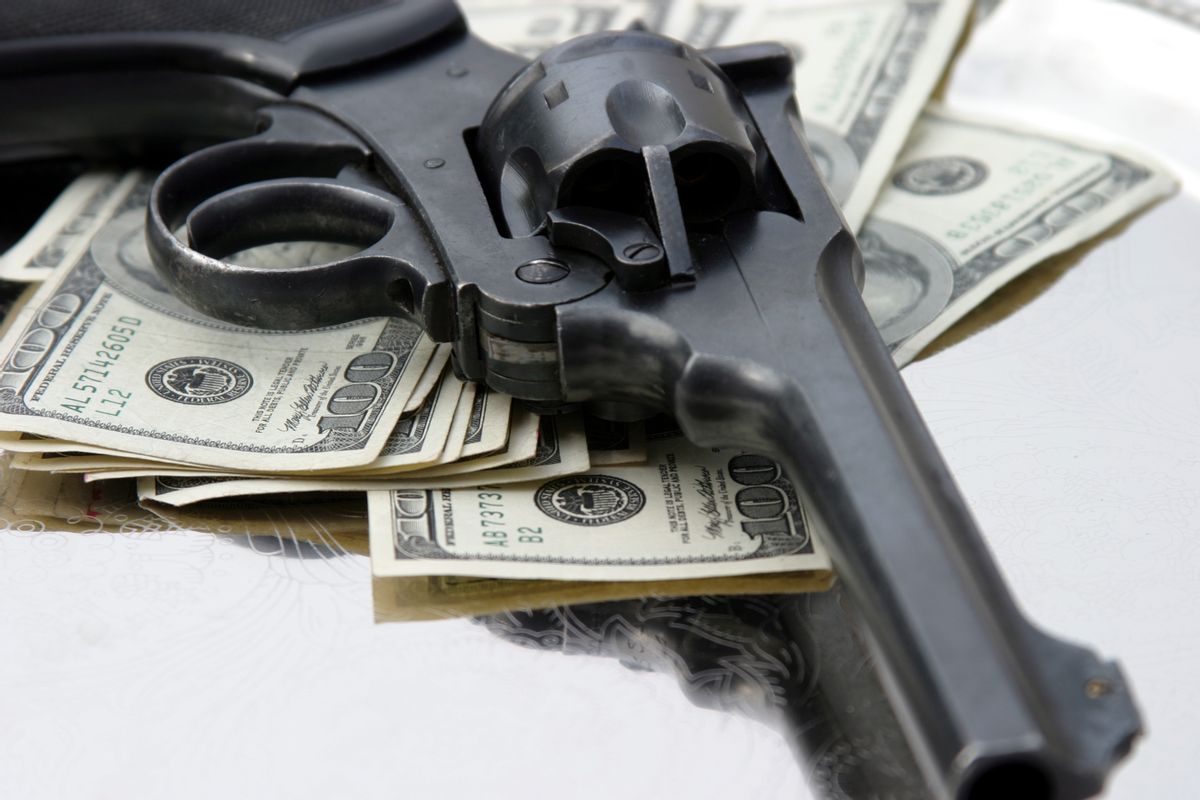 When an NRA official threatened legal action over the destruction of guns from a gun buyback event, he cited an Arizona law that sprung  from a partnership between the NRA and the American Legislative Exchange Council, the conservative shop that pushes model legislation in state legislatures across the nation.

It began earlier this month in Tucson, Ariz., when city officials organized a gun buyback to mark the two-year anniversary of the Gabrielle Giffords shooting. Locals turned over their guns to law enforcement, and got a $50 Safeway gift card for each gun in return. Officials wound up destroying a total of 212 guns.

Before the guns were destroyed, Todd Rathner, an Arizona lobbyist and NRA national board member, threatened to file a lawsuit. "We do believe that it is illegal for them to destroy those guns," he told NPR. "If property has been abandoned to the police, then they are required by ARS 12-945 to sell it to a federally licensed firearms dealer, and that's exactly what they should do."

The Tucson city attorney called Rathner's interpretation a misreading of the law, and the city went ahead with destroying the guns anyway. Rathner, for his part, told the Arizona Daily Star: "If we can pass legislation faster, we'll pass a law that says we'll charge the city of Tucson and the Police Department some exorbitant amount of money for every firearm they destroy." He added: "We'll pursue it either through litigation or legislation."

The threat brings light to a series of laws, pushed by the NRA and ALEC, that prevent states from destroying guns, and instead require law enforcement to auction them off (or, in some states, use the guns themselves). Arizona's version of the law was signed by Gov. Jan Brewer, R-Ariz., herself a former member of ALEC, in April, 2012, as Brendan Fischer from ALEC Exposed points out.

But, as Bloomberg News reported in August, 2011, Arizona was not the only state to receive the model legislation, a "brainchild" of the NRA that was adapted by ALEC. The law, called the  "Firearms Destruction Prevention Act" and occasionally the "Disposition of Firearms in State and Local Custody Act," also passed in Kentucky, Tennessee and Alaska, for instance, though failed in Alabama.

From Bloomberg at the time:

The model legislation was drafted and approved by ALEC’s public safety task force, which included representatives from stun-gun maker Taser International Inc. (TASR), energy conglomerate Koch Industries, the American Bail Coalition, and the NRA, according to ALEC documents. Corporate and special interest group members seeking to serve on task forces charged with writing legislative language can pay as much as $35,000 or more to get a seat at the table, according to ALEC’s web site.

ALEC's public safety task force, which was also responsible for the "Stand Your Ground" laws, was technically broken apart in April of 2012 after some bad press in the wake of the Trayvon Martin shooting in Florida. The group said it would instead focus on economic issues and job creation.

But, Republican State Rep. Jerry Madden of Texas, who chaired the task force, admitted that work on the same issues will be transferred to other committees. "ALEC's decision won't impact the important issues we've worked on," Madden told the Christian Post.