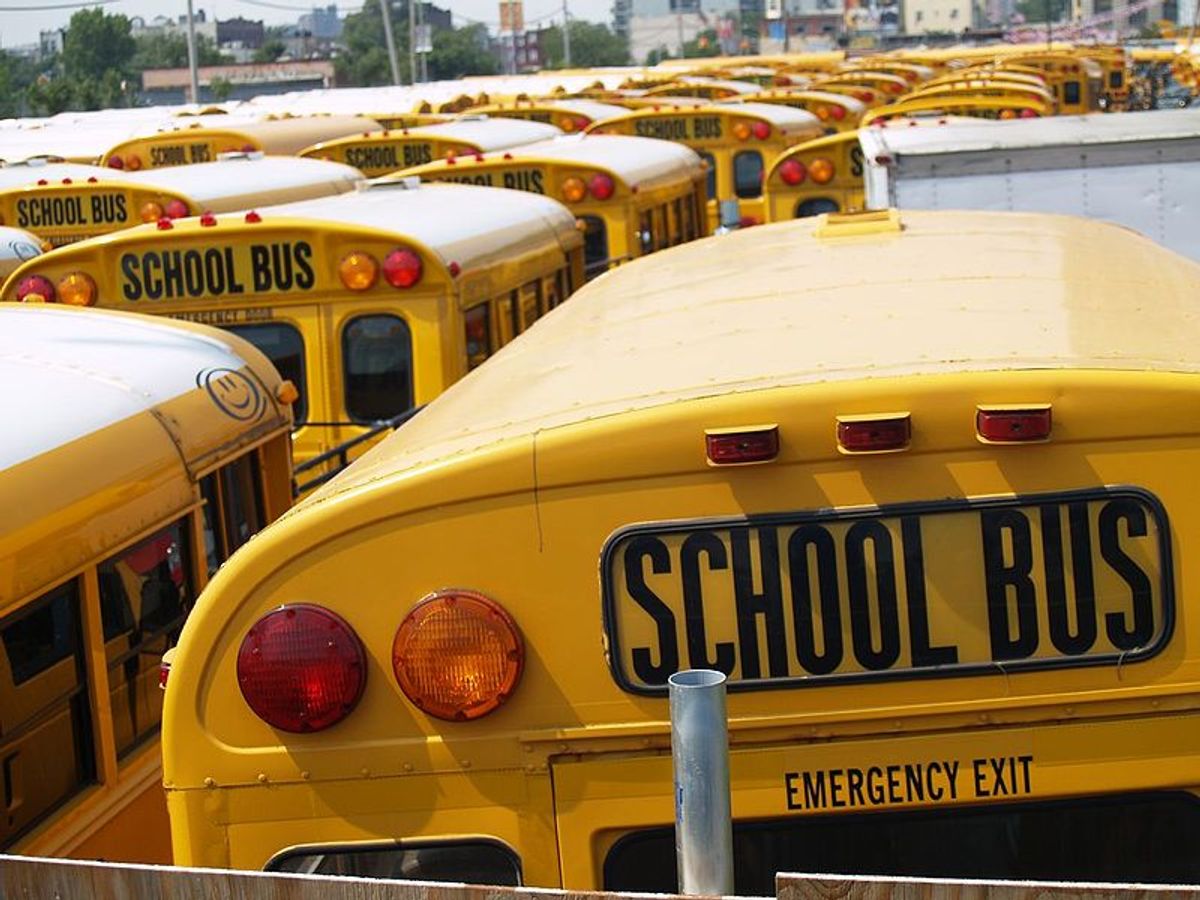 On Wednesday the school bus drivers of New York City are going on strike. The strike, threatened for weeks, comes as a result of disputes over certain job protections absent from new bus company contracts.

Local 1181 of the Amalgamated Transit Union expects more than 8,000 bus drivers and matrons to strike, affected over 150,000 school children. As was the case during the week-long Chicago teachers strike last, city officials are framing the strike in terms of harm done to children and parents.

"With its regrettable decision to strike, the union is abandoning 152,000 students and their families who rely on school bus service each day," Mayor Michael Bloomberg said in a statement. The city is providing free Metro cards Wednesday to students and parents affected by the strike and reimbursed private transport for special needs children.

The walkout was precipitated by the city's push to privatize their yellow buses. In an attempt to cut spending on transportation, the city has put bus contracts with private bus companies up for bid. The drivers union has vociferously opposed the move, arguing that drivers will be thrown into precarity if new bus companies win city contracts and don't hire them. Mayor Bloomberg has stressed that job protection clauses to allay these concerns cannot legally be written in to private contracts.

The dispute is simple -- it’s about saving money. As New York City schools chancellor David Walcott has noted, the city has operated its school-bus contracts without any “significant competitive bidding” for 33 years. During that time, something called “Employment Protection Provisions” ensured job security for senior workers, even if the city changed bus companies -- meaning that experienced drivers were rehired year after year. But the contracts have gotten too pricey; more than twice what Los Angeles pays per student -- and the city now plans to offer the contracts to the “lowest responsible bidder.” The union representing the school-bus drivers, Local 1181 of the Amalgamated Transit Union, is asking for Employment Protection Provisions to be included in the new contract to protect workers from losing their jobs to newer, cheaper labor. But due to a state court of appeals decision last year, in which the court ruled to exclude the provisions based on competitive bidding laws, the city says its hands are tied.

... Part of the significance of this dispute is that while the importance of job protections for current bus drivers is difficult to quantify, the city's need to reduce the budget is as plain and clear as the budget numbers themselves. In the face of the millions of dollars the city stands to save with cheaper contracts, why should it matter if, for example, 22,500 special-needs students find themselves with brand-new bus drivers one day?

It matters because how we treat those who care for certain children reflects how we value those children. It creates a system in which workers entrusted to be responsible for a child's safety are utterly replaceable in the name of protecting the bottom line.

The city has stressed that any new drivers would be rigorously trained and evaluated, but as Knefel stresses, this ignores the fact that children -- particularly special needs children -- develop important routines and trusting relationships with drivers. "As minor as it may seem, a bus driver or matron can truly provide a sense of safety for a child, something we have spent the last month engaged in national conversation about, in the wake of the Newtown shootings."

A number of parents have stood by the union on this point. "I'm concerned about what happens if the drivers lose their seniority, if they're less experienced," Valdes-Dapena, the mother of a 10-year-old, told the AP. "You can teach someone to drive a school bus, but what happens when all hell breaks loose behind them?" she asked, explaining that it takes experience to deal with situations like bus breakdowns, medical emergencies of kids with special needs or traffic, when kids get frustrated or unruly... The drivers we have now — I'd trust them with my own life," she said.

Every time school and school-related staff threaten job action,  critics shift the fulcrum away from issues of job security, privatization and precarity onto how children and parents suffer during strikes. "We hope that the union will reconsider its irresponsible and misguided decision to jeopardize our students’ education," said Bloomberg in a perfect distillation of this "think about the children" rhetoric. However, as Knefel and others have pointed out, removing job security from education workers will harm the city's children far more in the long run.