All policing, no protest around the inauguration 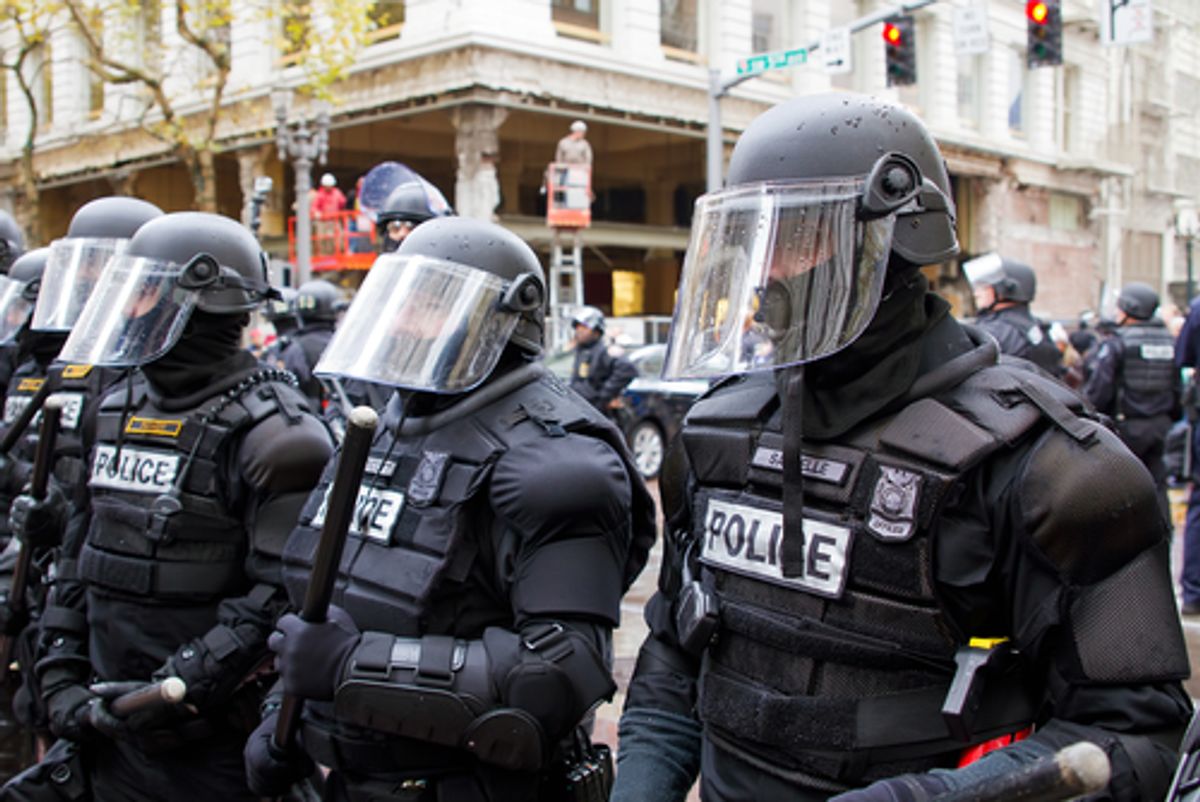 In recent years I've regularly noted the unabashed militarization of protest policing. Building on a system of summit security established at the 2003 Free Trade Area of the Americas (FTAA) meeting in Miami, the "Miami Model" of militarized, weaponized policing has crystallized into standard procedure for gatherings designated National Special Security Events (NSSE).

Ahead of the presidential inauguration in Washington Monday, an NSSE that will draw 3,000 law enforcement officers and some 13,000 military troops to the area, the National Lawyers Guild has released  a report based on last year's Republican National Convention in Tampa, Fla., and Democratic National Convention in Charlotte, N.C., highlighting First and Fourth Amendment violations imported with this sort of event policing. The report notes:

The security measures taken at the RNC and DNC are in keeping with the last fifteen years of government planning for national and international political and economic meetings, which have been defined by massive expenditures on weapons and outside personnel, restrictive event permits and ordinances that limit protest activities, and the vilification of constitutionally protected speech and assembly through media manipulation and aggressive police tactics.

In both Tampa and Charlotte, an equally extensive security apparatus was put in place to control dissent. Both cities received $50 million in federal funds to beef up security, and both brought in more than 3,000 officers from outside police departments. In Charlotte, the city manager declared the DNC an “extraordinary event,” which permitted the marking off of a large part of the city in which police officers have extended authority to search and possibly arrest individuals for carrying items like hammers or glass bottles, or masking their faces. Meanwhile, Tampa introduced an “event zone” for the RNC (originally called a “clean zone” before public backlash forced a nomenclature rethink), where similar objects are banned and police authorities are extended.

The establishment of (ever-Orwellian) “free speech zones” for DNC and RNC rallies served as rankling proof that, as a base line, speech is far from free during NSSEs; you have to go to special, cordoned-off areas for that. As the NLG points out, "In advance of the upcoming presidential inauguration, the National Park Service has revoked the permit for a major demonstration at Freedom Plaza, limiting the protesters to a 10-yard wide strip of sidewalk."

The report authors express concern that the heavy-handed police apparatus has had a "chilling effect on free speech and assembly contributing to poor attendance at convention protests despite widespread dissatisfaction with both political parties." I'd suggest that an Occupy-inspired lack of interest in engaging with mainstream political fulcrums may have also partly accounted for relatively low protest numbers, but certainly heavy-handed ordinances and militarized police forces serve to intimidate and deter protesters.

Interestingly, the report draws on the media tactics employed by city officials ahead of NSSEs to legitimize large expenditures and protest ordinances, which regularly stay in place long after the NSSE has packed up -- the DNC left Charlotte with an anti-protest ordinance on the city’s books, which allows a city manager to invoke sweeping powers that tighten permitting, suspend probable cause for searches, and ban the possession of a host of household items. Of the tired "anarchists are coming!" scare tactic, the NLG notes:

When justifying enormous security expenditures, large numbers of police, and strict event zone ordinances, authorities often refer to the need to defend NSSEs against the threat of so-called “violent anarchists.” Prior to almost every large political event, police and local politicians rationalize these measures by warning of anarchist plans to disrupt the event through violence. This strategy, based on practices of intelligence gathering and police training that rely on amorphous categories such as "anarchist,” produces a “threat amplification” spiral that consistently leads to sweeping police repression. However, these intelligence “warnings” are not simply the unfortunate byproducts of a flawed practice, but rather the desired outcome of a multi-pronged strategy of maintaining control over the populace.

NLG executive director Heidi Boghosian said in a statement that “all too often at National Special Security Events, we see law enforcement vilify protesters and trample the First Amendment in an effort to justify massive security spending and lasting crackdowns,” adding that her organization's report serves as a "primer on the evolution of police tactics at NSSEs, which is essential to understanding the show of force that will usher in this president’s second term.”

NSSEs are spaces that reveal all too visibly -- with riot gear, weapons and tanks -- that dissenters are prefigured by the authorities as combat enemies. Little wonder then that the range of recommendations offered by the NLG could be folded into one: This should stop.