"The last American bombshell," who swore she'd never do a nude scene, is undressed by Esquire's wild imagination 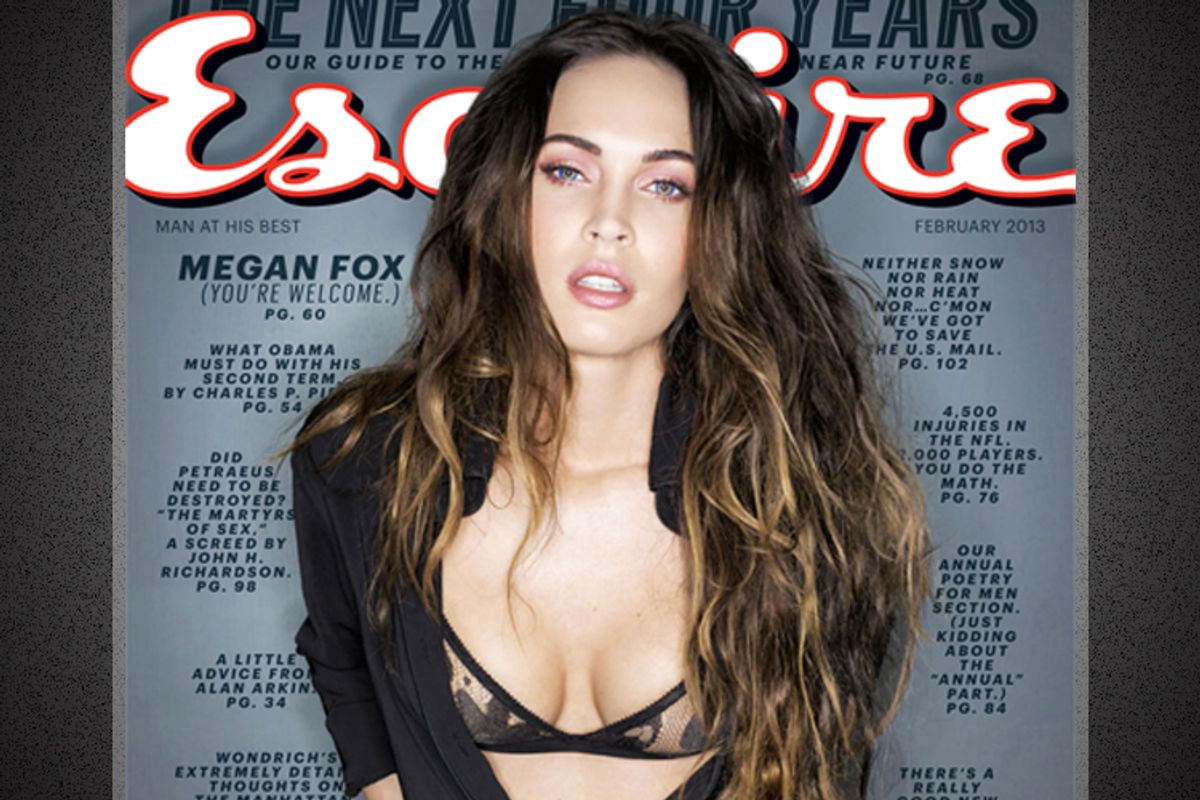 Megan Fox is an actress who, after getting her start in silly action films like "Transformers" and "Jonah Hex," has tried to branch out. In 2012, she was a supporting player in two serious-minded comedies with a melancholy edge, "Friends With Kids" and "This is 40." She told the New York Times Magazine's Lynn Hirschberg in 2009, “I do live in a glass box. And I am on display for men to pay to look at me. And that bothers me. I don’t want to live that character.” She claimed that her body parts were the only thing that were hers, and thus she'd never do a nude scene on film.

That article hinged on Fox's rather unsuccessful attempts to define herself as something other than a sex-bomb starlet, an attempt that, for whatever reason but not for lack of trying, has evidently been unsuccessful. Fox is profiled in the new issue of Esquire. She strips down for the camera as the author waxes rhapsodic: The actress is "a screen saver on a teenage boy's laptop, a middle-aged lawyer's shower fantasy, a sexual prop used to sell movies and jeans."

And magazines! ("Megan Speaks," promises the cover, if you swipe your smartphone over her exposed body.)

Here is a list of women that Stephen Marche criticizes after praising "the symmetry of [Fox's] face": Lena Dunham, Adele, Lady Gaga, Amy Adams (for being "plain"); Jessica Alba and Lindsay Lohan (for unseriousness); Scarlett Johansson (for perceived pretension); Charlize Theron, Halle Berry, and Tina Fey (for trying too hard to hide "unfettered sexual beauty"). Not so in the case of Megan Fox, akin in Marche's telling to "figures of hugely fecund women dropped all over Europe tens of thousands of years ago."

It might just be that if Marche started listening to Fox, he'd find her as pretentious as he finds Johansson, or whatever; the actress caused a sensation in the Times back in 2009 not for revelations of her body but of her keen wit and acute knowledge of the game of Hollywood stardom. In this case, "playing the game" means posing for some cheesecake photos and dropping crumbs for the interviewer to follow; Fox cites a belief in aliens and leprechauns, an obsession with the Book of Revelation. The only follow-up question asked is from Marche to himself: Can Megan Fox be commodified, boxed and sold?

The answer comes in the penultimate paragraph: "Megan Fox, the last American bombshell, guides me up the stairs."