Russian adoption ban wrenching for families in US 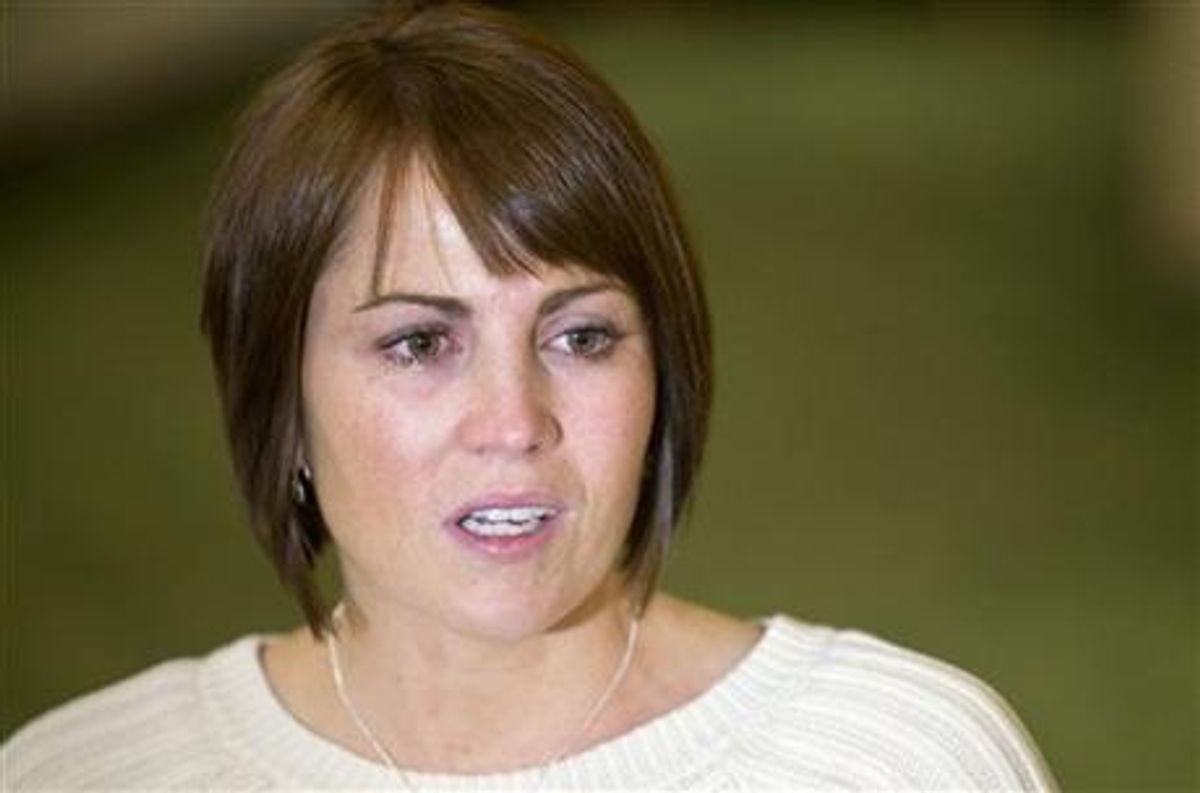 MOSCOW (AP) — From their faraway homes in the American West, the two couples made repeated missions of love to Moscow, each seeking to adopt children with Down syndrome.

Now, with court approval at last in hand, a political squabble with a trace of Cold War friction has derailed those plans, leaving them in anxious limbo.

Brian Preece had been hoping his life as an adoptive father would have started by now, perhaps with a special treat for his 4 1/2-year-old boy.

"I was planning on going swimming with my son," he said. But instead of splashing around in a pool in Nampa, Idaho, Preece and his wife, Rebecca, sat in a Moscow hotel lobby this week, at loose ends after officials refused to turn over the boy even though a court approved the adoption last year.

With them was Jeana Bonner of South Jordan, Utah, on her fourth trip to Russia as part of intensive efforts by her and her husband, Wayne, to adopt a 5-year-old girl.

"There is no process set up, there is no information specific to our case," said Bonner, who left her husband behind in Utah to care for their two biological daughters, including one with Down syndrome.

The Bonners and Preeces have run into a legal cul-de-sac. After their adoptions received court approval, they expected to wait nervously through a 30-day period in which the ruling can be challenged, then get the decree allowing them to take custody of the children, obtain needed documents and take them home.

But during those 30 days, Russia enacted a law banning adoptions by Americans. The ban was rushed through parliament and sped to President Vladimir Putin's desk in less than 10 days in a surge of retaliatory anger over a new U.S. law calling for sanctions on Russians identified as human-rights violators.

The hasty enactment left many questions unresolved. Although Putin spokesman Dmitry Peskov has said that adoptions already approved by courts could go ahead, the Preeces said Tuesday they were told that the ban has left a legal vacuum — with no mechanism for issuing the decree that finalizes the case.

"The process used to be all streamlined and fairly straightforward. Now there's no instructions," said Rebecca Preece, on an emotional knife-edge as months of visits and paperwork hit a roadblock.

"He understands that we're coming for him," she said of the boy they hope to adopt. "We were able to visit him ... and he talked about going in a car with us, in an airplane.

"He knows. He calls us 'mama' and 'papa'," she said, on the verge of tears. "We've come for him three times and three times we've had to leave."

A spokesman for Russia's Supreme Court, Pavel Odintsov, told The Associated Press on Wednesday that the high court is seeking information that would allow it to make recommendations on establishing a legal framework for resolving the dilemma.

It is unclear when that clarity might come, but "we are not talking about months; possibly a couple of weeks," he said.

Now, Preece said, the question is whether to stick around in Moscow to see the process through and hope things don't go further awry, or go home and wait it out in Idaho.

The Preeces have three other children, including one with Down syndrome. The plan now is for Brian to go home this weekend, to attend to the couple's fireplace business.

Jeana Bonner, in a telephone interview before leaving Utah, said she and her husband have felt so enriched by the experience of raising their own daughter with Down syndrome that they wanted to adopt a child who also had the condition.

"It was something we felt we could do — we had experience, we had the resources and support," she said.

During three previous trips to Russia, dating back to last June, the Bonners have met seven times with the girl they hope will be their daughter.

"She's an amazing little girl, very active, very bright," Jeana Bonner said. "It's very apparent that the staff at her orphanage take very good care of the children ... But nothing can replace a family. We plan to take care of her for the long haul."

The Bonners and Preeces are among 52 U.S. families who'd won court approval for their adoptions before the ban was signed. Hundreds more families — perhaps 1,500 in all — were in some earlier phase of pursuing an adoption from Russia, and they too are in limbo.

Many listened in on a State Department conference call last week, and have been seeking assistance from their congressional representatives. But definitive answers are elusive.

"The information we have is very minimal — it's frustrating," said Joe Carrasquillo of Romeoville, Ill.

He and his wife, Jenna — both high school special education teachers — traveled to Russia in December to meet two boys they hope to adopt, and were dismayed as the ban began speeding through Parliament at the end of their visit.

"It was a real rough moment for us," Carrasquillo said in a telephone interview.

But his voice brightened as he recalled three straight days of meeting the two boys — one 3 1/2 and the other almost 2 — who live at different orphanages in the southern city of Rostov-on-Don.

"We know both boys would be a great addition to our family," Carrasquillo said. "You feel a bond to them already even after one visit, and every day you got a little closer."

He and his wife, who committed themselves to adoption even before they married, won't be looking to another country until they get a clear answer from Russia.

"We don't want to consider another option until we know this option is closed to us," said Carrasquillo.

Some families caught in the diplomatic limbo have decided not to speak publicly about their situation for fear there might be negative repercussions.

But Wendy Rella, a hair stylist from Bedford, N.H., said she and her husband, Peter, are taking an outspoken approach. They have a 4-year-old daughter, Alina, whom they adopted from Russia in 2009, and they were back in Russia last month visiting a 10-month-old boy they hope to add to their family.

News of the ban broke soon after they'd completed their 20-hour trip to Vladivostock, on Russia's Pacific Coast, to visit the boy.

Since returning home, Rella has been writing to her U.S. senators, sharing her story with local media, and following the news in Russia — including a march Sunday in Moscow protesting the adoption ban.

"If we stay quiet, they won't know who we are," Rella said. "I'm afraid we're going to be forgotten about. I don't want people to stop marching, to stop talking about it ... I keep thinking we are going to get him home."

Like the Rellas, Kurt and Ann Suhs are hoping to adopt a sibling for a child they previously adopted from Russia — in their case, it's 7-year-old Ben.

Kurt Suhs, who works for an insurance company in the Atlanta area, said his grandmother was Russian. So there's an element of heritage at work as they try to expand their family even at costs that typically exceed $50,000 per adoption from Russia,

"Russians are good people," Suhs said. "You just have to hope people put aside the politics and do the right thing for the kids."

The immediate cause of Russia's ban was to retaliate for the new U.S. law targeting Russians accused of human rights abuses. But the ban also reflects long-brewing resentment in Russia over the 60,000 Russian children who have been adopted by Americans in the past two decades, 19 of whom have died.

UNICEF estimates there are about 740,000 children not in parental custody in Russia — and 105,000 live in orphanages. Russia has been trying to increase domestic adoptions and says about 18,000 Russians are on the waiting list to adopt a child.

The number of domestic adoptions fell in recent years: Russians in 2011 adopted 7,416 children, a drop of more than 2,100 from 2007, according to Education Ministry figures published in the newspaper Komsomolskaya Pravda.

The same report showed that Americans adopted 956 Russian children in 2011, 89 of them classified as disabled.

Chuck Johnson of the Virginia-based National Council for Adoption has commended Russia for trying to improve its child-welfare system, and was elated in November when the U.S. and Russia completed a long-in-the-works adoption treaty. Now, he's dismayed at the ban and its emotional toll on the affected U.S. families.

"The way the information is being given out is really cruel," he said. "This has been a very discouraging and bitter outcome."

For the Bonners, however, there's no option but to persevere — especially in light of bureaucratic setbacks last year that twice made them think their adoption quest was doomed.

"Two times it looked like there was no way it was going to work out, and we grieved through that," Jeana Bonner said. "It just hurts and is so painful.

"This time we're going to be a hopeful as possible. We're not going to give up until we've exhausted every possible avenue."