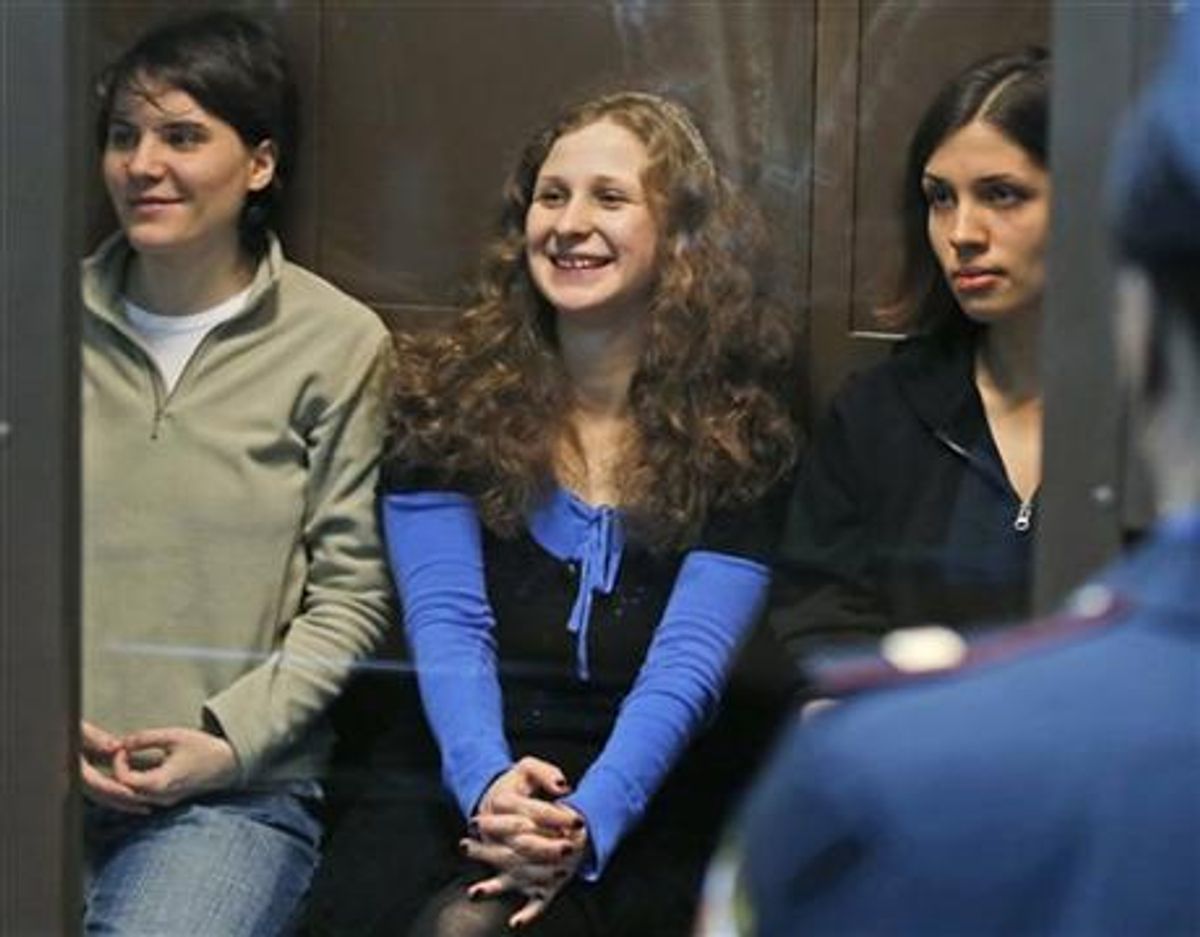 BEREZNIKI, Russia (AP) — A Russian court on Wednesday turned down an attempt by an imprisoned Pussy Riot band member to defer serving her sentence for hooliganism until her preschool son becomes a teenager.

Maria Alekhina asked the court in Berezniki, a Urals Mountain city near her prison, to let her serve the rest of her two-year sentence after her 5-year-old son turns 14. She argued that separation from her young child now would do irreparable psychological damage to him.

Alekhina and two other female members of the punk band were convicted last year of hooliganism motivated by religious hatred for an anti-Vladimir Putin protest in Russia's main cathedral. One of the women has had her sentence suspended on appeal.

Judge Galina Yefremova rejected Alekhina's petition, saying the court that sentenced her had already taken the child's existence into account.

Alekhina told the court Wednesday that while she wanted her sentence deferred, she still refused to plead guilty.

"No one will force me to say I'm guilty — I have nothing to repent for," she said.

Her son, Filipp, is going through his formative years and cannot be without her, she said.

"I'm in a situation where I have to prove here that my son needs me, which is obvious," she said.

But the prosecutor argued against the deferral, saying Alekhina had violated prison rules by doing things like not getting up when a prison guard called to awaken her.

Several dozen supporters and journalists gathered Wednesday outside the Berezniki court building, which was guarded by riot police.

Sentence deferrals are uncommon in Russia. In fact, there are several Russian prison colonies for female convicts with small children who raise their babies behind bars.

Yet deferrals do occur. In the most publicized precedent, a woman who drove her car onto a sidewalk, killing one woman and leaving another confined to a wheelchair, had her sentence deferred in 2010 because she had just had a baby. The woman, who did not admit guilt or apologize to the families of the victims, turned out to be a daughter of a senior local official, sparking suspicions of selective justice.

The Pussy Riot members performed a "punk prayer" at Moscow's Christ the Savior Cathedral, pleading with the Virgin Mary for deliverance from Putin, who was then prime minister but on the verge of being elected to a third term as president.

Yekaterina Samutsevich, another band member, had her sentence suspended in October after she argued that she was thrown out by guards before she could take part in the church stunt.