A part-time student shot an administrator at a downtown St. Louis school before turning the gun on himself 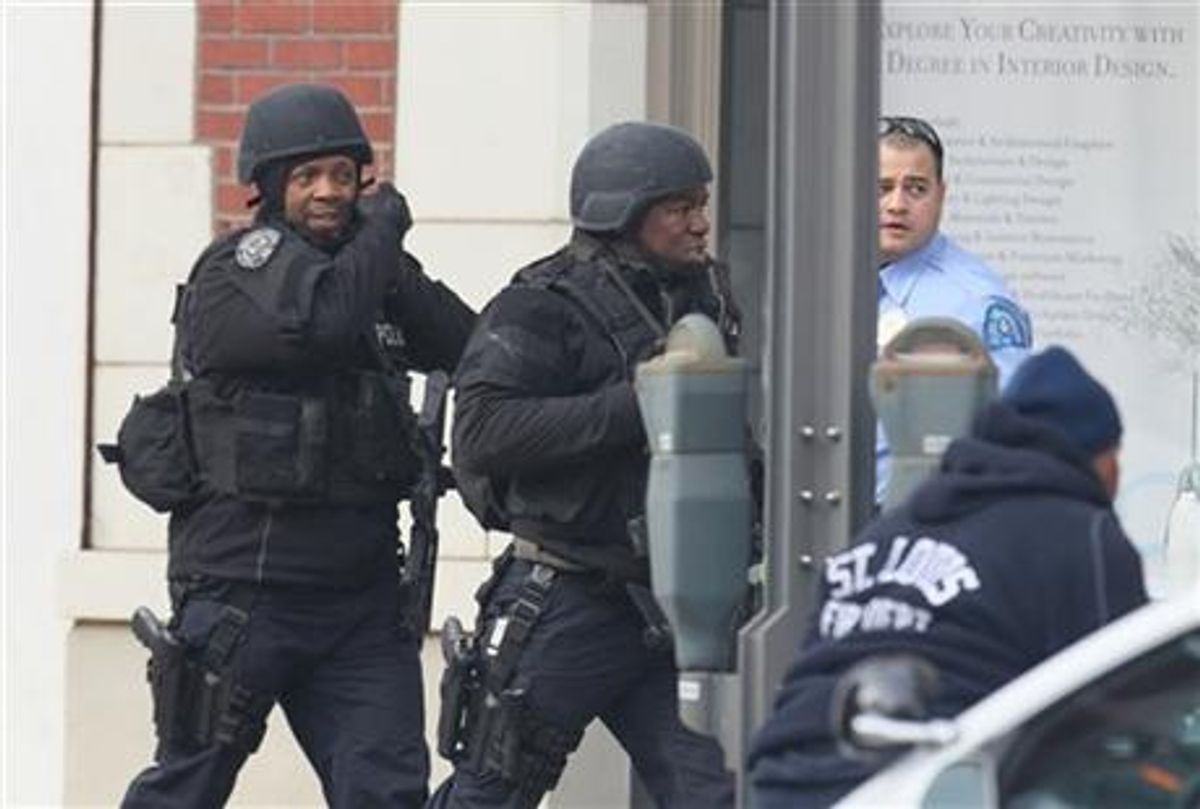 ST. LOUIS (AP) — A part-time student shot a longtime administrator in the chest at a downtown St. Louis business school before turning the gun on himself early Tuesday, sparking a "chaotic scene" with police swarming the building and panicked students fleeing, police said.

Both survived and were transported to hospitals where they underwent surgeries Tuesday. Police Chief Sam Dotson said he was optimistic both would survive. Hospital officials declined Tuesday evening to comment on the men's conditions and a message left with St. Louis police was not returned.

Police did not identify either man, but Dotson said the administrator was a longtime employee in his late 40s. He said the suspect had been attending Stevens Institute of Business & Arts off and on for four years and had no history of threats or violence.

Dotson said police arrived to find a "chaotic" scene with many students running out of the five-story historic building in the downtown loft district of St. Louis. About 40 to 50 people were in the building when gunfire broke out, and police evacuated them before starting a floor-by-floor search with tactical teams and dogs.

They found the administrator, who had been shot in his fourth-floor office, near an elevator, Dotson said. Officers found the suspect in a stairwell between the third and fourth floors, he said. Police found a handgun, but a spokeswoman wasn't sure where.

The motive wasn't clear, but Dotson said the shooter apparently sought out the victim.

"This did not appear to be random," Dotson said. "It appeared to be targeted."

Britanee Jones, 24, hid under a desk while her classmates ducked into closets or ran out of the building. Her mother, Angae Lowery, raced to the school to make sure her daughter was safe.

"She sent a text message and said a gunman was in the building," Lowery said. "She saw him (the gunman) go by the classroom."

When Jones emerged from the building about an hour-and-a-half after the shooting, her mother and another relative greeted her with shrieks of joy. Jones declined interview requests, saying only that she was in a fashion management class when the shooting began.

"I'm so happy to see her come out," Lowery said. "I'm relieved. It was really frightening."

The school has about 180 students in programs including business administration, tourism and hospitality, paralegal studies, fashion, and retail and interior design.

Dotson said police arrived within one minute of getting a call about the shooting and used an "active shooter" protocol developed after a 2010 shooting spree in which a man killed four people and wounded five others at ABB Inc., a transformer manufacturing firm.

Officers followed the protocol to a tee, Dotson said, hurriedly going inside, getting everyone out, and using tactical teams and dogs to sweep the building in search of the shooter or shooters.

Several people left messages on the school's Facebook page expressing dismay that a shooting happened there, and expressing prayers for a quick recovery for the administrator. The school posted on the Facebook page that it would be closed until 8 a.m. Jan. 22.

Several messages left Tuesday with the school's telephone operator and the college's president, Cynthia Musterman, were not immediately returned.