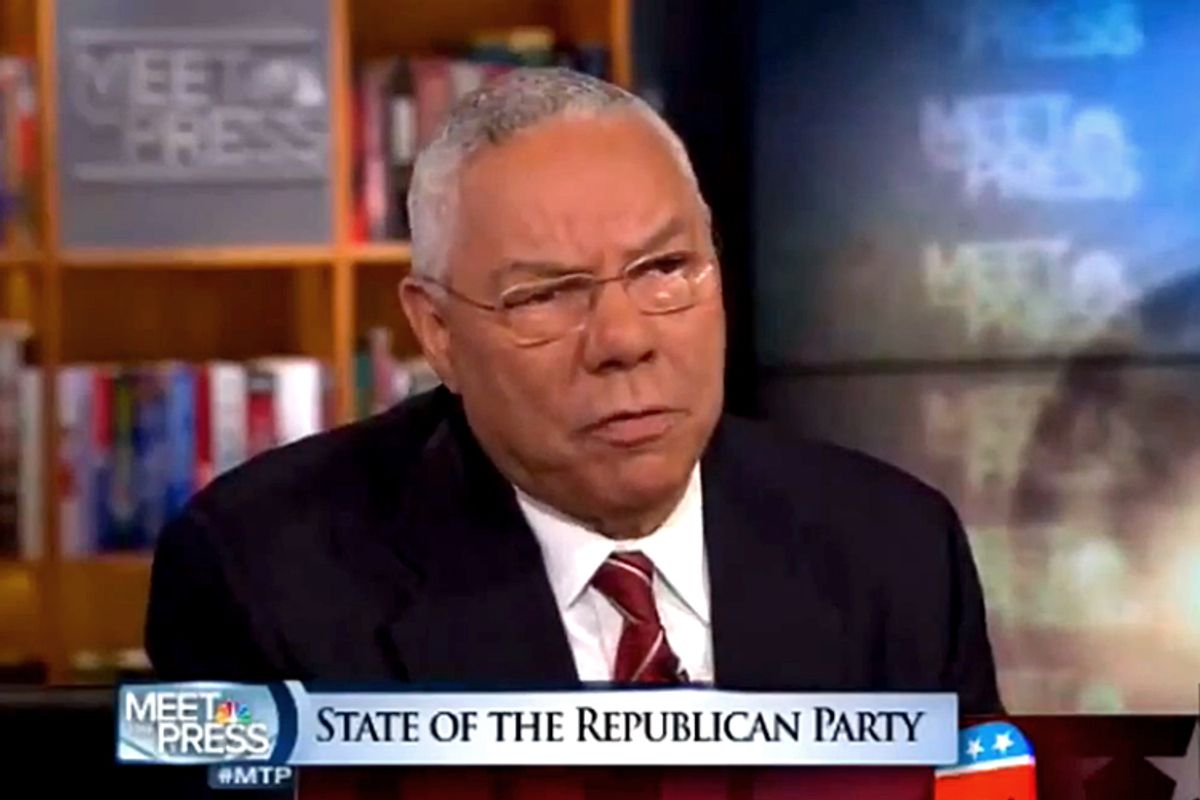 The folks at FreedomWorks, last seen in the media being marched out of their own offices by an armed guard, only to march back in after a plutocrat benefactor paid an $8 million ransom to Dick Armey, found a black Republican to kick Gen. Colin Powell out of his own party Tuesday.

Stacy Washington doesn’t seem to have brought along an armed guard to help her escort Powell out of his party. But apparently motivated by his majestic denunciation of his party’s four-year freakout over President Obama on “Meet the Press” last Sunday, Washington intoned on the front page of the FreedomWorks site Tuesday: “It's with considerable dismay that I pronounce him to be, well -- no longer a Republican!” Why? He “holds far too many positions that place him squarely in the Democratic Party's base to seriously be considered a Republican.”

In case you missed Powell’s remarks Sunday, he identified “a dark vein of intolerance in some parts” of his own party. He came with facts.

What do I mean by that? I mean by that is they still sort of look down on minorities. How can I evidence that? When I see a former governor [Sarah Palin] say that the president is shuckin' and jivin' -- that's a racial-era slave term. When I see another former governor [John Sununu] after the president's first debate where he didn't do well, says that the president was lazy. He didn't say he was slow, he was tired, he didn't do well; he said he was lazy. Now, it may not mean anything to most Americans, but to those of us who are African-Americans, the second word is shiftless, and then there's a third word that goes along with it. The birther, the whole birther movement. Why do senior Republican leaders tolerate this kind of discussion within the party?

The usual suspects on the right went nuts. Fox’s “The Five” called Powell “unhinged.” Laura Ingraham called him a “weapon of mass destruction,” and Fox’s Megyn Kelly remarked “Whoa, with friends like that in the Republican Party, who needs enemies?" But at least Kelly let him stay in his own party; FreedomWorks’ Washington won’t allow it. His ultimate sin: “castigating the party using the very tired but effective cudgel of race. Tossing the race card is the purview of liberals,” she says, so that makes Powell a liberal.

Even some mainstream media folks like the Washington Post’s Chris Cilizza raised an eyebrow at Powell’s claim, calling it “a very serious accusation that Republicans have long dismissed as an unfair charge leveled primarily by Democrats.” And after a tortuous look at poll data, Cilizza concludes that the overwhelming number of Republicans who believe blacks are Democrats because they are “government dependents/wanted something for nothing/welfare,” amazingly, “should not be directly equated to racial intolerance.” But Cilizza correctly observed that no major party figures had come forward either to refute Powell’s claim or to endorse it as at least worthy of discussion.

At this point, the Republican Party doesn’t deserve someone like Powell. It’s pathetic how alone he is in calling out his friends on either their racism, or their tolerance for it. I’ve written many times: Birtherism wouldn’t have become a potent force if people like John Boehner or Mitt Romney had spoken out against it. Instead Boehner insisted it wasn’t his job to tell people what to think, and Romney made jokes about nobody needing to see his birth certificate, while embracing the carnival barker Donald Trump.

But Powell has spent his life as a Republican and he’s entitled to remain one, to fight for the soul of his party from inside of it. None of the grifters or poseurs at FreedomWorks is entitled to read Powell out of it.