Can capitalism and democracy coexist? 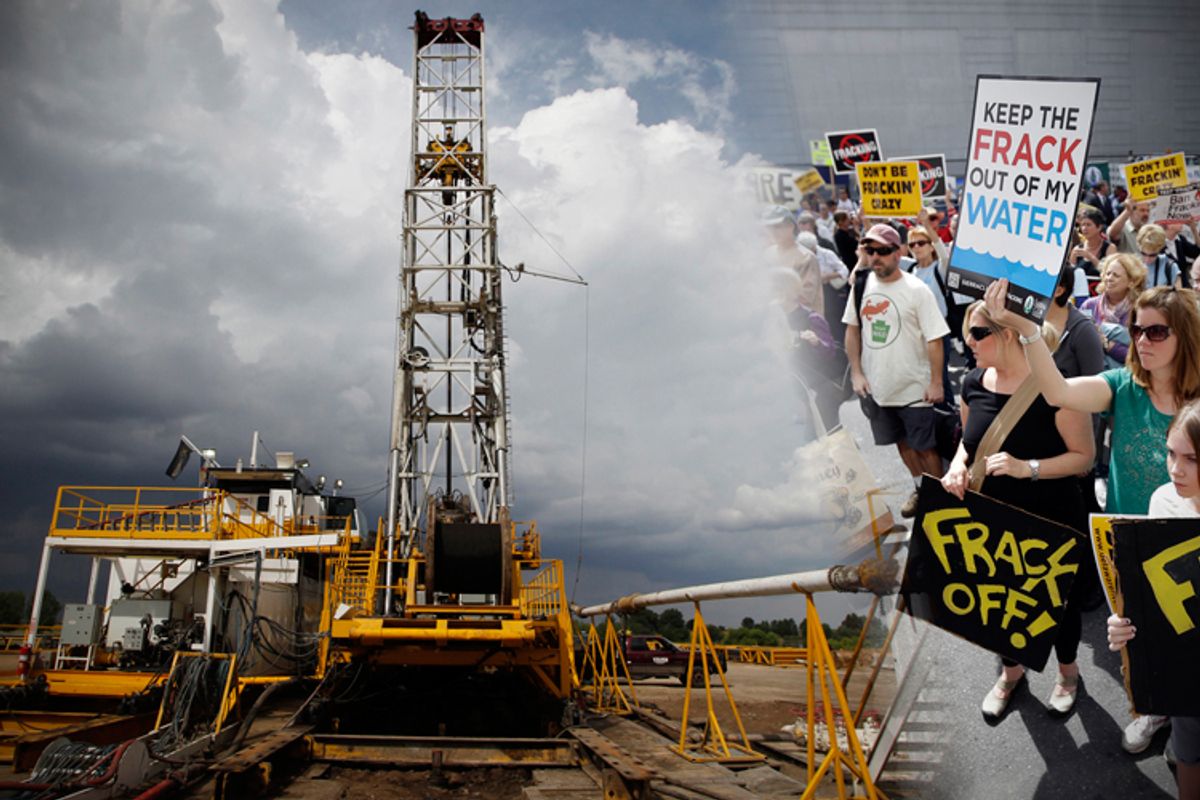 If you've ever pondered the issues surrounding the tenuous relationship between democracy and capitalism, most likely, you've considered them as both foreign and abstract (much as the elite media often does). Are, say, China and Russia authoritarian, capitalist or both at the same time? Can Middle Eastern countries use their sovereign wealth funds to build prosperous free-market economies while those nations also deny their citizens basic freedoms? Do transnational corporations that operate under the aegis of repressive regimes prove that capitalism can exist wholly without democracy?

While these are certainly significant questions, they obscure the fact that the tension between democracy and capitalism is also intensifying here at home. For instance, taxpayer-sponsored bailouts of -- and direct subsidies to -- particular politically connected industries effectively employ our democracy's public power to undermine capitalism's notion of "creative destruction." Regulatory and tax-code loopholes for other industries do much the same. Meanwhile, the landmark Citizens United decision accelerates the trend whereby capitalism's winners are able to wield disproportionate political power, effectively undermining democracy's egalitarian notions of "one person, one vote."

But in a week that saw the Associated Press expose the all-too-corrupt relationship between regulators and the natural gas industry, perhaps the best way to understand the struggle between democracy and capitalism is to consider it through the microcosm of energy development. In the intensifying fight over whether local communities can regulate hydraulic fracturing ("fracking") in their midst, the battle between the public's political rights and the private profit motive is coming down to a simple question: Can capitalism and democracy even coexist?

If that query itself sounds extreme, consider the juxtaposition of the new Matt Damon film "Promised Land" with the stunningly honest declaration this month by a fossil fuel executive.

The film's dramatic fulcrum is the assumption that towns still retain the ultimate power to vote to prevent fracking from happening within city limits. But as National Public Radio reports, "In the real world, there's almost never a vote." That's thanks to the legislative power of a natural gas industry whose views on democracy were perfectly summarized in the New York Times by industry executive John C. Holko.

“Why should I put money in the ground if any one of the towns can say no at the next town meeting?” Holko told the Times in a piece about whether New York Gov. Andrew Cuomo, D, will do the bidding of the industry by overriding local voters' right to regulate oil and gas drilling. "The issue of home rule is the demise of the industry.”

It doesn't get any more stark than that, does it? At a moment when the ascendant natural gas industry is gaining ever-more political and economic power, Holko is asserting that municipalities' age-old democratic rights to regulate internal commerce ("home rule") can no longer peacefully coexist with fossil fuel corporations.

The insinuation, of course, is that those democratic rights should now be summarily abrogated, which is exactly what the fossil fuel industry is right now trying to do.

In Pennsylvania, the same state whose industry has publicly acknowledged the health risks of drilling saw its own 2012 Legislature preempt local communities from regulating fracking. In New York, Cuomo and his Legislature will ultimately decide whether to allow fracking in the state -- and, along with the courts, whether to follow industry demands and bar local communities from passing their own drilling ordinances. Meanwhile, in Colorado, where an overwhelming and bipartisan vote banned fracking in Longmont, the industry is now suing in court to definitively eliminate local voters' right to regulate fracking in their communities. Fossil fuel firms have a powerful ally in Democratic Gov. John Hickenlooper, who endorsed such lawsuits after raking in $76,000 in campaign contributions from those companies.

Noting that communities that have banned fracking still use natural gas, Slate’s Adam Briggle has derided an undeniable strain of NIMBY-ism in some of the local bans. However, as ugly as NIMBY-ism can be, even it, unto itself, is a proxy for the all-important battle between democracy and capitalism. NIMBY-ism, after all, is all about whether a city is allowed to use democracy to limit certain forms of capitalism inside the community.

Additionally, in the fracking fight, there are other, more nuanced questions being raised, the most significant of which is what kind of democratic forces are most appropriate for regulating capitalism, the local or the statewide? Is it best for a relatively small handful of elected representatives and their non-elected appointees in regulatory agencies to dictate drilling policy to local communities? Or is it better for the people who will actually be affected by drilling to decide on their own what they are most comfortable permitting?

Anti-fracking activists say the latter, arguing that municipalities are in the best position to know what is right for them. The industry argues the opposite, probably for two unstated reasons: 1) it is easier to convince a small, physically isolated set of lawmakers to support a particular policy if they themselves do not have to personally face the consequences of such a policy, and 2) it's much simpler to buy off a small group of all-powerful lawmakers and industry-connected regulators than to wage town-by-town campaigns.

Tactically, the industry's calculations are accurate on both counts.

When it comes to the consequences of drilling, human health consequences could, indeed, be severe. The Environmental Protection Agency, Duke University and even some fossil fuel industry groups have provided ample evidence that fracking could have serious human health ramifications for local communities -- ramifications that legislators and regulators in distant state capitals don't have to worry about for themselves or their families.

As evidenced by the Associated Press's revelations this week, those distant legislators and regulators are all too often willing to ignore problems that aren't affecting them personally.

Likewise, it's a truism that the fewer policy makers there are, the simpler it is to influence public policy. It is also correct, as Hickenlooper recently told an approving group of energy executives, that letting each community regulate drilling could create "an intensely balkanized, patchwork quilt" of different laws and force natural gas firms to engage voters town by town to try to get its way.

But, then, that's it right there: At the root, Hickenlooper's talking point is capitalism arguing against democracy. More specifically, it is capitalism (gas companies and their puppet politicians) arguing that democracy (having to convince many different sets of voters to support a policy) is wholly unacceptable.

Is that really true: Is too much democracy a bad thing for capitalism? It’s one of the big questions of this moment, and opinions will certainly differ on the right answer to it depending on the particular issue at hand. But in order for those opinions to differ we must be more aware that the question is being asked not just in foreign countries or academia. Whether in debates over local gun laws, gambling regulation, drug policy or energy development, it is being asked in so many different ways right in our own backyard.