Why do we keep getting suckered by stories like Manti Te'o?

Updated: On the heels of the Notre Dame scandal, guidelines for journalists reporting on inspirational stories 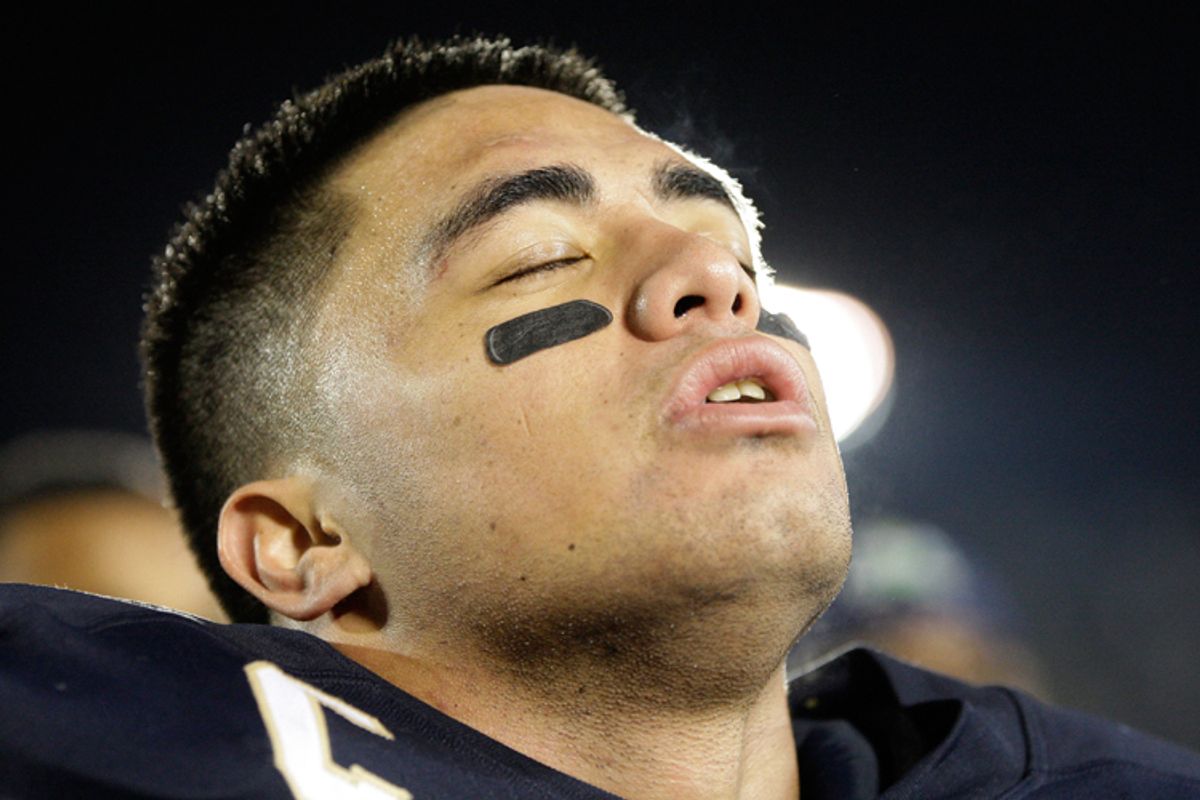 I would like to propose the following rule for journalists: When presented with a feel-good story on a sports-related subject, you should presume the story is fabricated, unless persuaded by clear and convincing evidence to the contrary.

This is just one of the many lessons to be extracted from the increasingly bizarre story of Manti Te’o, the star football player whose heart-rending narrative about the simultaneous death of his grandmother and his girlfriend turned out to have been invented out of whole cyber-cloth.

(Another lesson is that administrators at Notre Dame are far more likely to weep over the imaginary death of a nonexistent girl than they are to shed tears for a real girl who actually committed suicide, after allegedly being sexually assaulted by one of Teo’s teammates.)

Rather than follow such a rule, powerful and research-rich media outlets such as Sports Illustrated, NBC and ESPN swallowed the fantasy of the dying girlfriend whole, without bothering to do the cursory fact-checking (a couple of hours on Google and Lexis would have sufficed) that would have destroyed this, in retrospect, all too obviously pat tale. [Update: Sports Illustrated has published Pete Thamel’s description of his fact checking procedure, which consisted of trying to verify any of Te’o’s enormously detailed account regarding the life and death of a non-existent person, finding (of course) that it was completely impossible to do so, and then running the story anyway.]

The Te’o saga is just the weirdest version of a story that gets played out again and again, because of our culture’s puerile obsession with athletes as role models. Here’s another straightforward rule: That people are very good at winning football games, or bicycle races, or golf tournaments, doesn’t tell you anything about those people, other than that they’re good at those activities.

Being good at sports doesn’t say anything about their “character.” It doesn’t make them people to emulate in any way (unless you’re trying to win football games, etc.). It doesn’t make them otherwise interesting, or noteworthy, or admirable, and to assume it does is lazy and stupid and unprofessional, and will eventually get you in trouble when your Lifetime movie of the week turns out to be a bunch of bullshit that the editor of a high school newspaper could have discovered easily enough.

Speaking of bullshit, professional liar Lance Armstrong has gone on professional tear-jerker Oprah Winfrey’s network to tell everyone something that everybody who hadn’t willfully blinded themselves to the facts figured out long ago, which is that Lance Armstrong cheated his way to a bunch of Tour de France titles.

This isn’t complicated stuff.  There is not the slightest question that performance-enhancing drugs give bicyclists a huge competitive advantage.  It had been equally well established that use of PEDs was rampant among the very best riders in the world at the same time that Armstrong was winning the biggest race in the world seven years in a row. Taken together, these two facts mean either that Lance Armstrong, Inspirational Cancer Survivor, was a transcendant Superman, who was sent into our midst to demonstrate that anything can be overcome with enough effort, and that hope really does spring eternal, or that he was cheating and lying his way to fame and fortune for years on end, and slandering lots of former teammates and others in the process. Guess which story won out until enough people were forced to testify under oath?

A third rule: Any person or institution that has achieved extraordinary levels of worldly success, while at the same time claiming to maintain higher ethical standards than his or its competitors, is running what grifters call the long con.

Don’t fall for it.