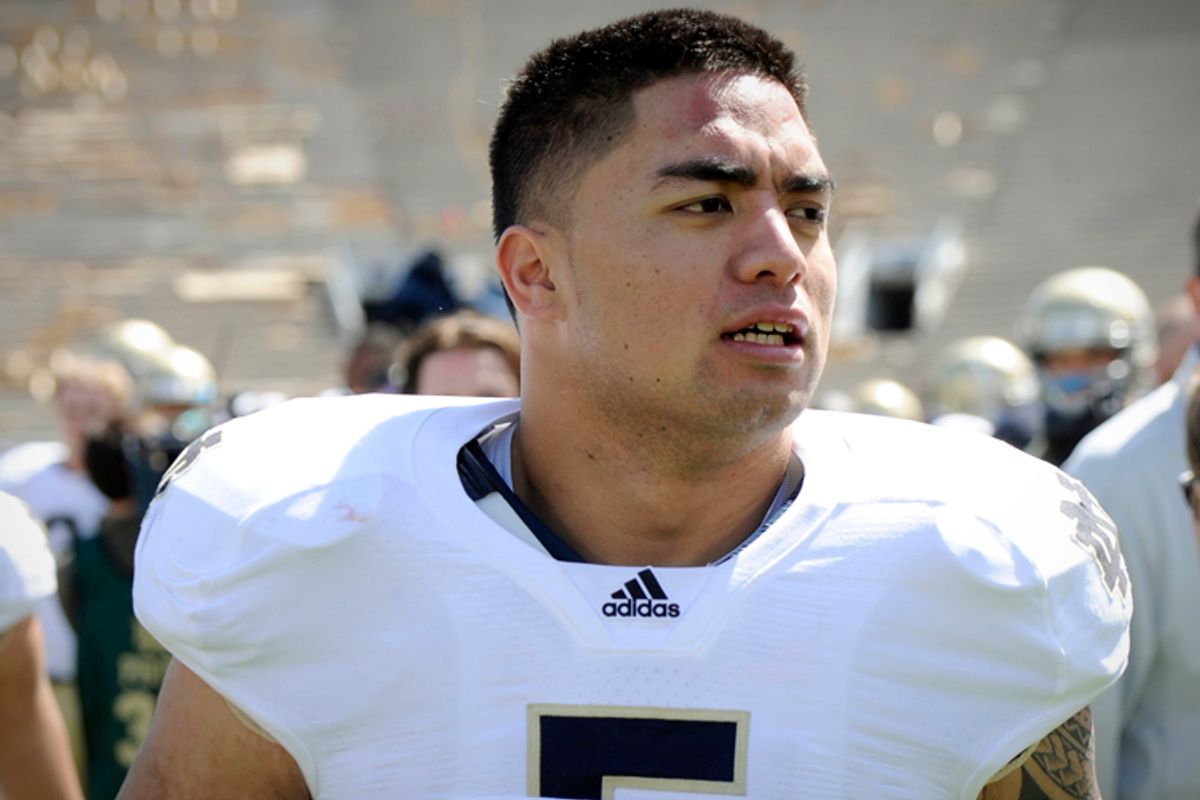 The handful of people who immediately took note of the contrast in the attention — both by the press and by the university — are absolutely right to be angry. But no one should be surprised.

We don't know everything about the Te'o saga yet, but there is probably only one fake dead girlfriend mythologized by the sports media, the existence of "Catfish"-ing as a verb notwithstanding. Whereas there are legions of stories of sexual violence against women and men by star athletes and staff, who can reliably count on the impunity offered by fandom. Confronting the former is a little embarrassing: The public equivalent of loving too much, the allure of a heartwarming story everyone wanted to believe. Confronting the latter requires uglier, more difficult self-examination, and accepting collective responsibility costs more.

It matters, too, how we can talk about each story. Some Manti Te'o Twitter jokes were instant classics; no one decent can make jokes about a girl who killed herself after being told, “Don’t do anything you would regret," and “Messing with Notre Dame football is a bad idea," according to Melinda Henneberger's reporting. Henneberger, a Notre Dame alum, wrote in the Washington Post in early December that she won't be cheering for the team. "As a thought exercise, how many predators would have to be on the team before you’d no longer feel like cheering?" she wrote. (She also said, "There are plenty of good guys on the team, too, I’m repeatedly told, And oh, that Manti Te’o is inspiring. I don’t doubt it." Very few did.) It's easier to just change the subject and not think about whether there is something endemic to football culture that enables sexual entitlement with the reasonable assumption of getting away with it.

We all have heard by now how denial and institutional culture contributed to Jerry Sandusky's ability to continue assaulting young boys for years, under cover of the Penn State football program. But once that was exposed, it was rightly considered an unambiguous evil. But the sexual assault of women can and is often explained away — including the Notre Dame donor who justified his continued support to Henneberger by saying that Seeberg had been sexually aggressive, that "she was all over the boy." In other words, it's not just the players who are banding together around their brothers whether they're rapists or not; it's the adults around them who are turning a blind eye because they consider other things are more important. And they're willing to believe anything except that these nice boys can be rapists.

Dave Zirin, who has long called for the Notre Dame football program to be shut down as irredeemably corrupt, pointed out that the university had hired a private investigator for the Te'o case but not the numerous other allegations of wrongdoing by players. Zirin said of the school's athletic director, "It says so much that Te’o’s bizarre soap opera has moved [Jack] Swarbrick to openly weeping but he hasn’t spared one tear, let alone held one press conference, for Lizzy Seeberg … The problem at Notre Dame is not just football players without a compass; it’s the adults without a conscience." We live in a country that officially condemns rape and sexual assault but when confronted with the real possibility of it, rarely strays from denial and excuses. That's the biggest scam of all.