The 23 executive orders that weren’t 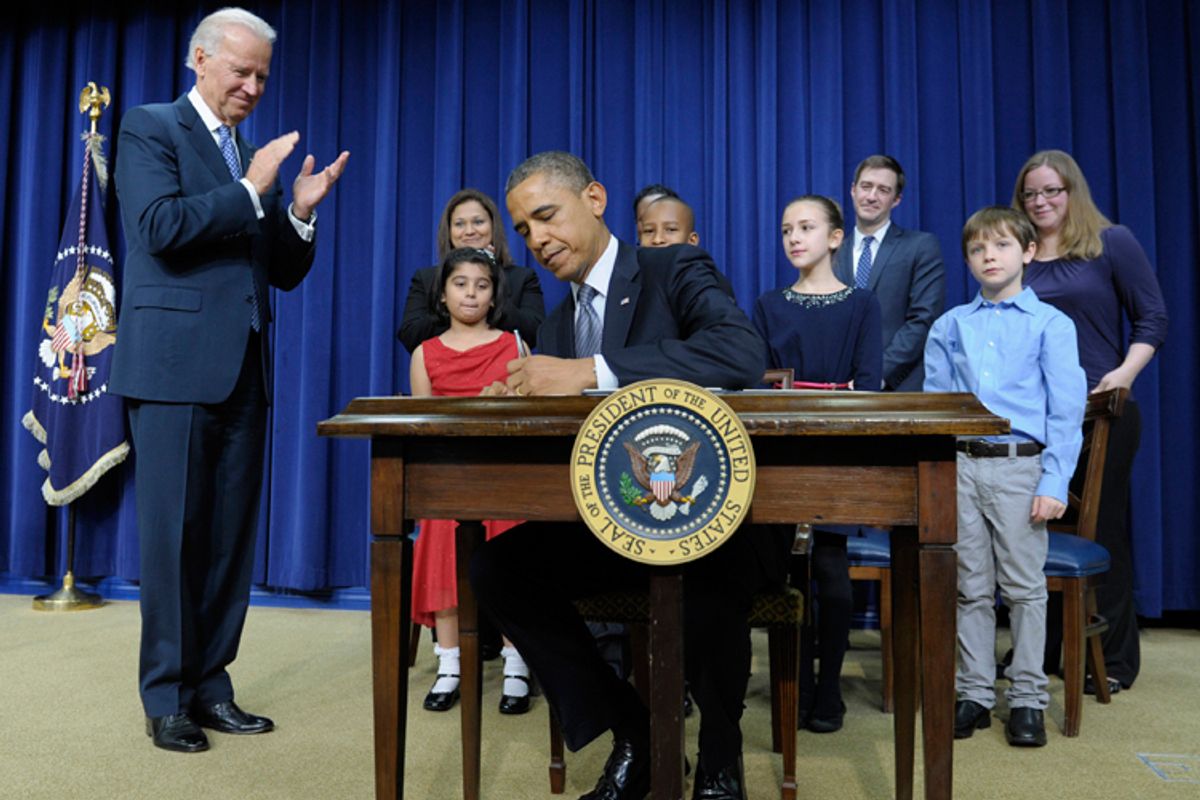 Savage won his Pulitzer for exposing the way President Bush used presidential signing statements as a power grab and he’s continued to write about executive overreach in the age of Obama. And he’s right about the executive orders – I missed this yesterday, as did most of us in the media.

Technically, as New York magazine noted Wednesday afternoon, Obama’s measures were “executive actions,” including three “presidential memoranda” and a lot of smaller, non-controversial items – or items that would be non-controversial in a different world, like "Launch a national dialogue led by Secretaries Sebelius and Duncan on mental health" or "Nominate an ATF director.” The shorthand distinction is that executive orders carry the force of law and "actions" don't. (You can look at the way the White House categorizes Obama's various executive actions here.)

I don’t point that out to denigrate the president’s moves or deny his bravery in standing up to the gun-manufacturers lobby, better known as the NRA. But with the right threatening to impeach Obama for his “gun grab,” it’s an important distinction. Rush Limbaugh is shrieking about the president’s “executive orders” and 2016 presidential hopeful Sen. Marco Rubio blasted Obama for “again abusing his power by imposing his policies via executive fiat instead of allowing them to be debated in Congress.”

Just like Rand Paul, Rubio was short on details about exactly what the president did wrong with his executive actions. “I think his point generally is that the president should be looking to work with the Congress, not around it,” a spokesman told Savage on Wednesday.

Iowa Sen. Chuck Grassley was particularly incensed at two actions, according to Savage: Obama’s directing the Centers for Disease Control and Prevention to study gun violence, and sending a letter to doctors and other healthcare providers clarifying a provision in the Affordable Care Act – introduced by NRA backer and Senate Majority Leader Harry Reid, for shame – that seemed to bar providers from asking patients about whether they had guns in their home. Administration officials say the CDC is prohibited from supporting “gun control” but not from studying data, and the ACA didn’t bar providers’ questions about gun ownership, only the creation of a gun-ownership database.

Sane Republicans are acknowledging that the president was well within the powers of his office with his 23 “actions.” As Reagan Solicitor General Charles Fried told Greg Sargent,  “These are either standard exercises of presidential power, or even more benignly, standard examples of the power of the president to exhort the public or state officials to be aware of certain problems and to address them.” Many of the actions consist of reviewing existing laws and encouraging “dialogue,” Fried notes.

With so much of the right in full-tilt freakout over Obama’s modest moves, it’s crucial to describe them correctly, as Fried did: Mostly, they’re an exercise in using the “bully pulpit,” in the words of Republican Teddy Roosevelt. Who probably wouldn’t be a Republican today.