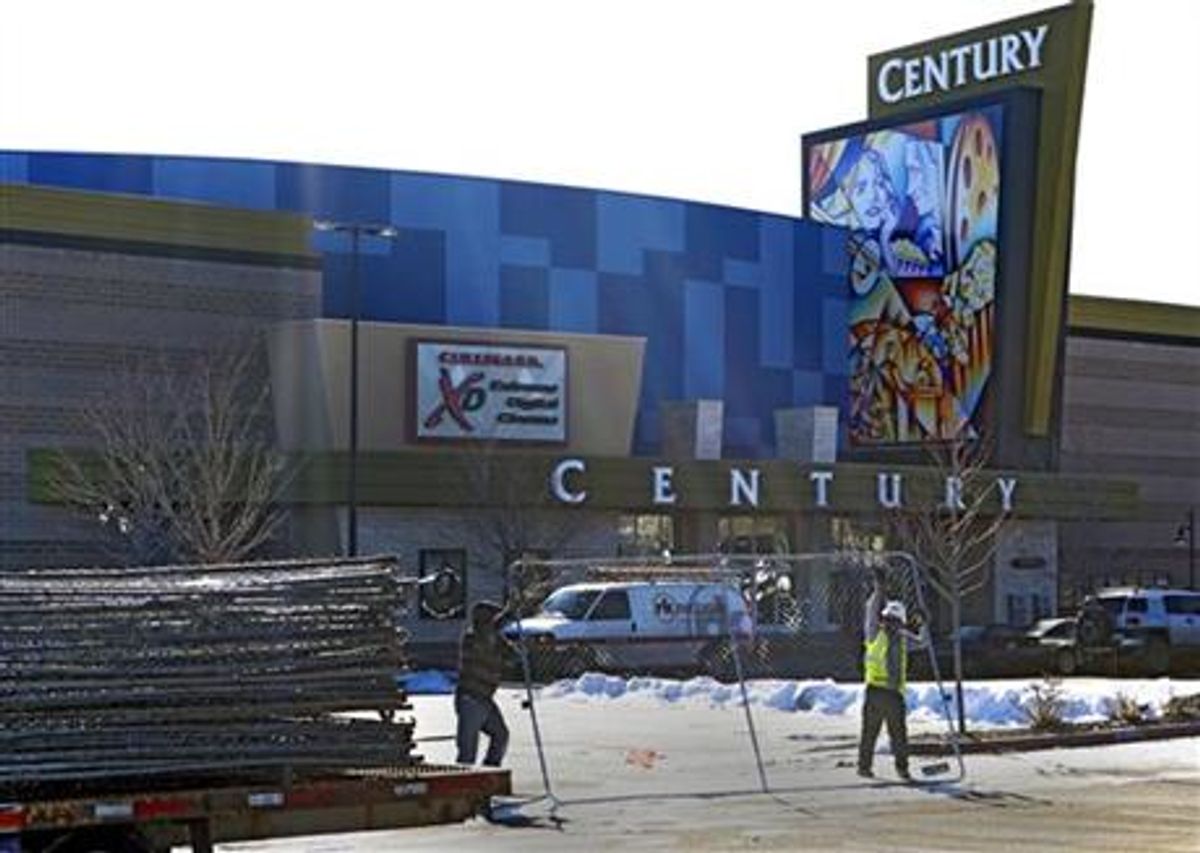 AURORA, Colo. (AP) — One survivor had to pause on his way into the theater and pray. Another braced for flashbacks as he entered the auditorium where 12 people died and dozens were injured during a massacre six months earlier. Others refused to come, viewing the reopening of the multiplex as insensitive.

The former Century 16, now renovated and renamed the Century Aurora, opened its doors to victims of the July 20 attack on Thursday night with a somber remembrance ceremony and a special showing of "The Hobbit."

Theater 9, where neuroscience graduate student James Holmes allegedly opened fire on a midnight screening of "The Dark Knight Returns," is now an XD theater with a wall-to-wall screen and stadium seating.

"We as a community have not been defeated," Aurora Mayor Steve Hogan told victims, officials, and dozens of police officers and other first responders who filled half the theater's seats at the ceremony.

"We are a community of survivors," Hogan declared. "We will not let this tragedy define us."

Pierce O'Farrill, who was wounded three times in the shooting, made a point of finding his old seat in the second row of the theater. "It was just a part of closure, just going back to that spot where, obviously, I was in the most pain I'd ever felt in in my life," said O'Farrill, who was hit three times and had to be carried out by the SWAT team, past the shooter's discarded rifle.

Holmes is charged with 166 felony counts, mostly murder and attempted murder for the shooting. A judge has ordered him to stand trial, but he won't enter a plea until March.

Several families boycotted what they called a callous public relations ploy by the theater's owner, Cinemark. They claimed the Texas-based company didn't ask them what should happen to the theater. They said Cinemark emailed them an invitation to Thursday's reopening just two days after they struggled through Christmas without their loved ones.

"It was boilerplate Hollywood — 'Come to our movie screening,'" said Anita Busch, whose cousin, 23-year-old college student Micayla Medek, died at the theater.

Victims have filed at least three federal lawsuits against Cinemark Holdings Inc., alleging it should have provided security for the July 20 midnight showing of "The Dark Knight Rises," and that the exit door used by the gunman to get his weapons and re-enter should have had an alarm. In court papers, Cinemark says the tragedy was "unforeseeable and random."

"Some wanted this theater to reopen. Some didn't. Certainly both answers are correct," Hickenlooper said.

The governor credited Cinemark CEO Tim Warner for flying to Colorado after hearing about the shooting to see what he could do.

Warner told attendees that the caring response to the tragedy by first responders, the community and the world was a testament that good triumphs over evil.

Samuel Aquila, the Roman Catholic archbishop of Denver, concluded the ceremony with a prayer for the dead and the living.

"All of us in some small way suffered in your suffering," Aquila told the crowd. "The way of peace means rejecting the violence of that night."

Cinemark planned to offer free movies at the multiplex to the public over the weekend, then permanently reopen it Jan. 25. Throughout the evening, police officers and security guards turned away people who drove up asking how they could get tickets to the upcoming free shows.

The decision to reopen even divided at least one victim's family.

Tom Sullivan, whose son, Alex, was killed, attended the event.

"The community wants the theater back and by God, it's back," Sullivan said. "Nobody is going to stop us from living our lives the way that we lived our lives before. This is where I live."

Alex's widow, Cassandra Sullivan, joined the boycott. So did Tom Teves, whose own son, Alex, also was killed.

"They can do whatever they want. I think it was pretty callous," Teves said.

Adam Witt, who was grazed in the shoulder during the attack, was expecting flashbacks when he walked into the theater Thursday night. He and his wife Tiffany were pleasantly surprised at how unfamiliar the renovated space seemed.

"It was strange but oddly reassuring," said Tiffany Witt, 24. "The way it looks different -- it gives us the feeling that we're moving on from what happened."

Marcus Weaver struggled to keep his emotions under control as he walked through the multiplex lobby. On July 20 he was shot in the arm and his friend Rebecca Wingo was killed. Thursday night he had to stop and pray before entering the theater.

He was glad he did. Inside he saw the woman with whom he had shared a terrifying ambulance ride on July 20, and another woman from his church whom he hadn't even realized had been in the auditorium that night.

"There was so much love in that room, it conquered all the ill feeling I had," said Weaver, 42, who wore a shirt bearing Wingo's name and image. "The shooter, he can't win. This community is way stronger."