Restricting abortions will backfire on conservatives

If the GOP wants to reach low-income families, it'll make sure they have the resources to care for their kids 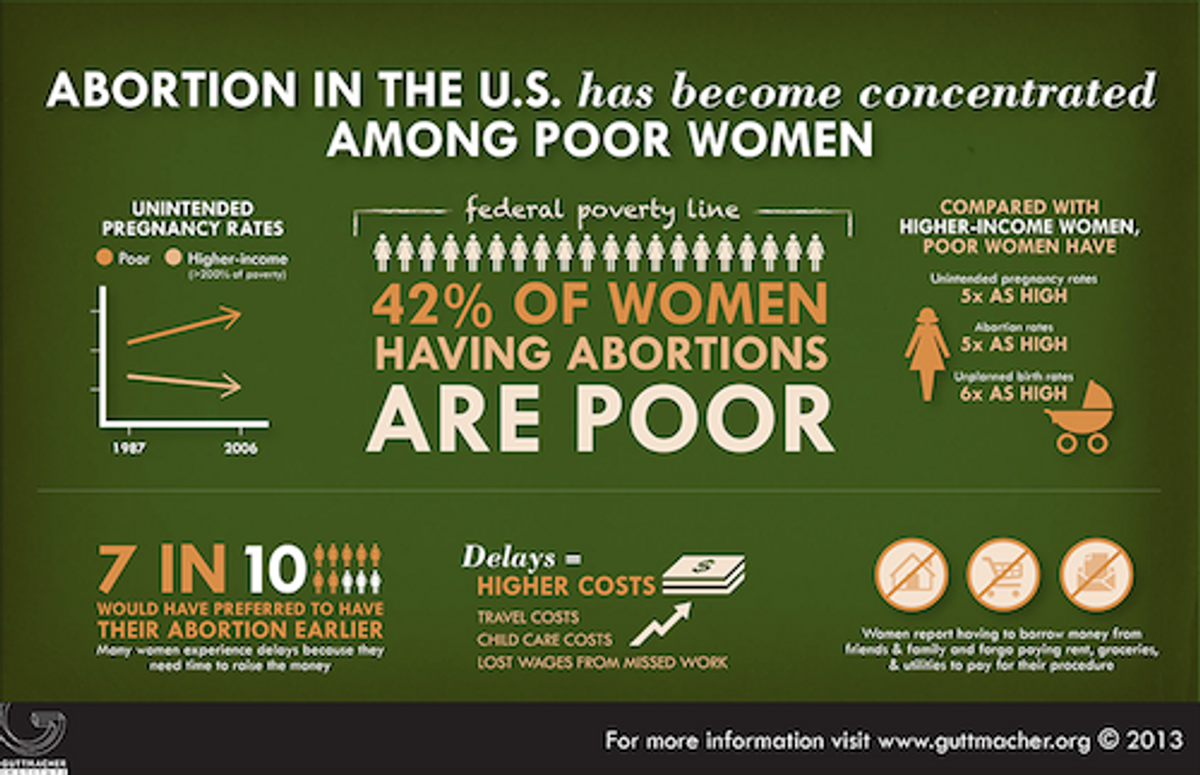 The Guttmacher Institute has a useful set of charts detailing the state of abortion in 2013, apropos of Roe’s 40th anniversary. The short story is that abortion is far more widespread than Americans tend to think; by age 45, almost half of American women will have an unintended pregnancy, and nearly one in three will have an abortion. Sixty percent of women who have abortions already have one child, 44 percent are married or have a partner, and 69 percent are economically disadvantaged. Conservative rhetoric notwithstanding, the vast majority of abortions occur in the first trimester, and 73 percent of women who have abortions are “religiously affiliated.”

Unintended pregnancies and unplanned births are highest among African Americans and Latinos, and accordingly, those groups have the highest abortion rates—40 percent for blacks, 29 percent for Latinos.

The most interesting facts—and the ones which should complicate the conservative message on reproductive rights—are on the economic status of women who have abortions. Here’s the chart:

A solid plurality of women having abortions are poor. Lower-income women have dramatically higher unplanned pregnancy rates than their higher-income counterparts, and unintended children are an economic burden for poor women, who don’t have the income to spare for additional children, and have to reduce hours or quit working in order to care for the child.

This should give pause to those social conservatives who seek to improve life for lower-income Americans. Promoting marriage makes sense—in that it can bolster outcomes and provide needed stability. But restricting abortion, and limiting access to contraceptives, is counter-productive to the goal of improving working-class lives. With full control of their reproductive health, women—of all incomes—can better plan parenthood, and ensure that they have the resources necessary to care for a child. For lower-income women, this is especially valuable; having a child when you’re 28, versus 22, can mean the difference between mobility and stagnation. This isn’t a new or insightful idea—it’s why men tend to marry and have children at later ages—but when applied to women, it becomes the cause for fierce political combat.

With that said, it’s clear that a genuine pro-family agenda—one that seeks stable and prosperous households—must include full support for reproductive rights. Otherwise, you’re making unwanted children more likely, limiting the economic options of women, and making it more difficult for lower-income families to climb the income ladder.