With Olympics in mind, Rio's "love hotels" clean up 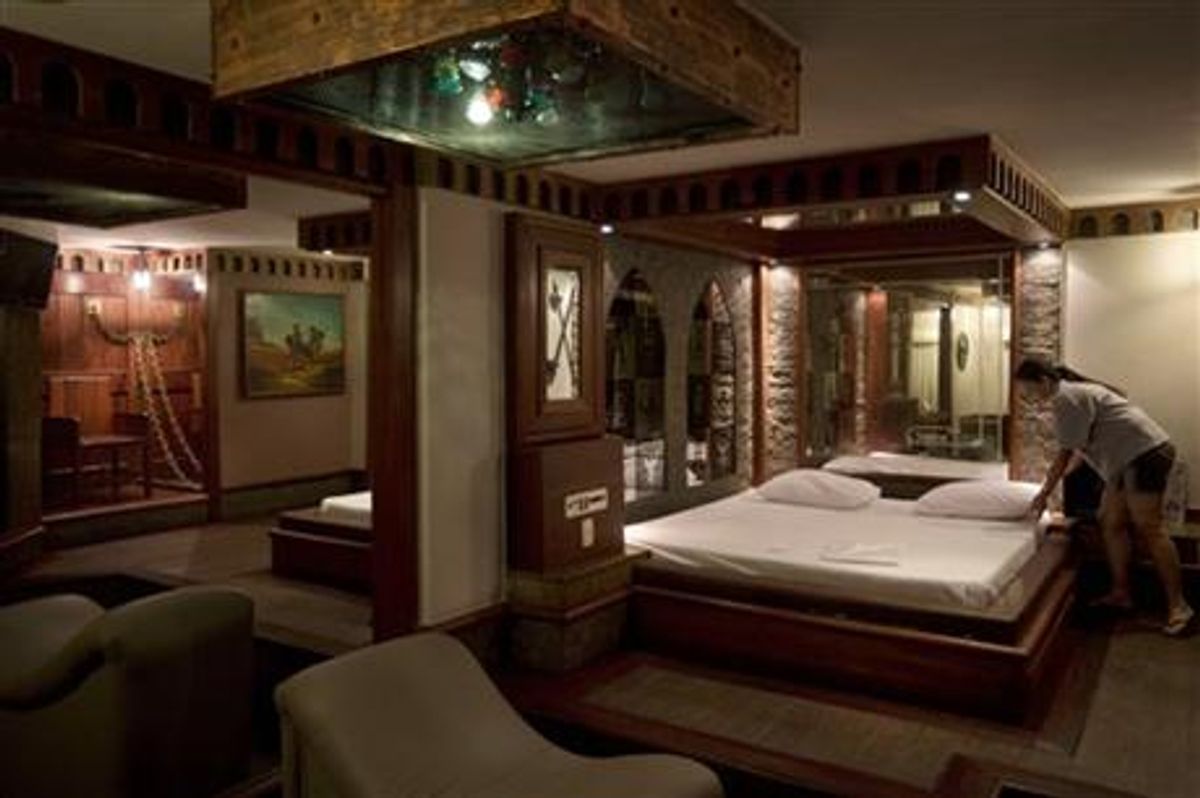 RIO DE JANEIRO (AP) — One worker strips mirrored paneling off the ceiling as another pries up the fiberglass shell of a whirlpool bath. A third man takes a sledgehammer to a life-size statue of Venus de Milo posing topless with a swirl of plaster robes hanging from her waist.

Like about a third of the city's 180 hotels that rent rooms by the hour, mostly for amorous rendezvous, the Shalimar is trading its oversized round beds and bondage-ready chairs for proper couches, functional desks and other businesslike furnishings. The goal is reinvention as a standard pay-by-the-day tourist hotel.

With next year's World Cup soccer tournament and the 2016 Olympic Games arriving in this seaside city, local officials are scrambling to solve a chronic hotel bed shortage so severe that during a UN conference here last year, the mayor had to appeal to residents to open their apartments to visitors.

The plan? Slash property taxes for love hotels, known as "motels" in Portuguese, that agree to tone down the decor and free up 90 percent of their rooms for the tens of thousands of visitors expected to flood the city.

"Motels have all the know-how to be able to put people from around the world up in style," said Antonio Cerqueira, a vice president of the Rio chapter of the ABIH hotel owners association, Brazil's largest. "What throws people is really just the decoration."

With only 25,000 beds, or just half the estimated 50,000 needed for the Olympics, authorities here hope to add about another 6,000 beds through motel conversions, Cerqueira said. New hotels with another 14,500 beds are also in the works, he added.

By comparison, the last Olympic city, London, has some 110,000 hotel beds.

Brazil's love hotels are virtual temples of kitsch and a longtime staple in the world's largest Catholic country, where young people have tended to remain at home until marriage.

Giant, coin-operated vibrating beds compete for prominence with bubbling baths built for two; mirrors proliferate, covering nearly every surface, and condoms and other sex-related paraphernalia share space in minibars with cans of beer and chocolate bars. A maze of towering walls or dense shrubbery shrouds the motels from prying eyes, with individual, covered parking spots that lead directly into rooms. Many offer a remote check-in that doesn't require looking anyone in the eye. Theme rooms with sexed-up variations on medieval, swinging sixties or tropical paradise motifs abound.

Teacher Paula Moura said motels were an institution in Rio's cultural landscape, and would be sorely missed if they disappeared. She said she used to go at least once a month with her boyfriend.

"We'd dress up, look for different ambiances," she said. "Plus you don't have mirrors like that at home!"

Now that she's unattached, she likes them because they're a neutral space, she said.

"You don't bring someone you don't know well into your house, and you don't expose yourself by going over to their house," she said.

Removing the sexy flair and giving the rooms a more neutral cast cost $15,000 to $25,000 per unit, said Cerqueira, an investment that stands to be partially offset by a 40 percent reduction in city property taxes through 2019.

Motel operators are still in talks with city officials over the finer points, but Cerqueira said he expects the deal to be inked by the end of the month.

Love hotels in Brazil have been on the decline since the 1990s, with most struggling to reach 50 percent occupancy. Conventional Rio hotels regularly hit an 80 percent rate and completely sell out at peak times such as New Year's and Carnival, said Cerqueira. Plus, because love hotel rooms must be cleaned and sterilized after each occupancy, which generally doesn't last more than a handful of hours, they're more expensive to operate than conventional hotels.

"Mores have been getting more liberal, and young couples who a generation ago would have had no choice but go to a motel are now welcome to stay at home," Cerqueira said. Most motel clients are married couples visiting on a lark, business travelers looking to save money by renting by the hour and the sector's perennial staple: adulterers.

Decorator Fabiola Brandao has been working her way through the Shalimar renovations room by room over the past four years, revamping 25 of the hotel's 61 rooms to date.

"We usually do two or three rooms at a time and kind of try to block off the area where the work is being done," said Brandao. Still, no matter how discreetly workers attempt to work, the banging of jackhammers and pop of nail guns often prove impossible to muffle.

"In those circumstances, we say to the client, 'Can we upgrade you to a better room, with a better view?'" Brandao said. "And then we send up a complementary bottle of champagne. It usually does the trick."

The new rooms "are the kind of place where you can stay for more than an hour without running away screaming," she said, adding that both the renovated and old-style rooms range in price from $34 to $190 for a 12-hour rental, the preferred length of stay for business travelers.

The Shalimar's management is planning to overhaul nearly all the units ahead of the Olympics, leaving but a few theme rooms, like the iron chain–strewn medieval suite.

Motel operators hope the tourist gold rush brought by the World Cup and Olympics will last far after sports fans have left. Despite its world-famous Carnival, the city attracts around 3 million foreign visitors per year, only twice the number of tourists London typically receives in the month of August alone.

"We've seen it happen before that hosting the Olympics really puts a city on the map," Cerqueira said, citing the examples of 1992 host city Barcelona and Sydney, where the 2000 games were held. "Rio de Janeiro has so much to offer -- the beach, the spectacular cityscape -- and with everything that's happening, we can only expect for interest to grow. We'll be ready for it."