Your comprehensive answer to every Sandy Hook conspiracy theory

Every conspiratorial allegation about the tragic Newtown shootings, answered 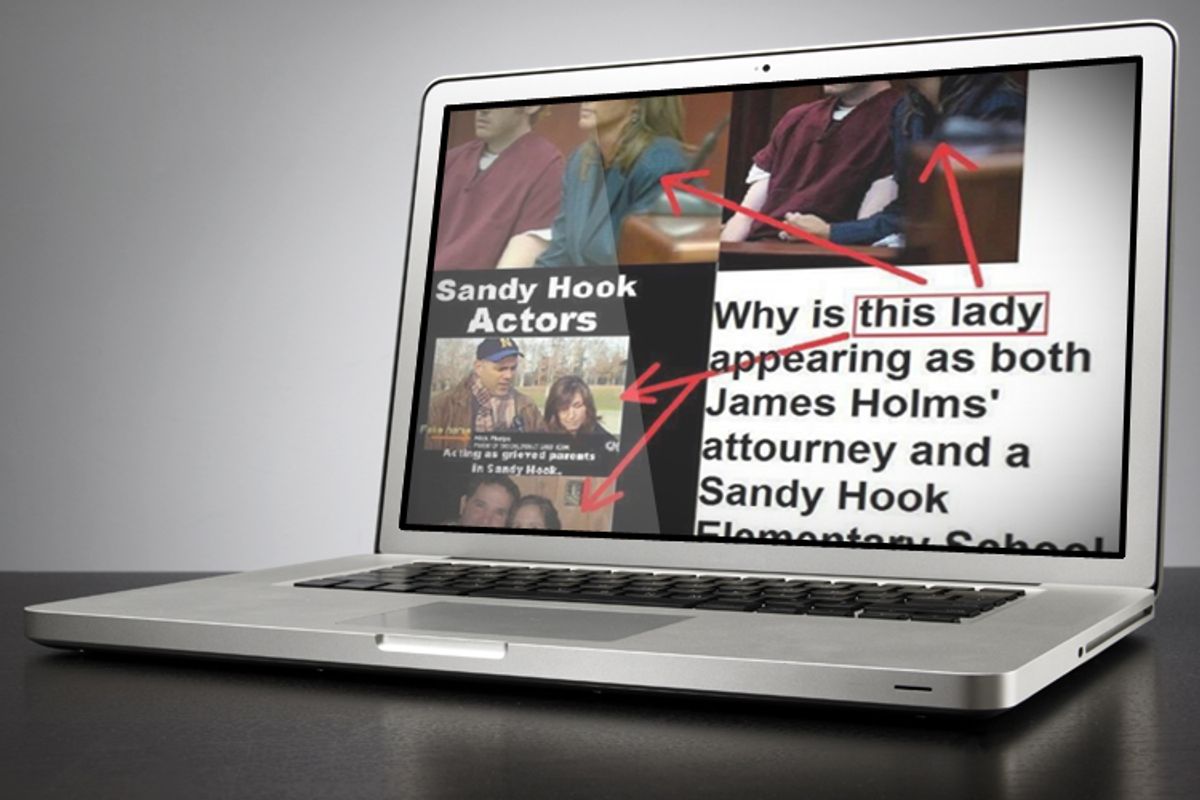 While it’s often best not to engage with conspiracy theorists on their own turf, as you can probably never convince them, it's worth setting the record straight on all the myths and phony evidence surrounding the Sandy Hook massacre.

We’ve rounded up every major piece of evidence we could find that leads theorists to say the “official narrative” of events "doesn’t add up" and provided the facts that show why these questions can be easily explained. We’ve ignored the empty accusations with no evidence to support them (it was the Jews!) and focused only on the theories that try to present actual empirical or circumstantial evidence.

Let us know if we missed any and we’ll add to it as more myths emerge. In no particular order, here is your comprehensive guide to disproving the Sandy Hook Truthers:

Why aren’t the adults sadder?  “They aren’t behaving the way human beings would act,” as conspiracy theorist Jay Weidner told fellow conspiracy theorist Jeff Rense on his radio show. Theorists have zeroed in on Robbie Parker, who they say wasn’t grieving hard enough for his slain 6-year-old daughter, Emilie. In one widely circulated clip, Parker laughs before stepping up to the microphone, and apparently someone says “read from the card” (as in cue card) before Parker breathes heavily in anticipation of beginning a press conference. “This is what actors do to get into character,” one popular YouTube video states. Rense and Weidner also take issue with the mourning of the school nurse, the family of slain teacher Victoria Soto, and others. “ALL ACTORS??? NO TEARS,” wonders the author of SandyHookHoax.com on a page featuring videos with numerous interviews from the shooting.

Answer: People mourn in many different ways, sometimes all at once. As a recent Scientific American article on gref noted, “oscillation between sadness and mirth repeated itself in study after study ... Time and again, a grief-stricken person’s expression would change from dejection to laughter and back.” George Bonanno, a psychologist at Columbia University who studies grief, even developed a way to determine if this mourner's laughter was genuine or merely a facade to hide grief -- he determined that they “exhibited the real thing.” Scientists think this is part of our internal resilience mechanisms kicking in, because constant grief is simply too much for a person to handle.

What about Emilie? One of the most common myths circulated on message boards and in YouTube videos is that Emilie Parker is actually alive. The “proof” is a photo purportedly showing her with President Obama when he visited the school after the shooting. Conspiracists know it’s Emilie because she’s wearing the same dress as the one Emilie wore in a family portrait taken before the shooting (an alternative theory is that the girl in the photo with Obama is her “double”). Other websites take issue with the family portrait, alleging it was Photoshopped for some reason, pointing to the fact that the Emilie is making a “devil's horns” sign with her hands and “making the devil’s horn hand sign isn’t easy. Try it yourself. Imagine getting a 3- and 4-year-old do it.”

Answer: The girl on Obama’s lap is Emilie’s little sister. It’s amazing that we have to say this, but sometimes younger siblings wear clothes passed down to them from older siblings, and sometimes siblings look alike because they are siblings. And there’s no evidence or even motive given for why the portrait would be Photoshopped. Making a “devil’s horn” gesture is actually incredibly easy. Try it yourself.

Why do they all look the same? Numerous websites juxtapose pictures of people from Newtown against pictures of similar looking people from Aurora, Colo., and assert they are the same actors.

Answer: Not all women with brown hair are the same person.

But what about the rifle? Alleged shooter Adam Lanza used a Bushmaster AR-15 assault rifle as his primary weapon, but conspiracist have seized on footage of police removing a long gun from the trunk of Lanza’s car. “This reveals the 'Big Lie' of the mainstream media ... the Bushmaster AR-15 rifle was left in Lanza’s car,” conspiracy website NaturalNews states in a story picked up by Alex Jones’ InfoWars this week.

Answer: Actually, the gun shown being removed from Lanza’s car was a shotgun he never used. Lanza brought three guns inside the school -- the AR-15 and two handguns -- all of which were found inside the school.

Answer: Actually, this is a very common glitch for constricted-date Google searches. The results are imprecise and can often display incorrect dates on the search page, even when the date on the actual page is correct when you click through to it.  For instance, here’s a Fox News story on the Sandy Hook shooting that Google says is from Oct. 1, 1983 -- how come Fox News didn’t stop the shooting if it had 30 years advance notice???

What about the car? Early on, theorists latched on to the notion that the black Honda Accord driven by Lanza was not actually owned by his mother, as police say, but by a man named Chris Rodia, who was mentioned on a police scanner at the time of the shooting. One theory is that Rodia may have been an additional shooter. An even more advanced theory is that Rodia may have been taking advantage of mentally ill people like Lanza and using drugs to make them do his bidding.

Answer: This one was debunked by the theorists themselves just a few days after the shooting. Blogger Joe Quinn obtained the police audio, which definitively debunking the myth. (Rodia appeared on the scanner because he was getting pulled over in a traffic stop miles away, but his license plate doesn’t match Lanza’s car). “This was a huge blow, because lots of people were making big leaps on this ... but we now have to look elsewhere,” another amateur investigator said on YouTube.

What about the man in the woods? Central to proving any conspiracy theory is finding co-conspirators, which in this case means multiple shooters. Theorists have seized on helicopter footage of a man getting chased by police through the woods behind the school as evidence there was more than one shooter. Who is this man?

Answer:  It was Chris Manfredonia, the father of a 6-year-old who attends the school. He was on his way to the school to make gingerbread houses with first-graders when he heard gunfire and smelled sulfur, so he ran.

Answer: Actually, he was, according to the Newtown Bee, “an off-duty tactical squad police officer from another town” who heard the gunfire.

What about the third man at the firehouse? Children fleeing the school said they saw a man pinned down on the ground in handcuffs outside the firehouse. Could this be a second or third shooter?

Answer: No, like Manfredonia, this man was briefly detained by police in the hectic aftermath, but quickly released when it was determined he was just a passerby, Connecticut State Police spokesperson Lt. Paul Vance, who was on the scene, confirmed to Salon. “Were there other people detained? The answer is yes. In the height of battle, until you’ve determined who, what, when, where and why of everyone in existence ... that’s not unusual,” Vance said.

Answer: In the stress and confusion of a situation like a mass shooting, misreporting is not just common, but the rule. And there's a reason eyewitnesses are viewed so skeptically in criminal court cases: They often get things wrong. The Supreme Court has called eyewitness testimony "notoriously unreliable" while the Innocence Project says "eyewitness misidentification is the single greatest cause of wrongful convictions." Yet theorists would have you believe that a small handful of media interviews with people on the scene trumps all the other interviews with people there and police and media reports.

What about that Gene Rosen guy? Theorists have fixated on Rosen’s account of that day and harassed him for it. Rosen sheltered six children during the shooting, but theorists have alternately claimed that Rosen’s accounts are suspiciously too consistent in various interviews he gave, or suspiciously inconsistent. Other people claim Rosen was an actor, because they claim he is a member of the Screen Actors Guild. And what happened to the bus driver? Why did Rosen sit with the kids for hours? Why didn’t he take them to the firehouse down the street where authorities were staging?

Answer: Rosen did invite the bus driver inside and she helped him contact their parents. An early AP report erroneously reported that he sat with the kids for hours, but he told us that the children were only inside his house for about 35 minutes. He did call their parents. Four parents came right away and Rosen took the remaining two to the fire station. Rosen is not a member of SAG (that’s a different Gene Rosen, who is seven years younger).

But how was the dead principal quoted? Theorists seized on a quote on the shooting in the Newtown Bee from a Sandy Hook principal Dawn Hochsprung, who died in the shooting. How could she have been quoted if she “died”?

Answer: The Bee quickly posted a retraction and an apology: “An early online report from the scene at the December 14 shootings at Sandy Hook Elementary School quoted a woman who identified herself to our reporter as the principal of the school. The woman was not the school's principal, Dawn Hochsprung, who was killed in the Friday morning attack.” Things are confusing in the aftermath.

What about the LIBOR connection? Early theories posited that the fathers of both Lanza and alleged Aurora shooter James Holmes were set to testify before the Senate on the (real) LIBOR banking scandal. Could bankers have been involved in the shooting to discredit the supposedly explosive testimony set to be given by these two men?

Answer: This one falls apart in just about every way and the hardcore theorists abandoned it weeks ago as a bogus. Ben Swann, the Ohio TV reporter who thinks there were probably multiple shooters at Sandy Hook, investigated and determined there was "no evidence" to support any of the assumptions in the LIBOR theory. TPM also looked into it and found it to be "100% false." There are no LIBOR hearings scheduled, neither man was selected as a witness, and neither man is in much of a position to deliver an explosive testimony on the scandal anyway.

Vance  said he was disgusted by the conspiracy theories. "There's no hoax. I was there. I stepped over the dead children. That's no hoax. And it's offensive to me as an investigator, and it's offensive to the families who lost their babies to have people come up with silliness like this. Whatever their reasoning is, whatever their rationale is, it's just terribly offensive," Vance added.