Greece puts itself up for sale

Some say privatization may prove to be the Greek government's best option, but who will pay the price? 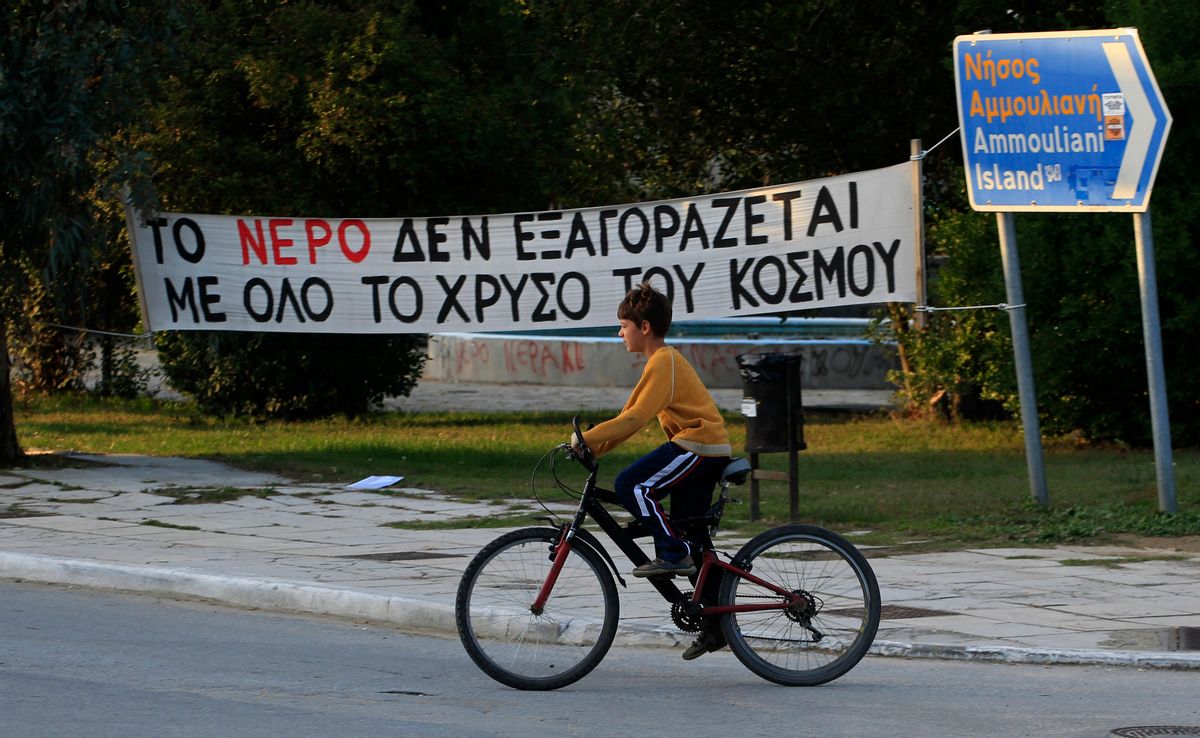 A boy cycles past a banner which reads in Greek "All the gold in the world can't buy water" at the village of Ierissos in the Halkidiki peninsula in northern Greece. (AP/Nikolas Giakoumidis)
--

ATHENS, Greece — Straddled with mammoth debts, the government has begun one of the biggest fire-sales in history — Greek-style.

Everything from police and tax agency headquarters in Athens to some of the world's most beautiful beaches are now open for investment at bargain basement prices as the government struggles to raise capital.

Take Afandou, a beach on the island of Rhodes. It could be yours for about $85 million.

Selling it could help this country recover from economic catastrophe. But that's not how locals see it.

“We already can’t access many of the beaches on the island since there huge hotel units informally block our way,” she said.

Beach access may seem minor compared to the enormous burdens facing the Greeks. Their ailing economy is barely staying afloat on rescue loans from other European countries and the International Monetary Fund.

The IMF said on Wednesday that it will release an aid installment of $4.3 billion, which had been frozen for months over fears the troubled Mediterranean country wasn't implementing the required austerity and other measures.

Among them, Greece's agreement with the so-called troika of creditors — the European Central Bank, the European Commission and the IMF — commits the government to raise $67 billion through privatizations by 2022.

“The state loses money every day because it keeps ownership, and more significantly control, of these enterprises,” said Nicholas Economides of New York University’s Stern School of Business.

Besides the beaches, some of the items on sale include: 35 government buildings; the government’s stake in South Eastern Europe’s biggest oil company, Hellenic Petroleum (HELPE); shares in Athens airport and the Hellenic Horse Racing company; the Athens Water Supply and Sewerage Company (EYDAP); rights to 39 regional airports and 12 ports; the state lottery; and the Hellenic Post, the Greek post office.

But some argue that Greek taxpayers will lose in the longterm.

Even buildings housing Greece’s most important public services — such as the police and new offices for the health, education and information and communication ministries — are up for sale.

But no official has yet clarified where their bureaucrats will move. Many believe some of the ministries will lease back the buildings from their new private owners.

“If that's true, it's good in the short-term, but not in the longterm,” said Theodoros Pelagidis, an economics professor at the University of Piraeus. Leasing buildings for those agencies would increase the state’s expenses over time, he added.

Meanwhile, the blowout sale is bringing in much-needed euros to Greek government coffers. OPAP, the gambling company that runs Greece’s 13 lotteries, is a big earner. But although it generated more than $700 million in 2011 alone, its sale is expected to pull in only $2 billion.

For a country $16.3 billion in the red during the first nine months of 2012, some argue the government needs to hold onto every moneymaker it has.

“The shift in ownership means the state will collect money [in the short-term],” said Yiannis Metaxas, professor of political science at University of Athens. “But you are giving up the [long-term revenue that comes with] access to the purchasing public.”

Allegations of corrupt privatizations have created more criticism. Most of the state-run Agricultural Bank of Greece (ATE) was sold to the private Piraeus Bank for $125 million in July. Analysts value just one part of ATE, its real estate book, at more than $1 billion.

More than that, taxpayers will end up losing an equivalent of $14 billion on the sale because they still hold onto the bank’s liabilities even as Piraeus gained its assets. Many Greeks are angry about what they claim is a bad deal for taxpayers.

“ATE’s sell-off was a quick write-off of politicians’ corruption in their transactions with businessmen,” said Helen Tsourounakis, an English teacher in Athens.

But the bank isn't the only sale many say has been badly handled.

The International Broadcast Center (IBC) once housed the world’s top journalists. It is a gleaming media palace built for the 2004 Athens Olympics.

Four years ago, the Greek government leased out the building for 40 years. The winning bidder was Lamda Domi SA, a company owned by one of Greece’s richest families, the Latsis.

Normally the lease would mean a total of about $465 million for the government, but in October it  leased the TV center again — this time, for up to 140 years. Lamda won again. But this time, the Latsis will pay just $150 million. The government failed to explain why the previous lease was canceled.

The Greek government appears determined to proceed with the privatizations nevertheless.

But although economic indicators are starting to look less bleak, investors haven't come flocking back yet, and there are several theories about why.

Takis Athanasopoulos, who is overseeing the privatization program, told Greek media that investors have been scared off by the political chaos: “This year included the formation of an interim government, the [bank] negotiations, the second loan agreement, two elections, and the formation of the unity government” in charge of Greece.

“Whenever a German, an Austrian or a Dutch politician refers to our exit from the euro zone, I say to myself: How can I privatize public enterprises?” Samaras recently told German newspaper the Sueddeutsche Zeitung. “Which businessman would want to invest euros in Greece, if they found that they were then obliged to collect [returns] in drachmas?”

But critics say that although privatization can benefit both the state, which earns revenue, and consumers, who gain private sector efficiencies, that's not likely to be the case in Greece.