In Gyumri, you can play Soviet-era video games that feature protagonists from old Russian fairy tales 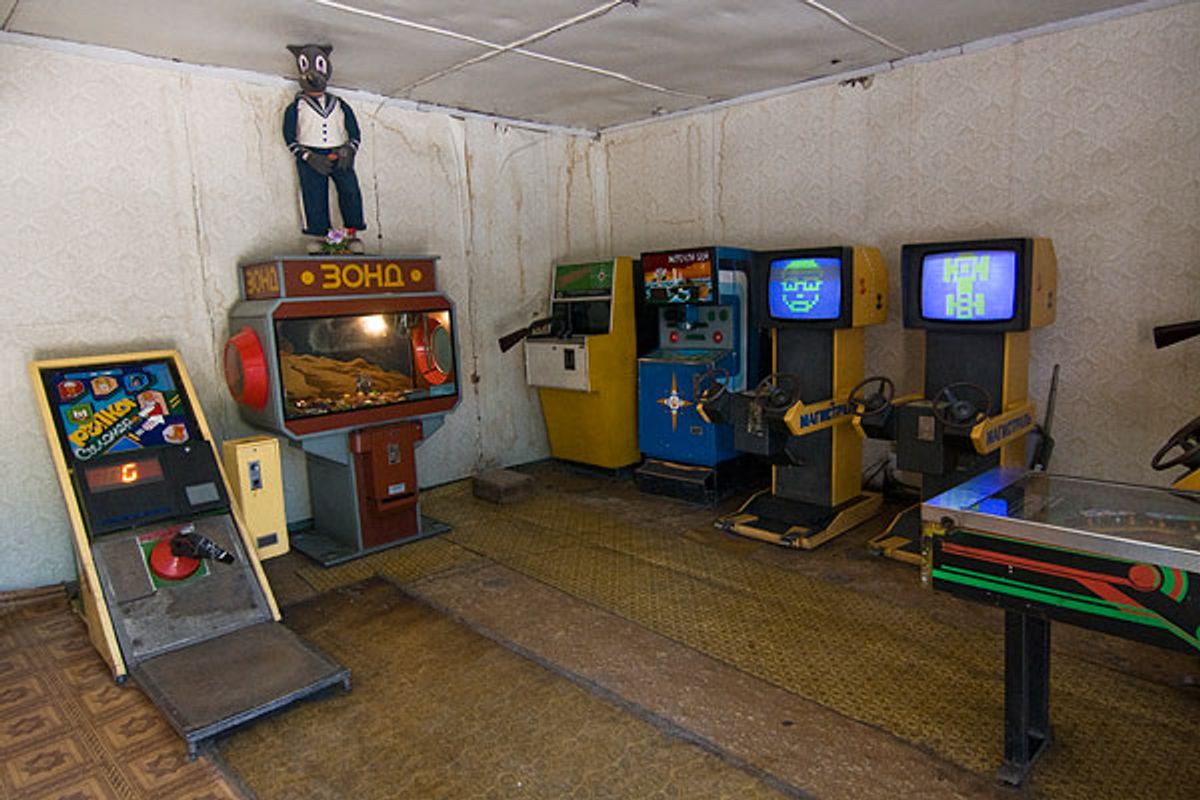 Published on The Verge yesterday is a long feature article on the history of the American arcade, which kicks things off with this line: “The defining feature of a ‘real’ arcade, however, is that there aren’t really any left.” Photographer K. Shamlian would beg to differ. His images of an aging Soviet Union arcade in Gyumri, Armenia present an archetypal arcade frozen in time, unchanged for the past 30 years of tumultuous history.

Verge writer Laura June pinpoints the start of the “golden age” of video game arcades to 1974. In 1978, Space Invaders was published, and became the most successful video game ever created. The next few years boasted the release of arcade cabinets that have since become household names: Games like Asteroids, Pac-Man, and Nintendo’s Donkey Kong were runaway hits that later entered America’s living rooms in the form of video game consoles.

The Soviet arcade in Gyumri, though it opened in 1981, boasts none of these. Instead, the aging cabinets, still fully functional, look like generic versions of the classics. There’s a driving game with super minimal, pixelated graphics, a shooting game complete with rifle controller, and Turnip Strength Tester, which was adapted from a traditional story about a turnip that needed three people (plus the family’s pets) to pull it out of the ground. Instead of plumbers and mushrooms, the Soviet games feature the protagonists of old Russian fairy tales like wolves, foxes, and rabbits. Though Tetris, which is familiar to gamers around the world, did come out of the burst of Soviet video game creativity.

The Gyumri arcade forms a parallel universe of video game culture apart from the glitzy, internationally known cabinets featured on The Verge. In fact, while the Soviet arcade has remained an attraction for locals and tourists (though far less than in its heyday, when there was no room to move in the player-packed space, Liana Aghajanian writes), the American public turned against arcades around 1982. Cabinets were called “sucker bait” by Time Magazine, and games became harder to cater to hardcore fans rather than mainstream players. Concerns about the impact of games on children were rampant (from recent events like Joe Biden’s meeting with video game manufacturers, it’s clear that this controversy has by no means gone away).

Arcades are on their way out in the United States, but there remain stalwarts like New York City’s Chinatown Fair, which opened in 1958 and recently remodeled after an extended hiatus. But as relics of an earlier age, arcades are more like museums than thriving social destinations. They preserve a particular niche culture, one that’s not so relevant in the age of console and smartphone gaming, but still historically significant. The Museum of Modern Art is collecting video games, and the Classic Arcade Museum in New Hampshire features hundreds of vintage games. The Gyumri arcade, still somewhat in use, is a living museum of a video game culture that’s only beginning to be preserved and understood.