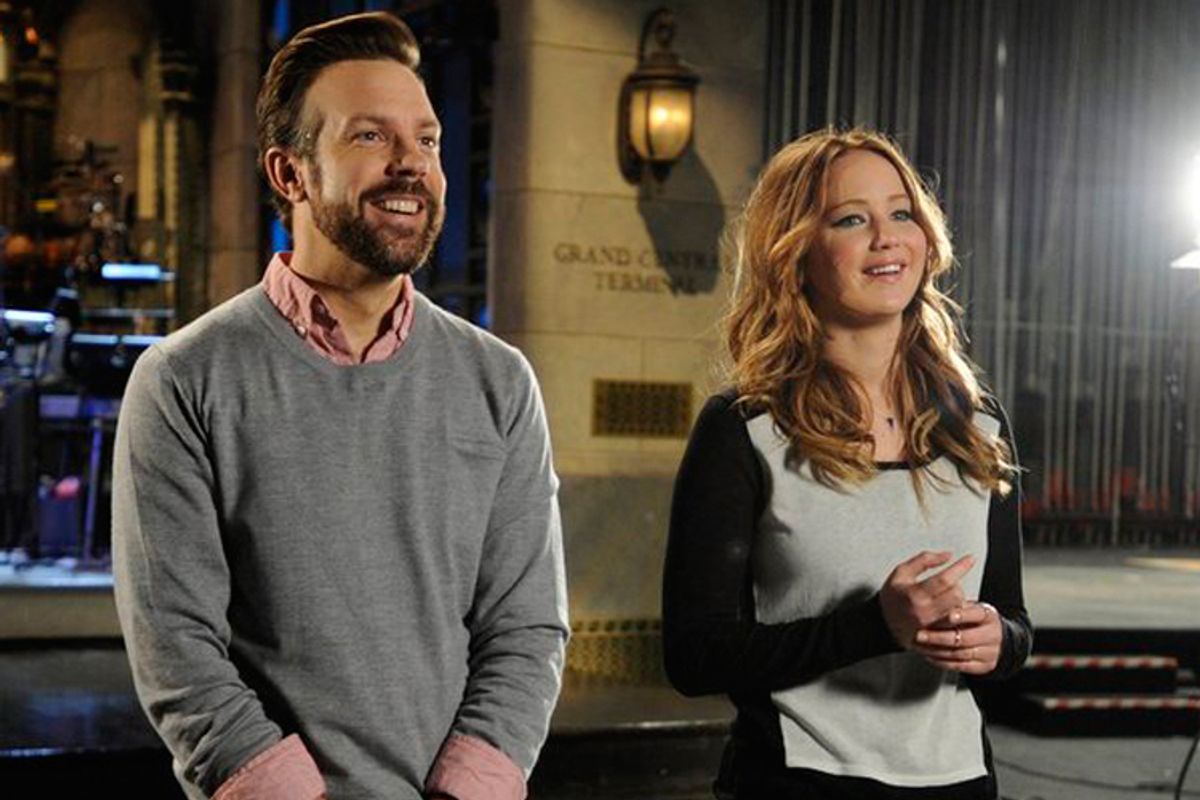 "SNL" returned last night after taking a monthlong break, which seemed to have no restorative effect whatsoever on the show's writers.  With the exception of a few chuckles (and I know that commenters will say that this is true of every episode. I've tuned in since the eighties, believe me I know. But I still hold out hope), this was a big yawn of an episode. Part of the problem is that the writers didn't quite know what to do with Golden Globe-winner, J.Law, who proved in such sketches as "Danielle: A Free European Woman" and "Richard and the Buffalo" that she is game to let her freak flag fly. Mostly, they saddled the best-leading actress Oscar nominee with pouty, dour supporting roles. And, predictably, they made her trot out old Katniss Everdeen.

J.Law can keep up with the early morning radio dawgs (Taran Killam and Bobby Moynihan) in the Richard and the Buffalo sketch, as "Busty Rhymes," an aspiring rapper and the resident chick of the Minnesotan smalltown radio station. Yes she's busty, but rhymes — girl's got work to do.

SNL cold-opened with Piers Morgan (again, Killam), to take on the week in bizarre disclosures: Lance's 'roid-rage-like defiant, unapologetic apology (Jason Sudeikis), a dimwitted Manti Te'o (trying to explain how he was duped. Eh. The real laughs came from Jodie Foster's coming out speech, as Kate McKinnon came out as "gaaaaayyy-me for anything," a "Lezzzz-lie Nielsen fan," who loves "Girls" — the show.

I am almost certain this "Hobbit" sketch was a tip of the hat to our film critic Andrew O'Hehir's essay, "Why does 'The Hobbit' look so weird?," as they referred to Peter Jackson's new "S#!TVISION," skewering the filmmaker for stretching "The Hobbit" into a three-parter. Here, those final two installments are stretched into 18 more movies, to maximize the franchise, with titles like "The Hobbit 8: The Elf Queen Tries to Pick an Outfit" and "The Hobbit 11: Trying to Split a Complicated Bill," and later, some filler films to advance things along, "Grumpy Old Hobbits" and "Hobbitz: Back in the Hood."

I've always loved "SNL's" fake commercials — one of my favorite sketches of 2012 was "Almost Pizza" with Bill Hader and Kristin Wiig — they're often the most memorable moment in the show (and most expensive to produce, which is why we see them recur throughout the season). So I was shocked to watch their sendup of the new Starbucks Verismo (Starbucks' Keurig-like machine), which is designed, in this commercial, to give you the complete Starbucks experience. The in-store experience. The worst possible in-store experience. Vanessa Bayer asks her new barista machine for a latte. The "baristas" are voiced by a black man (Verismo) and a black woman ("Verquonica," a machine adorned with big gold spangly earrings), and they butcher her name and give her a tea. Verismo is baffled. Verquonica yells at Verismo. Yells at Verismo about her. The two virtual baristas get into it. And make her wait for ten minutes and still get her name wrong.

There is nothing subtle about the racism here. I don't expect this sketch to stick around too long, so if you're curious or eager to be infuriated, watch it now before NBC is forced to take it off the air and their website.

Next week, the host is Adam Levine, the musical guest is Kendrick Lamar. Here's hoping they get it together by then.