What is a black conservative doing in Hannah Horvath's bed?

Black conservatives have long been used as props by the GOP — and now by Lena Dunham, on Sunday night's "Girls" 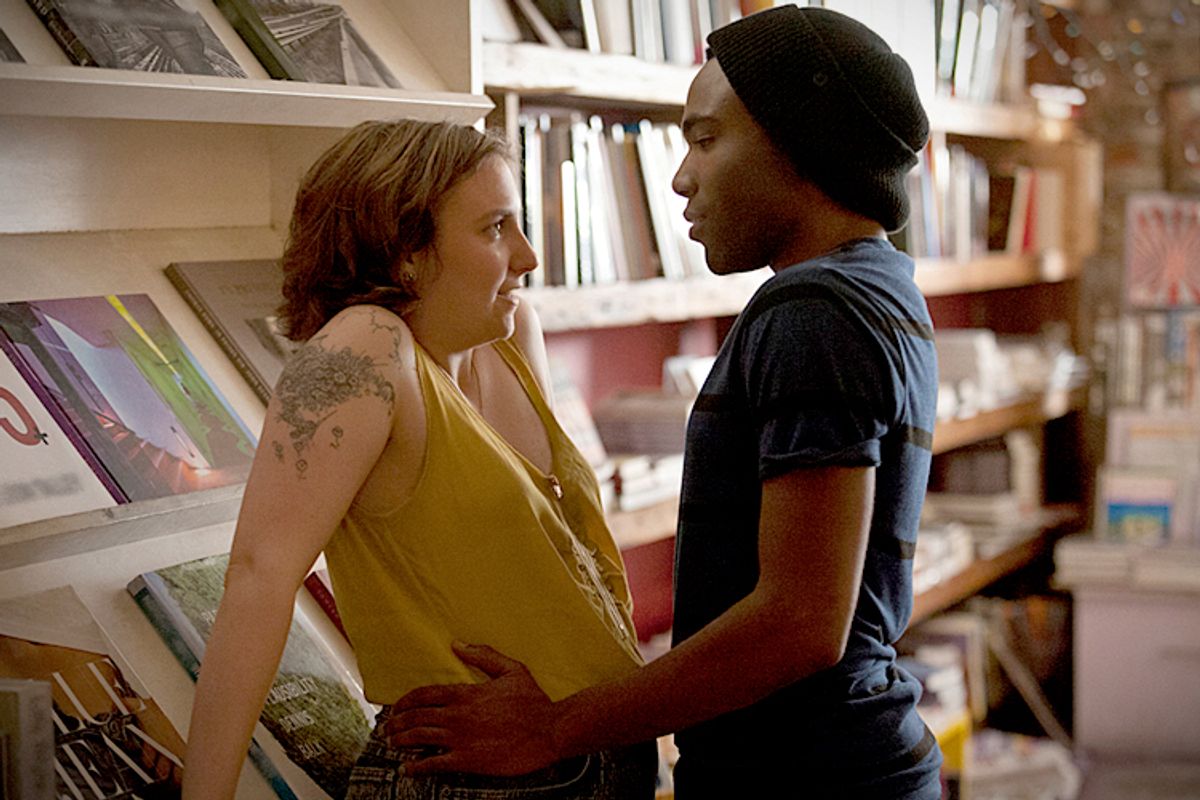 So long Sandy, Donald Glover's black Republican on "Girls," we hardly knew ye. Then again, black Republicans have long been used as symbolic props, so why not on this show?

All this is — to borrow Jack Balkin's phrase — is "ideological drift," when one side co-opts another side's ideas and symbols in service of its own conception of the world. Officially rejecting the pursuit of diversity as a good in itself, Republicans claim they have the real lock on it. That's one reason why black Republicans are habitually more prominent in the party's self-presentation than in its voter ranks. After Scott was named late last year, Adolph Reed published a scathing op-ed in the New York Times, putting Scott in a tradition of black conservatives as "cynical tokens" and writing,"Clichés about fallen barriers are increasingly meaningless; symbols don’t make for coherent policies." This, of course, gave some (white) conservatives a renewed chance to claim that Reed and people like him were the real racists.

Which brings us back to Lena Dunham, who shares this quality with the Republican party: She's been accused of inadequate representation. Unlike the GOP, it wasn't quite clear in the first season whether this was a fundamental problem (she, as a creator, forgot about non-white people) or a deliberate representational one (her characters live in a narrow, narrow world, and you're not supposed to like it). Last night's episode suggests that as of now, at least, it's the latter, and she's in on the joke.

Sandy's hasty exit after a rhetorical trainwreck of a breakup might be temporary, but for now, we don't know why this charming young man is who he is. He doesn't seem to be a practicing social conservative, having spent almost all of his screentime cheerfully mid-coitus or somewhere on the way, and despite the protestations of Hannah's roommate, Sandy doesn't seem to care about gay rights one way or another. All we know is that he's in law school, his parents weren't conservative, he has Ayn Rand in his "library," and he thinks gun rights are complicated. (To be fair, this is more than we know of the black partygoers that materialized to listen sympathetically at Hannah's housewarming in the first episode.)

But the cursory rendering of Sandy's character mirrors how Hannah sees him, as just a nice guy who, when they're having sex, "there's no part of me that wants to pretend I don't exist." (This innovation shouldn't be taken lightly.) His being a Republican, she tells Jessa, "feels weird," but she doesn't have more to say about it because her own politics are so underrealized and unexamined. Jessa's vague assertion that both sides are "dirtbags" and namedropping the Glass-Steagall act makes her seem enlightened in comparison.

Here is the real problem: whether or not Sandy respects her art, which for Hannah is always an unmediated extension of her ego. (We never experience her writing, just her comically fluffed-up self-regard.) As Jessa says earnestly, "He's not reading your essays, he's not reading you."

The breakup scene is all we need to see to know that Lena Dunham has no interest in making Hannah at all sympathetic to anyone who might even attempt it. Hannah is the only person who might find remotely convincing Sandy's rote repetition that her essay was "well-written" before he says, "I just didn't feel like anything happened in it." At first, Hannah is in denial, insisting that everyone else loves the essay, and that something does happen: "A girl's whole perspective on who she was and her sexuality changed." Wounded, she turns on Sandy with the closest thing she can grasp at: his politics.

What follows is a series of incoherent and mutually inconsistent statements -- from Hannah, not the black Republican, who sounds utterly reasonable in comparison. "I know what I believe," he says calmly. Hannah lectures him on how life is harder for black men in America, then she wildly insists she has never noticed that he's black. The claim that "I don't live in a world where there are divisions like that" may be last-ditch desperation, but felt generationally and socioculturally off-key; I would have believed it more if Hannah had claimed to know all about oppression as a woman from the Midwest. (She also pretends to not know who Missy Elliott is, right after quoting her.)  Sandy calls her out for being just like the other hipster white girls who dated him but "can't deal with who I am." The biggest transgression here, he implies, isn't actually racial; it's political, or at least that he doesn't fit a particular script.

When Hannah accuses Sandy of fetishizing her because he seems to have dated so many white women, the following sentence could double as Dunham speaking to her less-generous critics: "You just think of us [white women] as just one big blobby mass with stupid ideas."

It's clear Hannah dead-ended the relationship because her feelings were hurt, but she paints herself to her friends as a political martyr who just can't be with someone who doesn't respect gay people and women. The audience knows better: This is hardly about either. Dunham may be winking at the controversy as a writer, but here she's refusing to make her character any more lovable, any more enlightened, any more able to truly see other people of any kind. Like those reviled and defensive black Republicans, Sandy is all symbol, no policy; he is too little, too late. Hannah's learned some things since last season — including how to better advocate for her needs, particularly sexually -- but so far hasn't learned that much beyond the most selfish scope of those needs. Nothing much happens, to borrow Sandy's words. Which, other implausibilities aside, is itself pretty believable.