All the weight I didn't lose

After surgery, I shed 250 pounds, but I'm torn between accepting my body and getting more operations to "fix" it 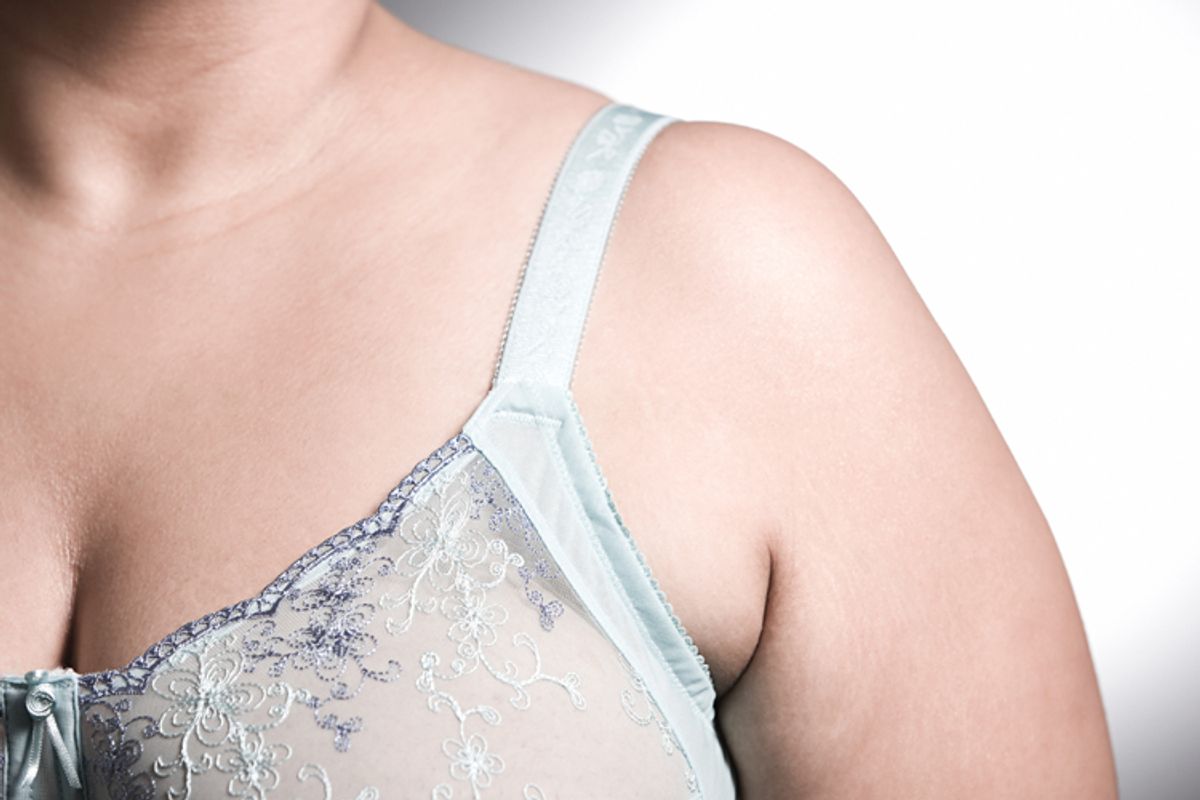 "Body Issues" is a personal essay series about obsessions with our own shape.

Everyone knows this trick: You hold the camera above your face, stretch your neck and shoot. I take my own picture this way. You see my heart-shaped face, my cutely assertive chin, and my dark brown eyes. Sometimes I peer insouciantly over the rims of my glasses. You don't see the double chin or the pudgy roundness of my face. You don't see my body, apart from the cleavage I occasionally throw in. Pictures make me thinner than I am, or will ever likely be. That angle slices away more pounds than my surgeons, and that's saying a lot.

I am the “after” side of surgery, having lost more than 250 pounds. No one gets this, at least not without an explanation, because I still weigh over 200 pounds, and the weight loss fable is supposed to end when you're thin, not when you're merely “an average fat American.” I still wonder if I should get more surgery. I have so many pieces of clothing that fit, but that I reject because they cling in one place wrong. That particular place is my right thigh and calf, which are obviously larger than the left. (I call it my freak leg.) Doctors have no real explanation, but the general theory is that a fall I suffered when I weighed 600 pounds actually broke off a chunk of fat in my calf. That place just above my knee seems swollen, and is the reason I can't wear skirts anywhere close to above the knee. If jeans stick to the freak leg, I toss them into the back of the closet and try another pair.

In general, I have bravado about my body. I worked hard for it, and I willingly wear a swimsuit in public. I endured surgeries for this body. I lost my navel when they chopped off all my redundant skin. “Redundant.” The word reminds me of English movies where someone gets fired, "made redundant." I have wanted to fire my whole body at one point or another, but that putrid mass of dangling gut skin, my prize after losing nearly 300 pounds, sat quivering at the top of my layoff list. It oozed and wept and smelled like old gym socks. I could lift it like an apron -- not an uncommon phenomena in gastric bypass circles. The surgery to remove this old skin is actually called a panniculectomy because the latin word for apron is "pannus."

If you're a woman fat enough to have required a panniculectomy, and you're not a total uggo, you've probably heard the best, worst compliment thin women can bestow: "You have such a pretty face!" They say it the way you apologize to someone when a pet dies. The "but" hangs in the air, unspoken, and the person who tells you about your pretty face generally shakes her head sadly before walking away.

I remember the first time someone told me about my face. Sixth grade, Central Elementary School, Amy L. She had stringy arms and wide blue eyes and long brown hair, stick straight and shiny. She carried a Bermuda bag with her initials on it and liked to encourage my romantic prospects by talking her creepy redneck boyfriend's pals into pretending to ask me out. She sauntered by my desk one day after lunch, her slow walk and the grin on her face giving me unsubtle clues about her intention.

Amy changed the order of things a bit by starting with the sad head shake. "You have," she paused, shaking her head again, "such a pretty face. Such. A. Pretty. Face." She smirked, and wandered off to tell her friends about this coup. I went to the girls’ room and looked in the dull mirror, its edge chipped in one corner. My hair needed brushing. I have wildly curly hair and a very sensitive scalp, so I spent the '80s looking like someone had electrocuted a very fluffy squirrel and stapled it to the top of my head. My enormous old lady glasses had smudges on them, and my expression looked like what would happen if sullenness and impotent fury made a baby on my face. I tried to give myself a pep talk. What did Amy know anyway? She still thought Swatches were a good idea.

But I grew older, and stronger, and now my face has its moments, especially now that I've found decent conditioners and a pain threshold high enough to allow for regular brushing. The dead squirrel look gave way to soft, floaty curls with decent volume. My hair is probably my best feature, but my eyes run a close second. I accentuate them with fatty eyeliner from Sephora. When I feel particularly fancy, I throw on some Urban Decay eye shadow (a silver color they call Uzi) and finish it off with mascara. I tilt my face toward a camera I'm holding over my head – or a laptop, or whatever piece of technology people are using to take pictures these days, maybe a toaster -- and then watch people "like" the images on Facebook.

Of course you have to be careful with that cheating angle on dating sites. Eventually I started posting full-body shots, and I met my current boyfriend on OKCupid. But before I wised up, there were a few travesties. I went on a date with a guy from Detroit. We'd exchanged email for a month and had a bunch of nice phone conversations, but when we finally met in a Starbucks, he took a phone call about 10 minutes in, made an excuse about his mother, and bailed. Later he sent an email saying his mother died. The email seemed to suggest that I'd had something to do with it. I suspected it was all a lie, given the way he looked at me as he left. And I made jokes about that meeting, played it for laughs, but I felt real anguish. I felt certain that my body repelled him.

I know I'm a specialty item, and that dating, as my friend Becca likes to say, is not a merit-based system, but I feel like losing 300 pounds and having a 40-pound chunk of skin cut off really ought to be enough. I feel like there ought to be an end point, or a time in my life when I'm allowed -- or allow myself -- to think of something other than my body and how wrong it looks.

The truth is that my body serves me well. It fills out a size 22 dress or sweater in ways that some men find very appealing. I have a resting pulse rate of 60, somewhere in the athletic range. When I work on myself, I swim laps and take a lot of long walks. I dance. I climb stairs and do all my own stunts. Despite all of this (and the cleavage), when my boyfriend moves to take any of my clothes off, I ask him to turn off the lights. This body I worked so hard for and that my boyfriend takes so much pleasure from still troubles me. I shop at thrift stores and look at dresses I will never wear. All the prettiest clothes come in sizes 8 and smaller. I have beautiful friends with amazing figures. I find them clothes on the free table in the building where I teach. They think I have a Santa Claus complex, or that I'm a nice, thoughtful person. I'm really just sort of covetous. I want every one of those dresses, blouses and jackets -- handmade castoffs from the fashion program at my university -- for myself. Giving these pieces to thin friends is simply the best that I can do.

And so I wonder if I shouldn't work on more surgeries. Having the freak leg corrected would serve a medical purpose. In addition to looking like holy hell, that sheared off chunk under my skin impedes circulation, causing wrenching muscle spasms so intensely and nauseatingly painful I've wondered if my calf muscle might succeed in ripping itself off the bone. People who lose most of the excess weight through gastric bypass sometimes have a revision surgery. These people are extreme cases like me, people who weighed more than 400 pounds and whose "after" falls short of the fable. They get a second bypass and move closer to the cosmetic ideal. I think about revision, but lack the motivation I had with the initial surgery. When I let people cut me open and splice parts of my intestines to my gut in ways not intended by nature, I did so because I knew that if I didn't have surgery, I'd die. Life expectancy at my start weight was 35 years. I had the operation when I was 33.

I don't need another surgery to stave off imminent death. My heart and lungs work well. My cholesterol is ridiculously low, and my blood pressure is normal. If I had another surgery, I'd be doing it purely for cosmetic reasons, or so that I could land some future boyfriend who'd probably look at my current shape with disgust. While I'd like to shop at Mod Cloth and have all the dating options thinner women enjoy, I also enjoy being alive, and now fear surgery a lot more than I did. I also wonder how much I'd enjoy dating someone I suspected would hate any version of me. Not much, I decide.

When I want to imagine the body another operation (and another -- there's always more skin where the last redundant chunk came from) would give me, or when the pants I liked in the store make my calf look like the thick end of a turkey leg, I take a deep breath, look at my pretty face in the mirror, and know that I can always cheat the angle with my camera, phone or toaster. I find a better pair of trousers, and love myself in them. In the end, I'd rather cheat the angle than punish my body any more. I'd rather cheat the angle than cheat myself.