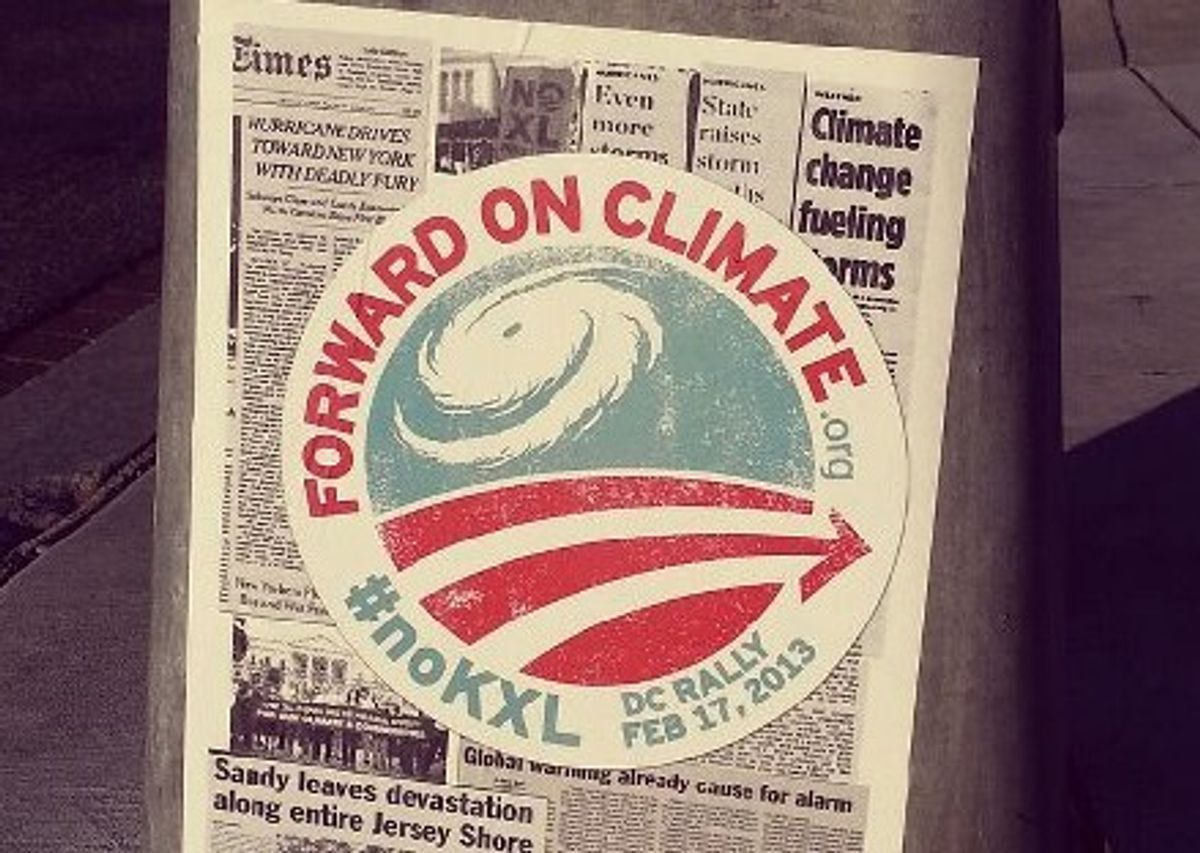 Updated, 4.00 p.m. EST: Nebraska Gov. Dave Heineman Tuesday signed off on the Keystone XL pipeline. The approval of the project is now squarely in the president's hands in, as the Guardian put it, "a litmus test of the administration's environmental credentials."

Original post: President Obama in his Inaugural address Monday vowed to "respond to the threat of climate change." After climate change remained a largely untouched subject during his presidential campaign, environmentalists were pleased by the prominence environmental issues held in Obama's speech. On Sunday night, in a surprise appearance at the Green Ball in D.C., Joe Biden told environmental groups gathered, "Keep the faith."

However, faith in the president's promises will meet its first serious test early this year. Obama must decide whether to approve the Keystone XL pipeline, which will carry crude oil from Alberta’s tar sands to the Gulf Coast, while producing high levels of carbon emissions, disturbing communities and adding to the coffers of oil magnates the Koch brothers.

During the  election year Obama delayed deciding on the pipeline, but analysts believe the president will eventually approve the Keystone XL extension. Climate activists see his decision over the pipeline as key: ‘‘Starting with rejecting the Keystone XL pipeline, the president must make fighting global warming a central priority,’’ Margie Alt, executive director of Environment America, told the AP Tuesday.

According to the New York Times, the "centerpiece" of Obama's environmental policy efforts  will be "action by the Environmental Protection Agency to clamp down further on emissions from coal-burning power plants under regulations still being drafted — and likely to draw legal challenges."

The Times notes too that the administration will adopt "new energy efficiency standards for home appliances and buildings, a seemingly small advance that can have a substantial impact." But whether in his second term Obama will take on Big Oil is another question entirely, and one his decision over the TransCanada-owned Keystone XL pipeline will begin to answer.

DeSmog Blog research fellow Steve Horn pointed out on Monday that the president has hardly distanced himself from oil giants. Indeed, Exxon Mobil, the Hill discovered, donated $260,000 to the Inauguration fund. Horn wrote:

For a corporation with financial wealth of this magnitude and one that, to boot, evades paying taxes, $260,000 is truly a "drop in the bucket." And yet in a political system favoring those who can "pay to play," it's a true game-changer in terms of gaining direct access to the administration.

However, given the political climate, many environmentalists were pleased that Obama even acknowledged climate change in his speech Monday. ‘‘He finally had the courage to acknowledge the words ‘climate change,'’’ Andrew Hoffman, director of the Erb Institute for Global Sustainable Enterprise at the University of Michigan, told the AP. If acknowledgment is considered a victory for environmentalists, the fight to seriously curb climate change with policy in this country has barely started.

Meanwhile, a study issued by the World Economic Forum (WEF) this week showed that world governments must spend $700 billion a year to curb reliance on fossil fuels. But as the Times noted, "Obama has little prospect of winning as much money for clean energy as he did in his first term, with Republicans now in control of the House."