What do the Beltway moderates actually want? 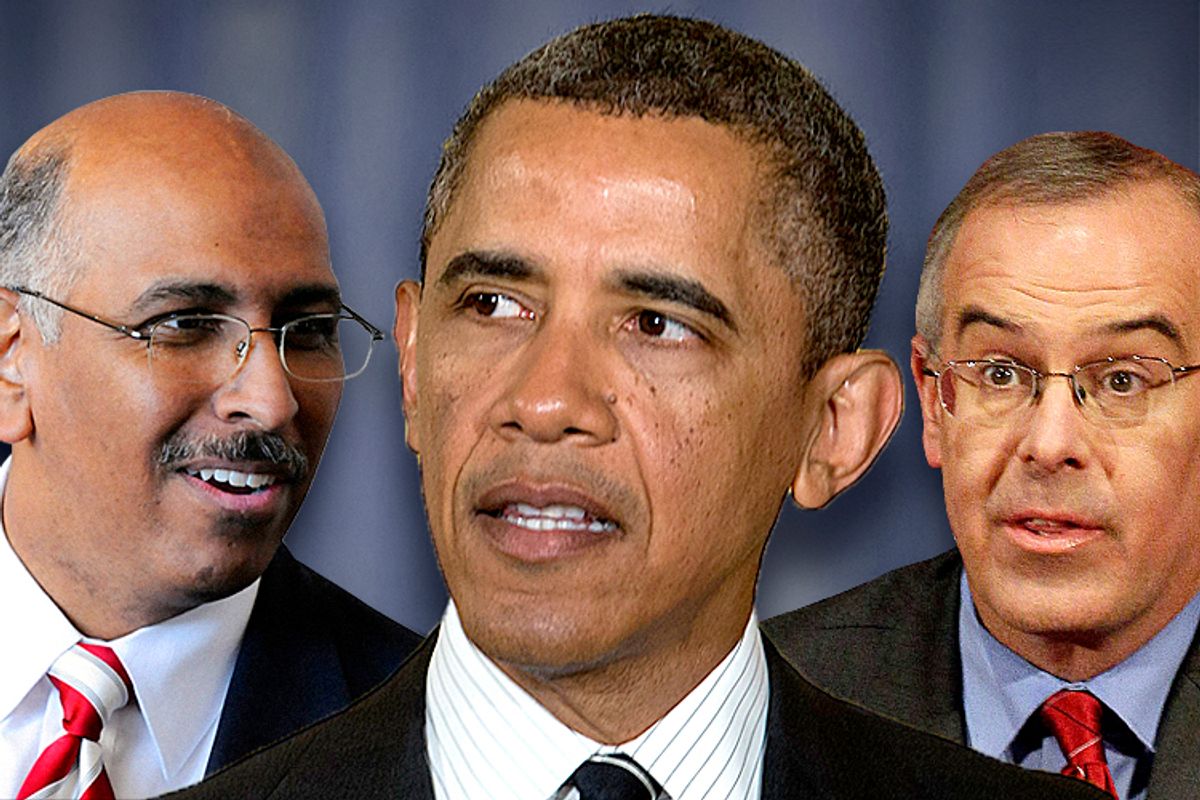 As David Brooks taught us last week, Barack Obama's cunning plan to sabotage and undermine the Republican Party is to repeatedly force them to act as extremist and irresponsible as possible by proposing popular and sensible things that they refuse to support. By advocating gun control and immigration reform, two things Obama supports because he and most liberals believe them to be morally and politically necessary, Obama is tricking Republicans into revealing that they are dysfunctional, leaderless, and increasingly divided into two camps: the all-out crazies and the merely corrupt. This saddens David Brooks, naturally, because most things seem to sadden David Brooks, America's Foremost Humility Expert.

But as the president begins his second term, I thought it'd be useful to try to figure out what "moderate Republican" columnists and "pox on both houses" centrists actually want the president to be doing.

How would we go about identifying the sorts of policies that would qualify as bipartisan, uncontroversial and capable of uniting America around a common goal again? Well, there are Brooks' suggestions, which are mostly things Barack Obama has already repeatedly announced his support for. As Jonathan Chait pointed out, these suggestions are either things that have already been done or things that Republicans would just not support if Obama proposed them again.

We could also look, for guidance, to longtime Washington insiders Lanny Davis and Michael Steele, who have been fulsomely praised by much of the Beltway press for putting aside their political differences and joining together to ... make a lot of money as lobbyists. Their "strategic communications" firm. ("Strategic communications" is P.R.-speak for "doing P.R. for politicians, athletes, corporations, institutions or dictators that have recently been discovered to have done something unbelievably horrible.")

Recently, Davis and Steele were interviewed -- for the five-hundredth time, I believe -- by Howard Kurtz, at a nuclear industry-sponsored "breakfast-cum-panel discussion titled 'The Media and Beltway Gridlock.'" It took place, appropriately, on K Street, which is to lobbying what Fleet Street is to British newspapers. Usually in Washington the alternative to "gridlock" is "policy crafted according to the wishes of groups rich enough to hire people like Lanny Davis and Michael Steele."

Davis contended media outlets aren’t doing enough to cover the areas on which Republicans and Democrats find common ground. He asked Kurtz whether he can get “column inches” for such stories, to which Kurtz replied that he can get column inches for any damn story he likes.

Yes, the media never covers the times when Democrats and Republicans all agree on stuff, and that is why no one knows we invaded Iraq. (Though, to be fair, no one -- outside of the Internet -- did really cover our most recent bipartisan success story, the reauthorization of the FISA Amendments Act.)

And what three policy areas did Lanny Davis identify as "common ground" between the parties? Immigration reform, gun control and global warming. Three issues, that is, that effectively define the wildly different domestic policy priorities of the current Democratic and Republican parties.

Rich, moderate Republicans support immigration reform. The party itself does not, as George W. Bush learned. Gun control is "bipartisan" in the sense that a large number of Democrats share the entire Republican Party's fanatical opposition to it. Republicans do not believe global warming is real, and even if they did they would not support any measures to halt it. (Though Davis simply brought up global warming to pimp nuclear power -- did I mention who sponsored this little breakfast panel?)

Of course, if the rich, moderate Republicans want to actually accomplish "bipartisan" problem-solving legislation, they are focusing all of their attention on the completely wrong person. The problem is that the Republicans in the House are effectively a leaderless band of radical malcontents with no clue how to effectively pursue their horrible goals. As Dan Drezner writes:

Like the revolutionaries in Stephen Walt's Revolution and War, the current crop of GOP elites seem to believe that loud, repeated affirmations of their preferences will simply and eventually steamroll Barack Obama, the Democratic Party and the American people into acceptance of their policy platform. One would have thought that the aftermath of the 2011 debt ceiling fight, the 2012 election, the fiscal cliff negotiations, and the superstorm Sandy relief bill would have led to some earning. But it hasn't. And that's the scariest fact of all.

The one topic all good centrists and moderates agree on is deficit reduction. Specifically, it has to be deficit reduction accomplished by cutting Social Security and Medicare. And that would be accomplished in 10 minutes if the GOP hadn't decided that it made more sense to wish very hard for severe social insurance cuts than to actually pass the less-severe ones the Democratic president effectively offered to give them.

In other words I guess I am pro-gridlock, if it means people like David Brooks, Lanny Davis and Michael Steele don't get their way.