Are banks too big to jail? 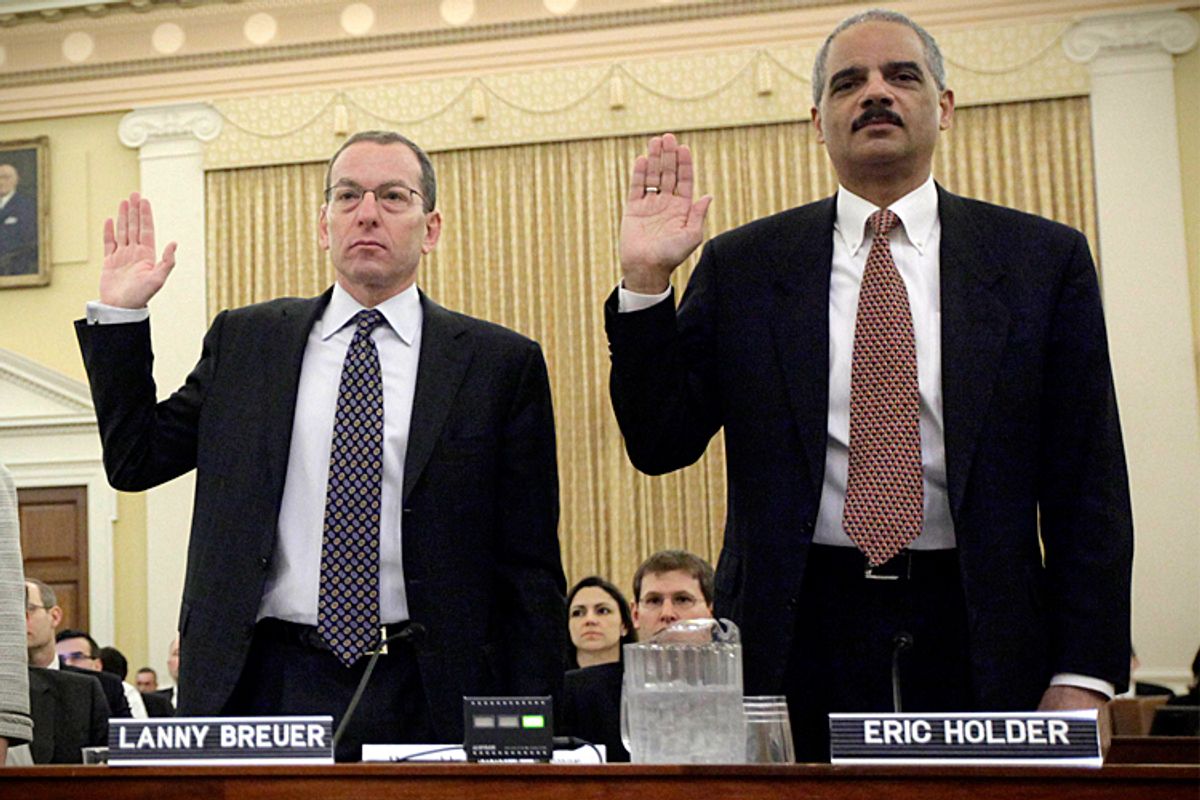 PBS Frontline's stunning report last night on why the Obama administration has refused to prosecute any Wall Streeter involved in the financial meltdown doesn't just implicitly indict a political and financial press that utterly abdicated its responsibility to cover such questions. It also -- and as importantly -- exposes the genuinely radical jurisprudential ideology that Wall Street campaign contributors have baked into America's "justice" system. Indeed, after watching the piece, you will understand that the word "justice" belongs in quotes thanks to an Obama administration that has made a mockery of the name of a once hallowed executive department.

The Frontline report is titled "The Untouchables," a tongue-in-cheek salute to how that term once referred to those heroes who fought organized crime and yet now appropriately describes those doing the criminal organizing. Rooted in historical comparison, it contrasts how the Reagan administration prosecuted thousands of bankers after the now-quaint-looking S&L scandal with how the Obama administration betrayed the president's explicit promise to "hold Wall Street accountable" and refused to prosecute a single banker connected to 2008's apocalyptic financial meltdown.

The piece by PBS reporter Martin Smith looks at how Obama has driven federal prosecutions of financial crimes down to a two-decade low. It also documents the rampant and calculated mortgage securities fraud perpetrated by the major Wall Street banks, who, not coincidentally, were using some of the profits they made to become among President Obama's biggest campaign donors.

As we see, that campaign money didn't just buy massive government bailouts of the banks, a pathetically weak Wall Street "reform" bill or explicit reassurances from Obama's campaign that the president would refrain from criticizing bankers. Frontline shows it also bought a Too Big to Jail ideology publicly championed by the white-collar defense lawyer turned Obama prosecutor Lanny Breuer.

In the single most damning part of the PBS report, we learn that Breuer, fresh off a lucrative stint defending Moody's and Halliburton, was appointed by President Obama to head the Justice Department's criminal enforcement division and was soon sculpting this unprecedented ideology and embedding it into the department's mission. As Frontline shows, he bragged to his colleagues in the legal profession that as the United States government's chief criminal prosecutor, he is not primarily worried about lawbreaking in the financial world, but about whether prosecuting financial crime will harm the criminals, their accomplices and their industry.

As this excerpt from Breuer's 2012 speech to the New York City Bar Association shows, that characterization of Breuer's declarations is not an overstatement (emphasis added):

To be clear, the decision of whether to indict a corporation, defer prosecution, or decline altogether is not one that I, or anyone in the Criminal Division, take lightly. We are frequently on the receiving end of presentations from defense counsel, CEOs, and economists who argue that the collateral consequences of an indictment would be devastating for their client. In my conference room, over the years, I have heard sober predictions that a company or bank might fail if we indict, that innocent employees could lose their jobs, that entire industries may be affected, and even that global markets will feel the effects....

I personally feel that it’s my duty to consider whether individual employees with no responsibility for, or knowledge of, misconduct committed by others in the same company are going to lose their livelihood if we indict the corporation. In large multi-national companies, the jobs of tens of thousands of employees can be at stake. And, in some cases, the health of an industry or the markets are a real factor. Those are the kinds of considerations in white collar crime cases that literally keep me up at night, and which must play a role in responsible enforcement.

Save for the intrepid Marcy Wheeler and now Frontline, this speech received almost no news media attention despite being arguably one of the most important statements to come from a top law enforcement official in recent history.

The highlighted parts of that speech are what is so significant. In them, Breuer is saying that enforcing the law should not be -- and no longer is, in the Department of Justice -- prosecutors' chief priority. Rather, he says listening to Wall Street’s economic arguments about the alleged cost of stopping and/or punishing lawbreaking should be.

Before you say that Breuer is just being a kind, compassionate guy, remember that the foundational notion of equal justice under the law is not supposed to be kindness or compassion. It is supposed to be blindness -- specifically, blindness to a person's stature and station, regardless of whether that person is a single human or a corporation. Even though that principle has never been applied perfectly (to say the least), the government is supposed to at minimum rhetorically honor its ethos.

Yet, here you have the Obama administration via its chief prosecutor setting the precedent for exactly the opposite: namely, a government that brags that when it comes to Wall Street, justice is not -- and should not -- be blind. Instead, as Breuer demands, prosecutors should be "kept up at night" worrying primarily about how an enforcement action will affect bankers who break laws and harm millions of Americans.

That's not nice or compassionate, that's a corporate defense attorney paying back the banking industry whose campaign contributions installed his boss in the White House and, consequently, him at the top of the Justice Department.

To understand how revolutionary a notion the Obama administration's Too Big to Jail is, do the mental exercise of switching out the pinstriped Wall Street criminals and replacing them with your mental image of the leaders of drug cartels. They, too, head multinational businesses involving scores of front companies and, thus, thousands of people who may not even know that they are participating in an illegal enterprise. If Breuer applied the very same Too Big to Jail ideology to those cartel leaders, he would be effectively arguing that we shouldn't prosecute Pablo Escobars because that would result in an unacceptable loss of wages for those kingpins' secretaries, messengers and secondary workforces.

If such a hideous legal argument about drug cartels was ever even whispered by any official in Washington, you would expect it to be grounds for congressional hearings, if not full-on impeachment proceedings accusing said official of jeopardizing U.S. national security. And in many cases it would be -- except, of course, if the drug dealers in question were somehow connected to the financial industry's profits. After all, it was Breuer who sculpted the Obama administration's settlement with megabank HSBC after the bank admitted laundering money for drug cartels and terrorist organizations.

In that decision not to criminally prosecute any HSBC executive who had enabled such laundering, Breuer explicitly cited the same radical Too Big to Jail principle aired in the PBS Frontline report. He said: "Our goal here is not to bring HSBC down, it's not to cause a systemic effect on the economy, it's not for people to lose thousands of jobs."

For pure adversarial and investigative journalism horsepower, the PBS Frontline piece rivals Bill Moyers' epic PBS indictment of those charlatans who enabled the Bush administration's march into the Iraq War. It is a must-watch in the truest sense of the overused term because it so powerfully explains how Obama's campaign motto of "change" meant something entirely different than what many thought. In the case of financial crime, it meant the embrace of a radical Too Big to Jail ideology, one that creates a moral hazard, encourages exactly the same kind of crimes and therefore makes it more likely that another financial meltdown will happen.

UPDATE: A mere hours after the PBS Frontline piece aired, Lanny Breuer just announced he is resigning his post at the Justice Department. Meanwhile, PBS reporter Martin Smith just reported that in response to his report, the Obama White House has decided to block access to Frontline reporters in their future reporting.