Hillary faces down the angry men

From simpleton Ron Johnson to delusional Rand Paul, GOP senators swung at the Secretary of State and hit themselves 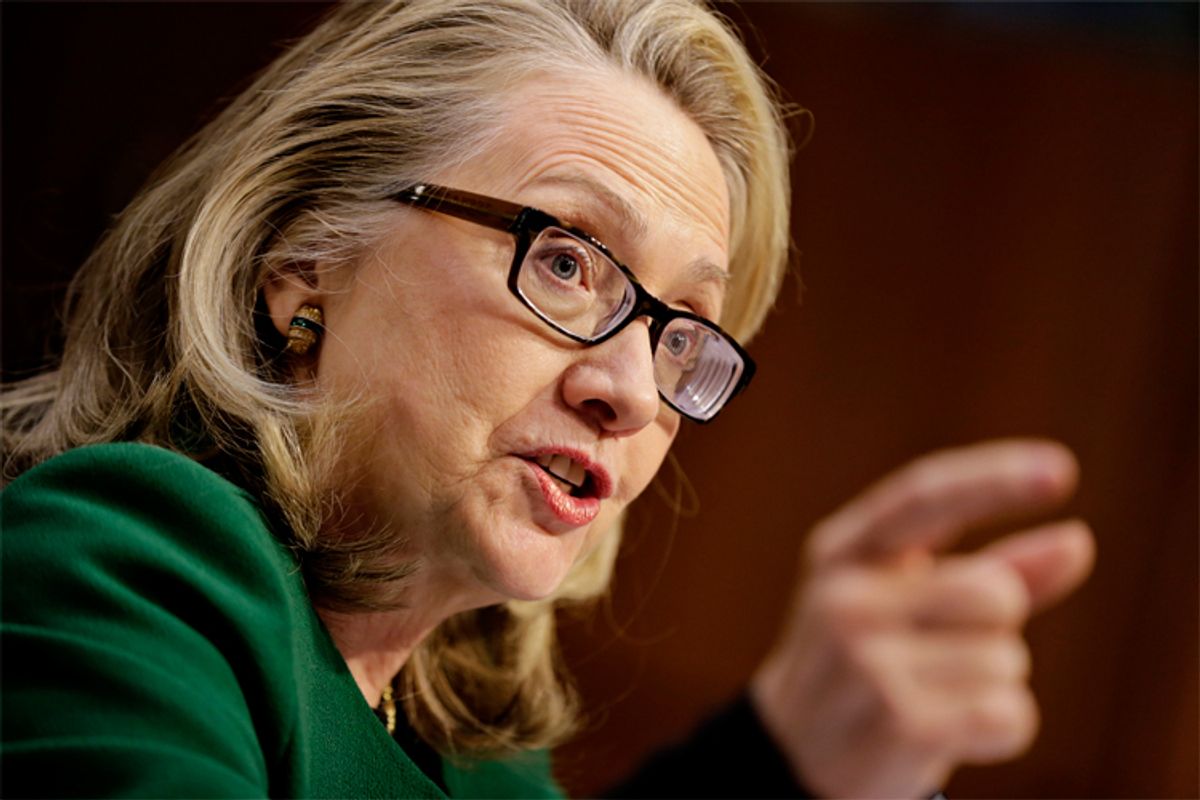 Three weeks after her release from a New York hospital with a blood clot on the brain – a health emergency mocked on the right as “Benghazi flu” -- Secretary of State Hillary Clinton gave Senate Republicans their day of rage over the Sept. 11 Benghazi killings on Wednesday.

From the intellectually underwhelming Ron Johnson of Wisconsin to the ever-angrier John McCain, with cameos by unimpressive 2016 hopefuls Rand Paul and Marco Rubio, Clinton stood up to the raging bulls with grace and fire of her own.

The stature gap between Clinton and those possible 2016 rivals – OK, nobody’s announced they’re running, but I couldn’t help thinking about it – was enormous. When Rand Paul huffed “had I been President at the time and I found that you did not read the cables [from Benghazi] I would have relieved you of your duties,” it wasn’t intimidating but funny. President Rand Paul? Try to say that without laughing.

Steely yet sometimes emotional, Clinton defended the State Department’s handling of the Benghazi story while not denying the underlying Libyan unrest or security troubles that caused it.

“For me, this is not just a matter of policy, it’s personal. I stood next to President Obama as the Marines carried those flag-draped caskets off the plane at Andrews,” she said in her introduction, with her voice breaking. “I put my arms around the mothers and fathers, the sisters and brothers, the sons and daughters, and the wives left alone to raise their children.”

After that, she was lectured and hectored by guys who don’t quite measure up to her and never will. Clinton spent almost as much time answering for Susan Rice’s now world-historical Sunday show appearances Sept. 16 as she did talking about what happened at the compound and her own leadership decisions.

On a morning in which senators vied for the worst moment, Tea Party darling Ron Johnson of Wisconsin stood out. “A very simple phone call to these individuals I think would have ascertained, immediately, that there was no protest prior to this…it was an assault,” he told Clinton condescendingly. The fact that Johnson could envision “a very simple phone call” in the wake of the Benghazi carnage – has he even seen photos of the devastated compound? – shows that he’s a very simple man when it comes to foreign policy.  Johnson’s entire point was to ask, again, about Rice “purposely misleading” the Sunday shows five days after the attack.

Clinton began by pointing to the mayhem in the wake of the devastation, with an agent still recovering at Walter Reed and the FBI moving to gather information in an investigation that’s ongoing. "Senator, when you're in these positions, the last thing you want to do is interfere with any other process going on," she told Johnson, to which he replied:

"I realize that's a good excuse,” but Clinton corrected him.

With all due respect the fact is we had four dead Americans. Was it because there was a protest or was it because there were guys who went out for a walk one night who decided they would kill some Americans? What difference at this point does it make? It is our job to figure out what happened and to do everything we can to make sure it never happens again.

McCain remained unhappy, calling Clinton’s answers “not satisfactory to me” and harrumphing “The American people deserve to know answers, and they certainly don’t deserve false answers,” McCain said. It sort of sounded like he was calling Clinton a liar. (On second viewing: Clinton did a great job disarming McCain, a little, with warmth, replying calmly: “I understand your very very strong feelings. You knew Chris [Stevens], you were one of the staunchest supporters of the effort to dislodge [Moammar al-Qadaffi] and try to give the Libyan people a chance. And we just have a disagreement. We have a disagreement about what happened, and when it happened and with respect to explaining the sequence of events.")

Florida’s Marco Rubio was at least respectful, and asked an actual question about compound security rather than merely grandstanding. But he looked junior and not quite ready for prime time one on one with the secretary of state.

Did we learn anything from the hearing about what happened Sept. 11, and underlying security problems at the compound? Not really. Clinton told the senators that she hadn’t been told about cables asking for more security, but Admiral Mike Mullen already testified the same thing last month. She confirmed that a suspect had been released by the Tunisian government but remained under watch. Yet there was far more interest in pursuing what Susan Rice knew and when she knew it than probing what the Benghazi attack revealed about our strategy and standing Libya or the Middle East.

But we did learn something about politics from Wednesday’s Senate tableau: the rules of the game are changing for women in public life and politics. We’re not supposed to get weepy, or lose our temper; Clinton did both during the hearing and got praise for her sincerity and her righteous anger.

Has she put the Benghazi controversy behind her, in the event that she decides to run for president in 2016? Given the craziness of the GOP, it’s hard to say. Rand Paul made sure to get on the record that “you accept the culpability for the worst tragedy since 9/11, and I really mean that.” Alrighty then. But I can say with certainty: Clinton has a far better chance of becoming president than Rand Paul ever will, no matter what happens on Benghazi.

As I write, Clinton is still testifying to a House committee on Benghazi. She's already rapped them for embassy security cuts in recent budgets. If any news breaks, I'll update this post.