I married my sorority sister

I went through rush hoping to meet boys and make new friends. I never imagined I'd find a wife 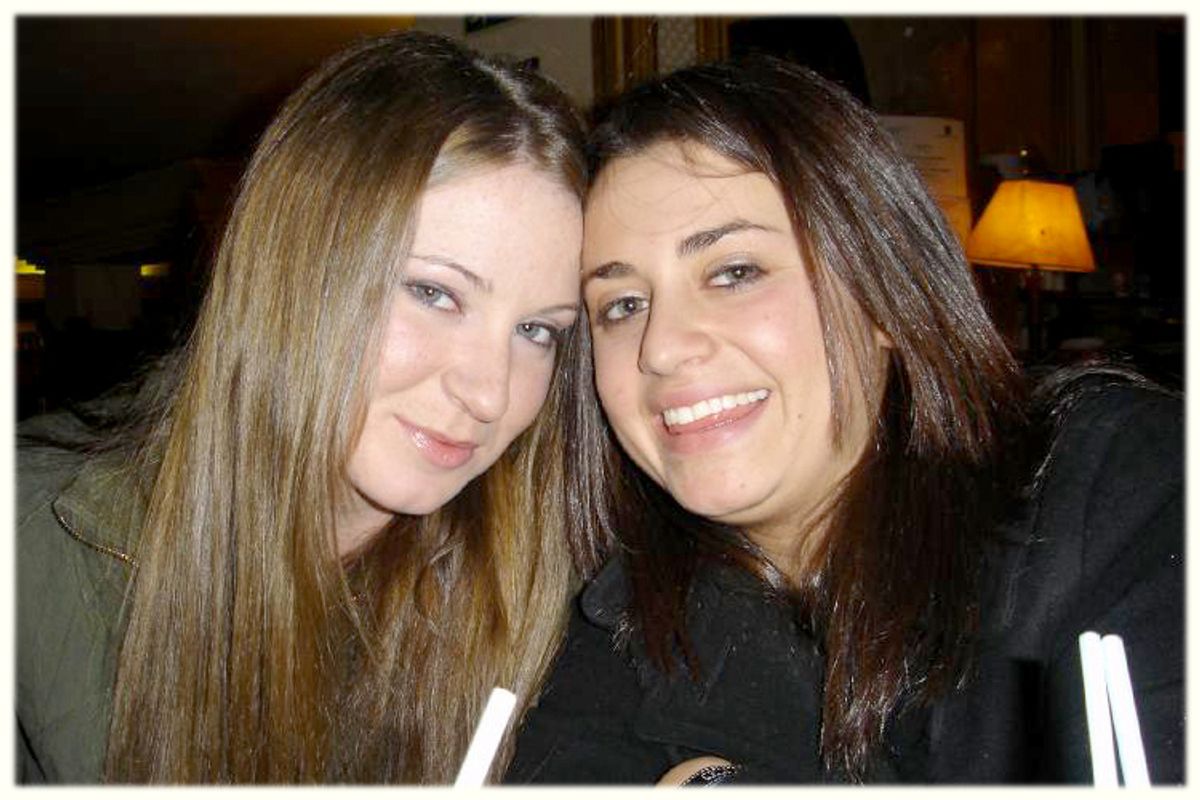 A photo of the author, left, with her fiancee and sorority sister, Sam
--

When people ask how Sam and I met, I almost never tell them the entire story – that I was Sam’s big sister in a sorority. I still feel ashamed of that detail, as if I did something wrong by falling for her, or I took advantage of her in some way. So I keep my answer simple. I tell them we met in college.

I never planned to pledge a sorority. I went to Emerson to be around nerdy artistic kids in an urban setting, but I arrived to find the small liberal arts school lacking in a party atmosphere of any kind. Where we had mocktails and screenings of Charlie Kaufman films, I wanted red plastic cups and basement make-outs. In that first week, I was lonely and tired of sitting by myself in the dining hall. I missed my friends from back home. So when a girl from my dorm asked me to go to a sorority rush event, and I found myself in a roomful of girls who talked about parties and boys and looked so comfortable together, I desperately wanted to belong. I attended more rush week events, hoping to meet a few girls I could call my friends. I never thought I’d meet the girl I’m going to marry.

Before Emerson, my closest encounter with lesbians was kissing a friend on a drunken dare. I’d only ever been interested in guys. My teenage years as an insecure and unsophisticated Long Island girl — who was not only a foot taller than most boys in school, but who spent much of my time listening to Enya and writing in my journal — didn’t prove to be particularly fruitful when it came to getting noticed or falling in love. But the sorority didn’t just offer me dining companions. I now had a group of girls I could hit the bars with. Our sorority was 100 percent boy-crazy. (Well, maybe not 100 percent.) Some nights we would head out to Boylston Street and none of us would wake up in our own beds. Boston’s bars offered up a variety of college guys and older men. I was waiting to meet a tall guy with a scruffy face and a big dog. Maybe he’d even drive a Jeep Wrangler. Like most of the other girls, I passed the time with whoever looked cute and seemed interested. I’d never been in a real relationship, and at 19, I was scared of being vulnerable. I kept things casual.

I met Sam at the start of my sophomore year, my first time holding rush events as a full-blown sister. Sam was a transfer student from Florida who’d experimented with boys, girls and drugs, and she was paired with me as my Little Sister. On the surface, we didn’t have much in common: She had too many piercings and a lack of respect for the sisters. But I knew there was something different between us. If I stayed over at her apartment she wouldn’t sleep in the same bed as me. She’d make plans with other girls and wouldn’t invite me. She says this was her way of flirting, but I never caught on. I worried that she didn’t like me. Still, she would remember little things I told her – like how, if you stood in a certain spot on Boylston Street, the John Hancock tower looked one-dimensional. After a few months of being around her I knew that I didn’t feel the same around Sam as I felt around the other girls. When Sam touched me, my skin burned. When she looked at me I felt completely exposed, and the lingering scent of crisp fruits and fresh florals from her perfume — Ralph Lauren Cool — made me dizzy.

The old college cliché of girls experimenting with girls exists for a reason, but I didn’t want to experiment with Sam. I didn’t want to be anywhere near her, because my attraction to her terrified me. When a group of us went out to a bar one night, Sam went home with one of my suitemates. Sam tells me that it was casual, and that she knew I wasn’t ready. But I felt like she was making a bold statement. When I arrived back at the dorms, terrified and full of vodka, I pounded on the doors. Sam says I kissed her. I say she kissed me. But in all my years of kissing nothing had ever come close to this bipolar feeling of comfort and panic. I didn’t tell a soul.

Gossip soon ran rampant throughout the sorority. My friends only approached the subject when we were drinking, and my tactic was total denial. It was only a month later that I left for a semester abroad in the Netherlands with some of my friends from the sorority. I was relieved that I could deal with these feelings from 3,500 miles away. We could have a secret long-distance affair. But when my two best friends and I planned a trip to Madrid, Sam asked to come meet me there. I knew I had to tell my friends, that I couldn’t continue to lie. I wrote them both a letter. I tried to explain everything, but when I handed it to them with shaking hands, the pages fell all over the floor and got mixed up. While I was off having a panic attack in solitude the girls were trying to match up their pages. When I returned an hour later there was a sappy group hug and they asked me if I was in love. When I nodded my head, they just smiled. I thought they would be mad at me for lying; instead they understood how much anxiety this secret had caused me.

I didn’t tell anyone else. My fear wasn’t just imminent heartbreak; I was afraid of being gay. I certainly didn’t feel like a “real” lesbian. In high school, I had lusted after boys. It was boys I’d once been too shy to talk to. Mine wasn’t the kind of gay struggle I saw on TV and in books — the struggle I saw many of my peers’ faces — one marked by angst and repression. My teenage years looked the same as those of every other girl who just wanted to feel pretty. I spent my whole life until now thinking I would end up with a tall, dark-haired man. How did I fall for a short, dark-haired girl?

But I kept falling. In Madrid, Sam and I spent a night alone in her hotel room and all we did was kiss. I was new at this, and waiting for her to make the first move. We held hands in the Museo Reina Sofía and stared at Guernica. She gave me a necklace on our last night as we sat by a fountain. She told me she loved me. I believed her. I cried when we said our goodbyes the next morning. For the remaining months our relationship subsisted on patchy phone calls and infrequent postcards.

A week before my flight home, Sam called to tell me that she’d cheated on me. I tried to avoid her when I got back to Boston, but she was my sorority sister. She was everywhere I went. I told her to stay away from me, but it was because I didn’t trust myself around her. She never left me alone, no matter how many times I demanded it.  We spent the next two years of college on and off with each other, and in November 2006, the fall of our senior year, we decided to give this relationship one real and final chance. I was still scared of my feelings for Sam. But above all I was scared of ignoring them.

During the time when Sam and I weren’t together, I didn’t even consider dating another girl. My friends asked me questions about my sexuality, and their brothers made lesbian jokes. Sometimes I wanted to be gay just so I could have answers for everyone else. When I finally told my mom about Sam it wasn’t to come out as a lesbian; I just needed to cry to her, like any girl suffering her first broken heart. She was supportive, but I think she was hoping this was a phase. She asked about boys even more after that.

But it wasn’t a phase. Last year, Sam asked me to marry her, and now we’re planning our wedding. Even now, neither one of us truly identifies as a lesbian, but we live in a society of labels and we’re aware of what our marriage means for our future: We are the lesbian friends, the lesbian neighbors, and we will be the lesbians at the school bake sales. When I find myself afraid of the prospect of both being and having a wife, I remind myself that I get to face all of these challenges with Sam. I get to marry the first and only person I have ever loved. I’m certainly not the first woman to fall in love with someone unexpected, and I wish I could tell my terrified 19-year-old self, sulking in my dorm room, that there would come a day when my mom would call Sam more often than she calls me, that someday both of our fathers would stand up in front of our close friends and family and make engagement toasts, and that I would be sending both my grandfathers save-the-dates for our upcoming wedding. Our family may not always understand, but they never stop loving us.

Maybe it’s time to stop skipping the details when people ask how Sam and I met. Everyone who matters to us knows our story, so maybe it’s time we start to tell it. We met in our college sorority. If we ever have a daughter, she’ll be the ultimate legacy.

Laura Leigh Semon is a second-year MFA student at the New School who works in publishing and writes about her strangely normal life. She is blogging about her experience planning a lesbian wedding at 2brides2be.com.