Military has to decide which combat jobs for women 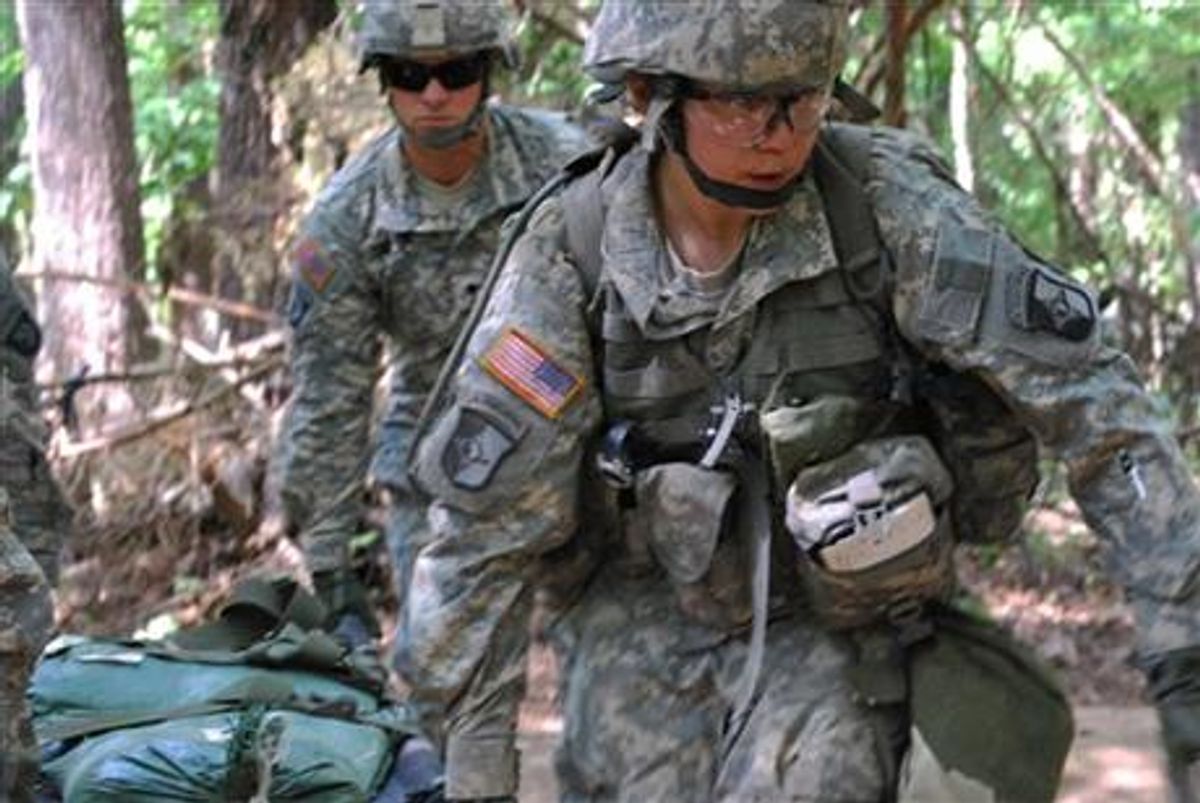 WASHINGTON (AP) — The Pentagon's decision to lift the ban on women serving in combat presents a daunting challenge to top military leaders who now will have to decide which, if any, jobs they believe should be open only to men.

Defense Secretary Leon Panetta is expected to announce Thursday that more than 230,000 battlefront posts — many in Army and Marine infantry units and in potentially elite commando jobs — are now open to women. It will be up to the military service chiefs to recommend and defend whether women should be excluded from any of those more demanding and deadly positions, such as Navy SEALs or the Army's Delta Force.

The historic change, which was recommended by the Joint Chiefs of Staff, overturns a 1994 rule prohibiting women from being assigned to smaller ground combat units.

The change won't take place overnight: Service chiefs will have to develop plans for allowing women to seek the combat positions, a senior military official said. Some jobs may open as soon as this year, while assessments for others, such as special operations forces, may take longer. The services will have until January 2016 to make a case to that some positions should remain closed to women.

Officials briefed The Associated Press on the changes Wednesday on condition of anonymity so they could speak ahead of the official announcement.

There long has been opposition to putting women in combat, based on questions of whether they have the necessary strength and stamina for certain jobs, or whether their presence might hurt unit cohesion.

But as news of Panetta's expected order got out, many members of Congress, including the Senate Armed Services Committee chairman, Sen. Carl Levin, D-Mich., announced their support.

"While their focus must remain on winning the battles and protecting their troops, they will now have the distraction of having to provide some separation of the genders during fast moving and deadly situations," said Boykin, a retired Army lieutenant general. He noted that small units often are in sustained combat for extended periods of time under primal living conditions with no privacy.

Panetta's move comes in his final weeks as Pentagon chief and just days after President Barack Obama's inaugural speech in which he spoke passionately about equal rights for all. The new order expands the department's action of nearly a year ago to open about 14,500 combat positions to women, nearly all of them in the Army.

In addition to questions of strength and performance, there also have been suggestions that the American public would not tolerate large numbers of women being killed in war.

Under the 1994 Pentagon policy, women were prohibited from being assigned to ground combat units below the brigade level. A brigade is roughly 3,500 troops split into several battalions of about 800 soldiers each. Historically, brigades were based farther from the front lines, and they often included top command and support staff.

The necessities of combat in Iraq and Afghanistan, however, propelled women into jobs as medics, military police and intelligence officers that were sometimes attached — but not formally assigned — to battalions. So while a woman couldn't be assigned as an infantryman in a battalion going out on patrol, she could fly the helicopter supporting the unit, or move in to provide medical aid if troops were injured.

And these conflicts, where battlefield lines are blurred and insurgents can lurk around every corner, have made it almost impossible to keep women clear of combat.

Still, as recent surveys and experiences have shown, it will not be an easy transition. When the Marine Corps sought women to go through its tough infantry course last year, two volunteered and both failed to complete the course. And there may not be a wide clamoring from women for the more intense, dangerous and difficult jobs, including some infantry and commando positions.

Two lawsuits were filed last year challenging the Pentagon's ban on women serving in combat, adding pressure on officials to overturn the policy. And the military services have been studying the issue and surveying their forces to determine how it may affect performance and morale.

The Joint Chiefs have been meeting regularly on the matter and they unanimously agreed to send the recommendation to Panetta earlier this month.

A senior military official familiar with the discussions said the chiefs laid out three main principles to guide them as they move through the process. Those were to maintain America's effective fighting force, preserve military readiness and develop a process that would give all service members the best chance to succeed.

Women comprise about 14 percent of the 1.4 million active military personnel. More than 280,000 women have been sent to Iraq, Afghanistan or to jobs in neighboring nations in support of the wars. Of the more than 6,600 U.S. service members who have been killed, 152 have been women.

The senior military official said the military chiefs must report back to Panetta with their initial implementation plans by May 15.

Women In The Military