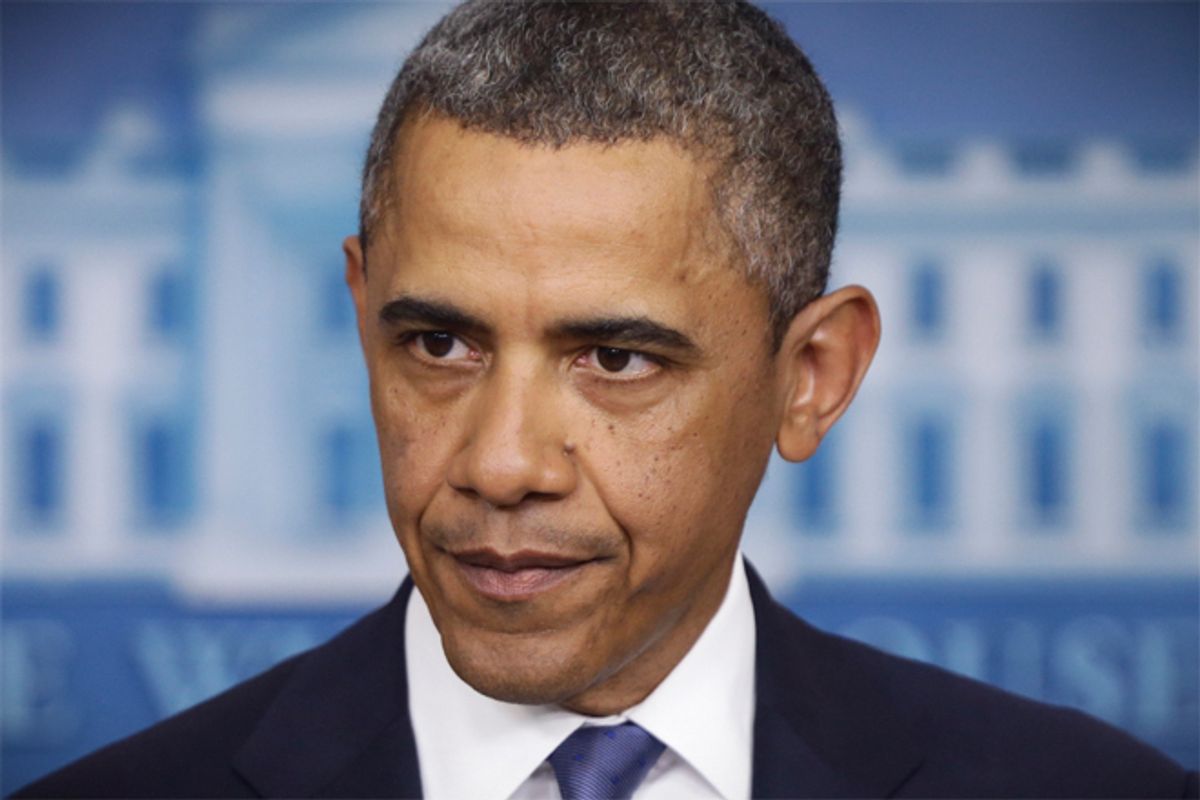 Since the moment I began researching my book "Hostile Takeover" at the end of George W. Bush's first term, I've been consumed with how America's political vernacular is subtly skewed to prefer certain legislative outcomes and preclude others.

We see it over here in the manipulation of the word "centrist" and we see it over there in how a loyal supporter of Pentagon spending is now portrayed as a radical peacenik budget cutter. We see it in the debate over social programs, where those committed to cutting Social Security are not only portrayed as working to strengthen the program, but also billed as "moderates" despite their position on the decidedly radical, not-moderate outskirts of public opinion.

We see it in how President Obama's inaugural speech is depicted as advocating a "leftist" agenda, despite polls showing that nearly every policy he advocated is supported by a majority of all Americans -- not just those on the left. And, no doubt, we see it in how the Obama administration labels its liberal critics "fringe" even though those critics who are advocating policies in the mainstream center of public opinion.

If my obsession wasn't obvious at first, it should be obvious now: Yes, indeed, I'm fixated on how this Orwellian scheme by the elite media, politicians, pundits and lobbyists constantly shifts the rhetorical boundaries so that political debates are narrowed to preference outcomes that serve monied interests. Why am I fixated? Because this scheme is as powerful a corrupting force in our politics as campaign contributions, yet unlike bundled checks and anonymous super PAC donations, this scheme goes almost completely unnoticed.

That, in fact, is the whole con's evil genius: Operating at the linguistic level it almost imperceptibly advances a pervasive form of corruption. Essentially, the scheme is predicated on the realization that special interests never have to buy congressional votes with bulging envelopes of cash; that is, they never have to engage in the kind of old-school corruption we frown upon. They never have to do this as long as their campaign contributions, financing of think tanks and ownership of media outlets guarantees that opinion shapers (pundits, politicians, activists, etc.) distort the entire political conversation -- distort it specifically to guarantee that only certain policy ideas will be considered Serious and that therefore only certain legislative votes will even occur in the first place.

The best way to understand how pernicious this propaganda system is and how it operates ubiquitously on a day-to-day basis is to look at examples that are less blatant and more pedestrian than the iconic ones mentioned above. For that, the framing of taxes serves as an ideal exemplar.

Take the recent and much-talked-about New York Times column by NPR's "Planet Money" host, Adam Davidson. As the S.H.A.M.E. Project previously reported, Davidson's personal financial ties to the banking industry make him a perfect avatar of the unseemly conflicts of interest now blurring the line between journalism and corporate propaganda. For the money he has been paid, Davidson has been a loyal media advocate of conservative economics - and his latest Times column floating a series of punitive -- or, in the economic lingo, "Pigovian" -- taxes is no exception.

While some of the levies he ponders (like the one aimed at traffic congestion) are a tad progressive, it is Davidson's general framing of taxes that so exquisitely captures how language is manipulated to tilt seemingly apolitical content in a conservative direction. Notice, in particular, this paragraph from his piece:

The idea of raising taxes to help society might sound like the ravings of a left-wing radical, or an idea that would destroy American industry. Yet the nation’s leading proponent of a Pigovian gas tax is N. Gregory Mankiw, chairman of President George W. Bush’s Council of Economic Advisers and a consultant to Mitt Romney’s 2012 campaign.

These are standard filler lines; in fact, they are likely familiar to you because you've read or heard some version of them before in the elite media discourse. But that's what makes the talking points so significant. They prove that even the most standard, lackluster, altogether mundane pabulum reeks of highly subjective, yet all-too-common conservative ideology.

Think critically about the message Davidson is actually transmitting in that paragraph: In the first sentence, he forwards the idea that it is perfectly natural -- even logical -- to assume that "raising taxes to help society" is an idea that could only be "the ravings of a left-wing radical." That, or an extreme proposal that would obliterate the entire private sector. Left unsaid is that most Americans -- and not just "left wing radicals" -- support slightly higher taxes, and that higher taxes under Bill Clinton did the opposite of "destroy(ing) American industry."

Then comes the even-more Orwellian second sentence, the one implying that the primary reason raising taxes should be considered even vaguely legitimate is because the economic adviser to George W. Bush says it is acceptable. Yes, that's right, in his telling, the idea of higher taxes is valid primarily because the ultraconservative whose tax proposals delivered the worst economic record in a generation deigned to deem it worthy. Implicit in the message is the idea that a liberal economist with a better record than Bush's economic guru would somehow not be considered legitimate in pushing a particular tax policy simply because that liberal is a liberal (or, in Davidson's hyperbolic terms, a "raving left-wing radical").

Before you call this kind of thing an isolated incident, recall that this fact-averse agitprop is the norm in tax reporting, as evidenced by the recent fight over extending the Bush tax cuts.

During the debate about President Obama's proposal to let a tiny bit of the those tax cuts expire, most reporters did exactly what Businessweek's Joshua Green did: They pretended that letting Bush tax cuts on income above $250,000 expire would deny "the rich" any tax cuts whatsoever. This, of course, was demonstrably untrue, as the Obama proposal's extension of tax cuts for all income below $250,000 still would have given the rich a big tax cut on their first $250,000 of income.

Despite that reality, however, the biased framing persisted. Indeed, wealthy reporters, campaign contributor-appeasing politicians and corporate lobbyists -- motivated by both personal financial self-interest and by Beltway groupthink/pack psychology -- kept portraying Obama's proposal as something it was not. That ultimately confused many voters and helped make the final agreement both more conservative and even less reflective of mainstream public opinion. Specifically, the lie that those making more than $250,000 would receive no tax cuts made Obama's whole proposal look too radical, thus laying the rhetorical groundwork for extending the Bush tax cuts for all income below $400,000, in the process reimagining that stratospheric income level as somehow "middle class."

I could go on and on with more examples, but you get the point: The argot of American politics is so rigged that we cannot even have a well-grounded conversation about major public policy issues.

That doesn't mean there is one one lonely Rasputin pulling all the strings, nor does it mean there is a grand linguistic conspiracy run by a handful wordsmiths in a smoky backroom (though said wordsmiths do certainly exist on K Street and in political consulting firms). Rather, it means that the political vocabulary has been so skewed for so long that many who speak the language don't even know that they are forwarding subjective and often wildly inaccurate assumptions. It also means that it is no coincidence that those particular assumptions at once serve the interests of those with money and ignore the interests of We the People.