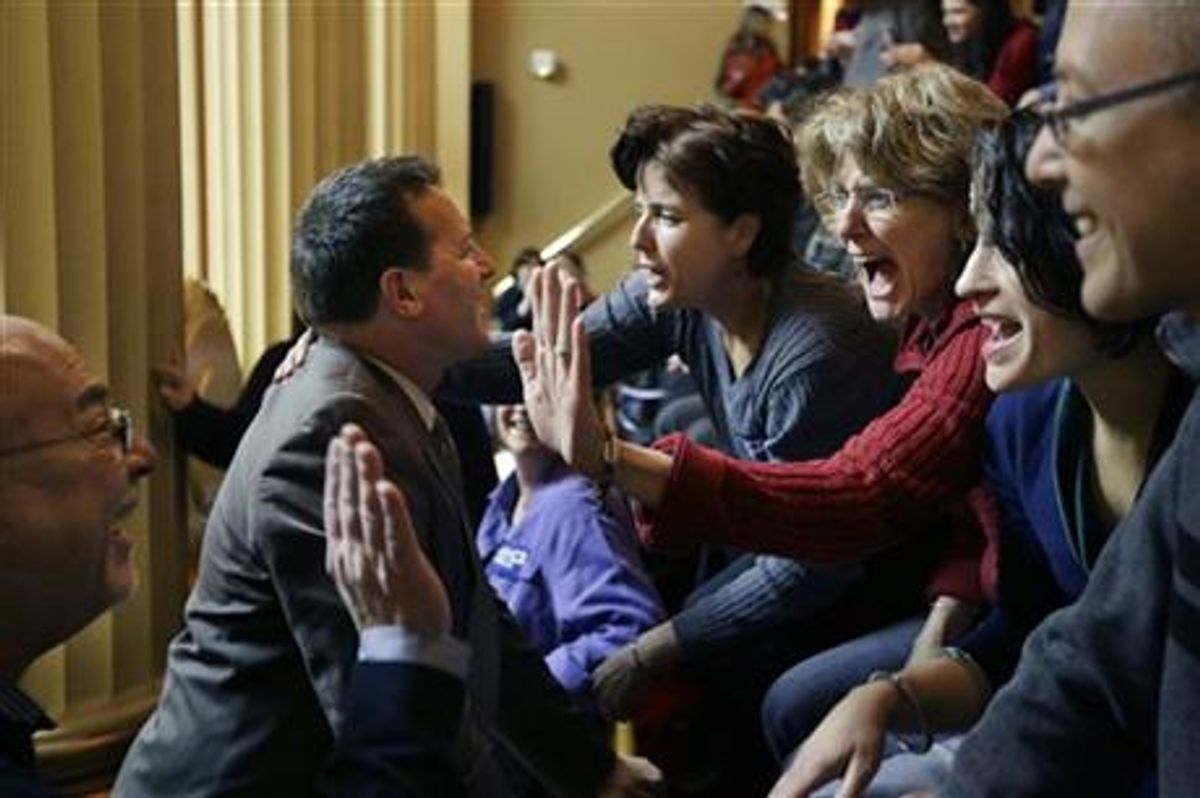 PROVIDENCE, R.I. (AP) — The fate of gay marriage legislation in Rhode Island could hinge on the exemptions it affords religious groups that oppose it, the state Senate president said Friday, a day after the House overwhelmingly passed the bill.

Teresa Paiva Weed said she remains opposed to the bill and has heard that the sticking point for many senators is on how broad of a religious exemption is included in the only New England state that doesn't allow same-sex marriage.

The Newport Democrat said she doesn't want to fast-track the legislation and promised a "full and fair debate" on what she said is a personal and emotional issue for many lawmakers. She made the comments during a taping of WJAR-TV's "10 News Conference."

She said she doesn't know whether there's enough support in the Senate to pass the legislation, which would make Rhode Island the 10th state to allow gay marriage.

"The debate and the discussion in the Senate will be very real, and neither I nor anybody else ... really knows what the final outcome of that will be," she said.

Paiva Weed said several senators have told her they want a more expansive religious exemption to protect religious leaders, churches, religious charities and organizations that do not support same-sex marriage.

In legislative testimony, a lobbyist for the Roman Catholic Church raised concerns that Catholic schools and charitable organizations could be forced to change employee benefit policies if compelled to recognize the same-sex spouses of employees.

The bill passed by the House states that religious institutions may set their own rules for who is eligible to marry within their faith and specifies that no religious leader can be forced to officiate at any marriage ceremony.

It's likely to be weeks or even months before the Senate Judiciary Committee holds hearings and a vote on the legislation. That's in stark contrast to the House, where House Speaker Gordon Fox followed through on his promise to hold a vote on gay marriage before the end of January.

Fox, a Providence Democrat, is gay. He dropped gay marriage legislation two years ago when he concluded it would not pass the Senate. Following Thursday night's 51-19 vote in favor of the legislation, Fox said he trusts the Senate to weigh the merits of the bill and dismissed concerns from some gay marriage supporters that Paiva Weed would use the issue in political horse-trading that often occurs at the end of the legislative session.

Gov. Lincoln Chafee, who supports gay marriage, urged the Senate to act on the legislation. The governor, an independent, argues that gay marriage is an issue of civil rights and the state's quality of life, and that Rhode Island is at a competitive disadvantage to other New England states that allow it.

"Now that the House has swiftly acted, I urge Senate leadership to 'call the roll' — for our economy, for our gay and lesbian friends and neighbors, and for history," he said in a statement.

Some opponents have suggested placing gay marriage on the ballot as a referendum, but the idea is a nonstarter with Fox and Chafee.