Facebook's CEO will raise money for a Republican? Did an earthquake just destroy Obama-loving Silicon Valley? 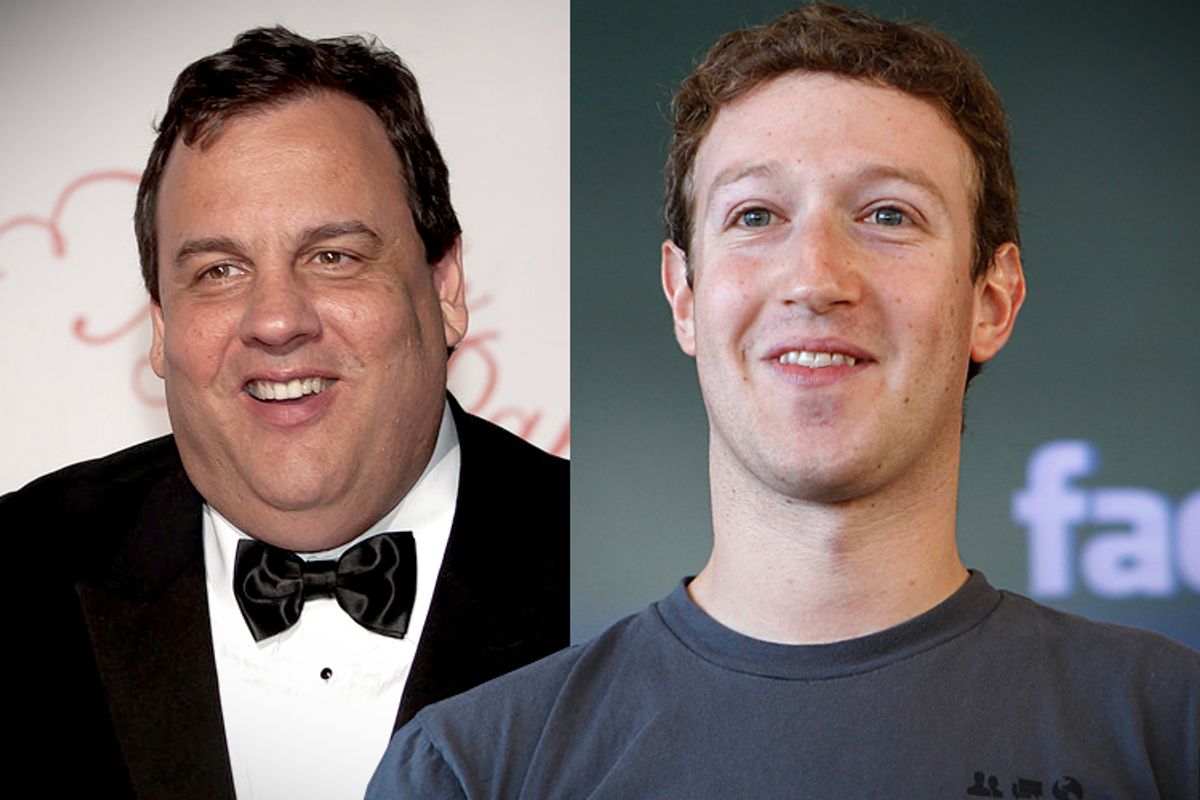 Besides oodles of money for an aspiring presidential contender, what exactly does it mean that Facebook CEO Mark Zuckerberg is hosting a fundraiser for New Jersey's Republican Gov. Chris Christie?

Silicon Valley, by and large, spends Democratic with its fundraising cash, and overwhelmingly voted for Barack Obama last November. The numbers brook no dispute. In the last presidential cycle, 91 percent of campaign contributions by Apple employees and 97 percent by Google employees went to Obama. In Santa Clara and San Mateo counties, Obama crushed Romney by margins of over 40 percent. The gap is so bad that Nate Silver even suggested it could potentially be blamed for the poor performance of Romney's campaign in the technological arena. The best geeks just didn't want to work for him.

So Zuckerberg's implied endorsement of a prominent Republican deservedly sends a shock through the political scene. What's a nice boy from Palo Alto doing raising money for a GOP politician who opposes gay marriage, has fought to stop Obamacare in New Jersey and regularly bashes public sector employees? Could this be a portent for the future, a sign that Silicon Valley is turning right?

It's always tempting to look for larger significance, but a review of Zuckerberg's Christie timeline offers a more straightforward explanation for how all this happened. The prime catalyst? Cory Booker -- the Democratic mayor of Newark.

In the summer of 2010, Zuckerberg pledged $100 million to help reform Newark's schools. Zuckerberg had no previous relationship to New Jersey. Cory Booker just happened to sit down next to him at a dinner table at the Allen & Co. retreat in Sun Valley, Idaho, an annual event at which billionaires and politicians gather to hobnob about the issues of the day. Zuckerberg's wife, Priscilla Chan, is a teacher, and what little we know about Zuckerberg's politics suggest that he has a sincere interest in education reform. This is something, incidentally, not at all uncommon among Silicon Valley executives, no matter what their political allegiance. Tech executives tend to think of themselves as problem solvers who embrace innovation. In their view, public education is broken in the United States. They'd love to fix it. And despite Valley liberalism, it is probably safe to say that the key elements of education reform in Newark -- charter schools, breaking the power of teachers' unions -- won't rankle the techies. Silicon Valley may be blue, but it is hardly a stronghold for organized labor.

Control over Newark's schools, however, resided with the state government, so any big reform project had to go through Christie's office. According to BusinessWeek and the New York Times, in the process of working out the details Zuckerberg, Christie and Booker got along famously. They announced the grant together on Oprah Winfrey's television show and have been in what seems like reasonably close touch ever since. The Wall Street Journal reported that Christie and his wife stayed with Zuckerberg during at least one visit to Facebook last year.

So Booker sat down next to Zuckerberg at a conference, and two and half years later, Zuckerberg is raising money for Christie. There's no tale to tell here of changing politics in Silicon Valley -- just a narrative of circumstance and chance. When Facebook spokesperson Sarah Feinberg says that "[Zuckerberg and Chan] admire [Christie's] leadership on education reform and other issues and look forward to continuing their important work together on behalf of Newark’s schoolchildren,” she may actually be telling the truth.

It's also worth noting that the higher you rise in the executive hierarchy of Silicon Valley tech companies, the less easy it is to predict your politics. EBay's CEO, Meg Whitman, is a Republican who unsuccessfully ran for governor of California. More to the point, Peter Thiel, one of the founders of PayPal, a big early investor in Facebook and an important mentor to Mark Zuckerberg, is a notorious libertarian who backed Ron Paul for president. Furthermore, Christie is hardly the kind of right-wing Tea Party politician that most Valley residents would view as anathema. He believes in climate change! He objects to Muslim bashing!

Which leads to perhaps the biggest takeaway from Zuckerberg's Christie fundraiser. Zuckerberg's politics are less important to this equation than Christie's. Chris Christie is the rarest of Republican leaders -- a politician in 2013 who has demonstrated some appeal across the aisle. As a warning shot signaling "electability" to Republican primary voters in 2016, Zuckerberg's endorsement might sound a little loud.