Mommy, can you put down your iPhone?

When I had a child, I swore I wouldn't be a distracted parent. Then I discovered: Babies are really boring 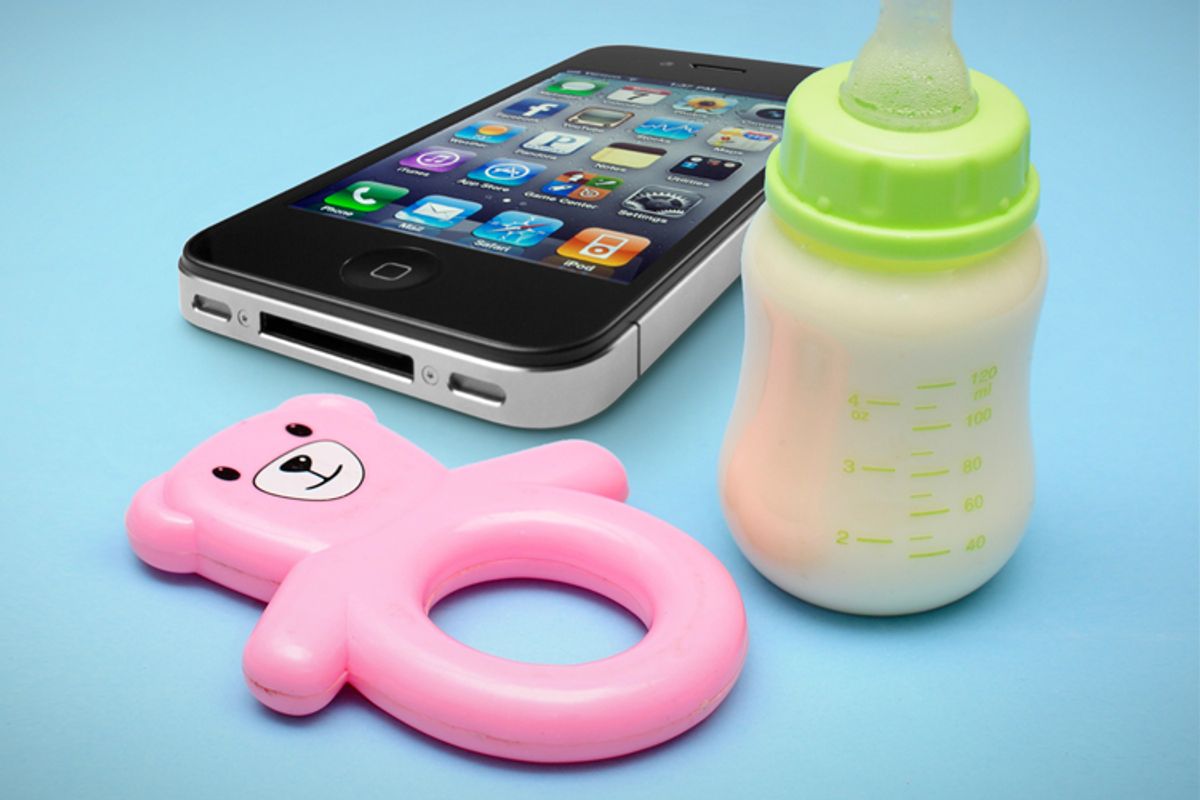 When I first gave birth and brought my baby girl home, I aspired to be the ultimate earth-mother-Gaia-worshipping-priestess from another dimension. Those first few weeks with my child I thought I had transcended all trivialities and was officially crowned the “New Age Queen of the Now.” I was so present in the moment, I put Buddhist monks to shame. Absolutely enthralled by my child, I watched her sleep for hours, finding peace in the sound of her breath. I avoided my phone and computer, and arrogantly decided everyone else was merely living a devastating life of distraction. The rest of humanity could be consumed with their technology and gadgets, but I had moved on.

A few weeks later, however, I discovered something no one ever warned me about: Babies are pretty freaking boring.

Despite my initial moral superiority, I looked longingly at my phone across the room, yearning to caress it. I was afraid that exposure to my phone’s evil waves would seep into my baby’s brain (even though men have them nestled in their pockets next to their precious packages all day), but the idea of interacting with my phone became more compelling by the day. There’s a whole universe inside there. Articles to read, seeing how many people liked my status update, friends to talk to, one more time with that status update, and Twitter feeds from celebrities to make me feel inadequate. Parenting can be isolating, and monotonous, and lonely, and monotonous. My phone is my connection to the outside world, and it was too hard to abandon.

Eventually I caved, and my relationship with my phone became a part of my relationship with my child. When breast-feeding the milk-sucking vampire indefinitely suctioned to my nipple for hours, I looked at pictures of my ex getting chubby and bald. After two jaded hours of pushing her on the stupid swing, and saying “yes, that is a plane” and “the birdies do fly,” I also listened to podcasts deluding me into feeling that I was part of an actual adult conversation. While endlessly rocking her to sleep, I could listen to Radiohead and drown out the gut-wrenching soulless rendition of “Wheels on the Bus” -- the lullaby version. At any moment I could take 10,000 pictures of her and of course a few selfies of me because my hair has been looking good lately.

When my baby became a talking toddler, I learned the next rule the parenting books neglected to mention: Toddlers are really annoying. They are unreasonable, demanding and relentless, and once they start talking, they never shut up. They also have no sense of time. My phone allowed me to get lost in some article about “Girls” and Lena Dunham’s body, helping kill the urge to throw myself against a wall every time my kid takes 25 minutes to walk 10 feet.

But then I did the unthinkable: I let my daughter into the world of my phone. I remember once being judgmental of parents who let their kids watch movies in the car. I wondered, “Why can’t those kids just stare out the window and imagine like I did as a child?” But now I get it. It’s just easier to give your screaming kid a cartoon to watch, or gently push your phone in their face when they are being obnoxious at a restaurant (somehow she always ends up on the video of an Indonesian baby smoking cigarettes, but at least she is quiet).

The phone serves as both a diversion from my boredom, and a baby sitter for my kid when I don’t want to deal. Does this mean that I am a lazier, more impatient parent than my mother who didn’t have an iPhone as pacifier? Yeah. It probably does. Yet I am also pretty convinced that if cavemen had iPhones, they wouldn’t have been so “one with nature” either. The seduction of the phone is hard to resist; our digital culture is one of immediacy and constant technological stimulus.  The phone taps into, and superficially satisfies, very primal needs in all of us. The desire to feel connected to others and the fear of dealing with the chatter of our own thoughts. I can’t remember the last time I took a dump, or waited in line for more than two minutes and wasn’t scrolling through my news feed just to avoid seeing where my mind will wander.

And so, I implemented a phone curfew. There are specific times, no matter what, when my phone is put away on silent. I am fully aware of the modern conundrum in even having to do that. The reality is that I will never get back these fleeting moments with my daughter, who is quite delightful even though she can’t tell the difference between a rhinoceros and hippopotamus. (I mean, come on, kid, one has a horn.) But addressing this addiction to my phone isn’t just about spending quality time with my child. It’s also about quality time with myself by developing a relationship with my phone that honors it as tool, but is not controlled by its temptress ways.  Unless the future turns out to be a Zombie Apocalypse, humanity is only going to create a deeper reliance on technology, new media and social networking.  Exposing my child to these elements of culture can’t be avoided, but I realize must be done with care and intentionality. Being a parent doesn’t mean shutting out the world; it means teaching your children to navigate within it.  Even if that results in your kid becoming a narcissist from looking at too many videos of themselves.