Are frat boys the new conservatives? 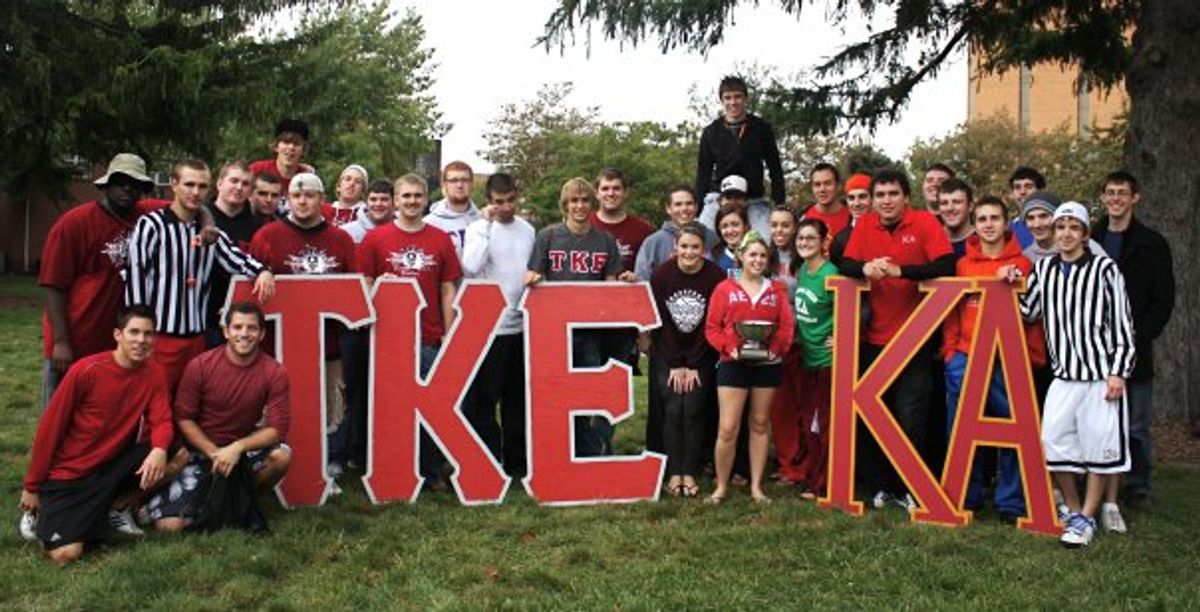 It’s long been a conservative truism that universities are enemy territory, stacked as they are with sandal wearing humanities professors and scientists whose research depends on empirical reality. But the ivory tower has probably never been as liberal as the right wants to believe: 51% of college graduates and 42% of “postgraduates” voted for Mitt Romney.

Even so, the academy’s supposedly implacable hostility to conservatives has been a career boosting foil for rightists from William F. Buckley to David Horowitz. But writing in Buckley’s National Review this weekend, Betsy Woodruff sees an emerging trend that could help level politics in the quad: Frat boys!

Using “quantitative analysis” which sounds suspiciously like a liberal plot, University of Iowa researchers found, “that on average, fraternity and sorority members enter college with more conservative political views than their peers. And while their peers became more liberal over four years of college, Greeks remained more conservative.”

Can the right going to channel this mysterious underground movement? Even Woodruff seems dubious. But for the time being she seems happy to seek common ground where she can find it. Madison Wickham, a founder of the website TotalFratMove.com said:

Merchandise pitched to conservatives — such as shirts that say “Mitt’s the Tits” and “Back to Back World War Champs” — sells briskly, suggesting that the Greek system contains a strong contingent of young people who lean unabashedly right. Like most members of their cohort, they tend to be socially liberal. But Wickham says Greeks are more likely to have an affinity for conservatism than most young voters.

"It’s become so generic and typical for college students to be liberal,” he says, that the definition of “cool” has almost reversed. “It’s cool to be conservative because everybody’s liberal.”

And 2002 Dartmouth grad Christopher Bowen tells her that the “expansion of petty bureaucracy brought out some of his brothers’ libertarian ‘don’t tread on me’ impulses, as he calls them.”

Hmmmm. Even Woodruff concedes what anyone who has ever been to a frat party already knows, that frat boy conservatism tilts more to the socially-liberal fiscally conservative variety. But at least true conservatives and frat boys can commiserate about bureaucrats and reporters:

Several students say a challenge for the Greek system is negative press from predominantly liberal campus newspapers. Christopher Warren, who graduated from the University of Georgia in 2012, said his fraternity consistently struggled with unfair coverage.

“The real thing we faced, even more than the bureaucracy of the university, was the on-campus media,” he says. “It was something we were constantly combating, having negative stories surrounding our fraternity or other fraternities on campus being the highlight in the school newspaper.”

Woodruff sees hope in frat boys’ interest in “professional degrees such as finance, law, medicine, and economics — instead of, say, women’s studies” but her article lacks a basic understanding of collegiate economics. Universities’ future health and prestige depends on donations from wealthy alumni. Schools have no interest in victimizing those privileged and practical Greeks who are the base of their future fundraising.

Today, for example, Johns Hopkins grad and Phi Kappa Psi brother Michael Bloomberg donated $350 million to his alma matter, pushing his total lifetime contributions to the school to $1.1 billion. The New York City mayor sounds a lot like one of those middle of the road socially liberal/fiscally conservative types. Is his donation going to make frat boys feel any less welcome on any campus?